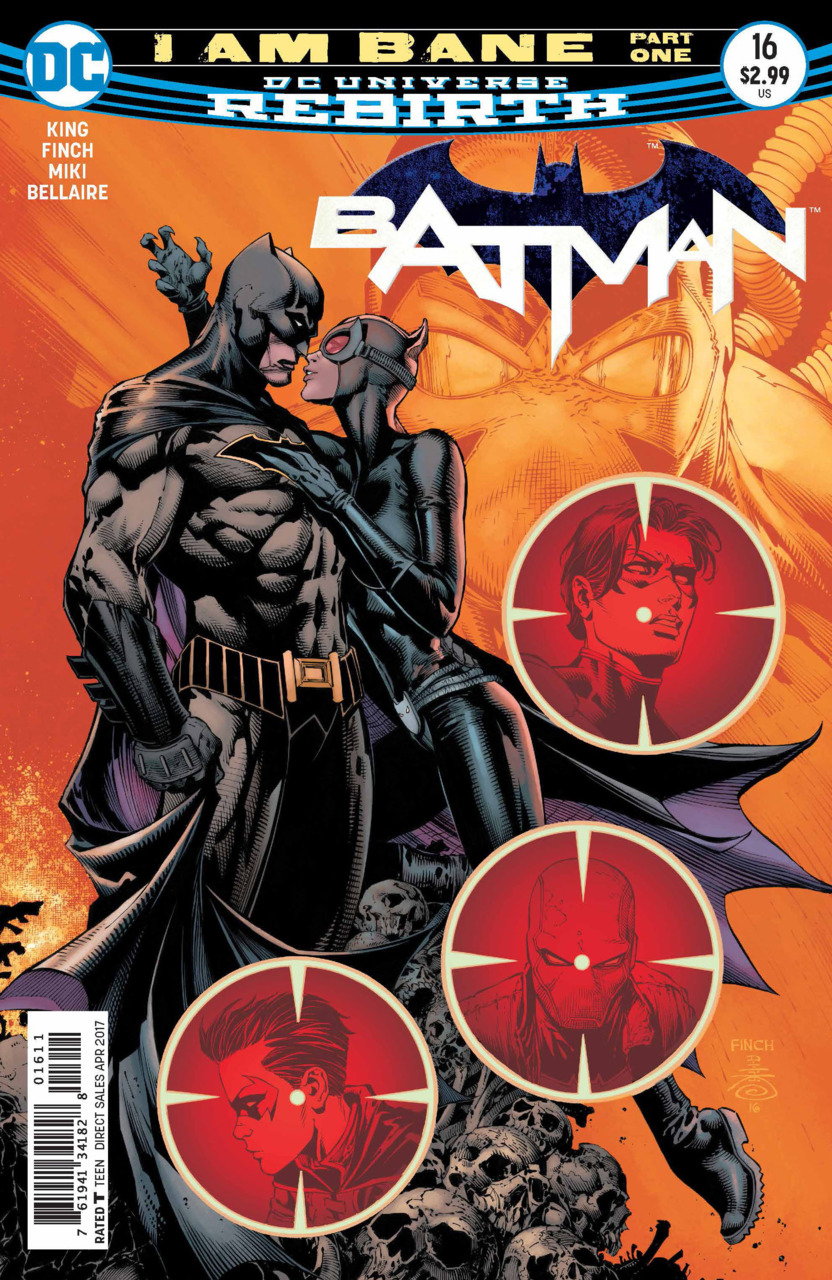 When I sat down with Batman #16, I had a lot of expectations.   Tom King is a great writer.   While a great deal of his Batman run so far has been lackluster,  he’s coming off the beautiful “Rooftops” story and momentum seems to be in his favor.  So here’s the question, does King deliver with “I Am Bane,” or was “Rooftops” a fluke?

We open in Arkham where Batman is checking in on the incarcerated Psycho Pirate.  The action kicks right off as Bronze Tiger helps to expose the security escorts as an agent of Bane.  Batman has the proof he needs – Bane is defying Batman’s advice from issue #13 and is coming to Gotham. Cue, the talk. We’ve seen it before. Bad things are coming and Bruce is warning the family,  going so far as to tell them to leave town, ASAP.  Bane is after the Pirate, and Bruce needs him for five days to save Gotham Girl before he can destroy the source of Pirate’s powers, the mask.  Duke is the only member of the family to (seemingly) heed the advice, though.

What follows is a brief interlude where Catwoman sets off the Batsignal to secure a quick meeting to pledge her help.  Batman, of course, refuses and lets her escape custody again as Gordon arrives to see who is operating the signal without approval.   Classic Gordon.   Later that night Bruce prepares Gotham Girl for her first (of five) sessions with the Pirate to cure her terror spells.   The duo, along with Alfred, head to the Batcave and are stopped dead in the tracks when they see a gift from Bane – three bodies strung up, bearing a striking resemblance to Dick, Jason, and Damian.

At first glance, it really doesn’t appear like much has happened in this opening installment.  There are only a handful of scenes, but the depth King gives to each one is what makes this issue a success.  He does a great job of using the supporting cast to set up the story.  Bronze Tiger is there to give us insight into Bane’s state of mind.  His crumbling will to survive without Venom is amping up how dangerous is.  The Bat-family is there, showing us what is at stake.  Gotham Girl’s brief return is there to show us what Batman is risking everything for – to help someone who needs it.  Someone who saved his life all the way back in the “I Am Gotham” arc.

The way King writes the cast makes me wish this wasn’t a solo book.  King seemed to really have fun with the scene at Batburger, a watered-down fast-food version of Kingdom Come’s Planet Krypton.  The boys felt like an honest family, together until the end.  The bickering.  The goofing around.  They are brothers in everything but blood.  King’s dry humor was played just straight enough that the scene didn’t feel completely out of place with the somber nature of the rest of the issue.  The balance between the dark and light is difficult to pin down, but King has done an admirable job.  Finch and Bellaire are at least partially responsible as well, as the art keeps things fairly fresh.  Finch is a capable penciller, but the presentation is somewhat bland.  It’s hard to not compare his work to Mikel Janin’s.

This is a great start to the story.  Plenty of setup and great cliffhanger have gotten me invested.  I’m happy to say it seems like King’s found his groove. I’m still laughing to myself about the Jokerized fries.