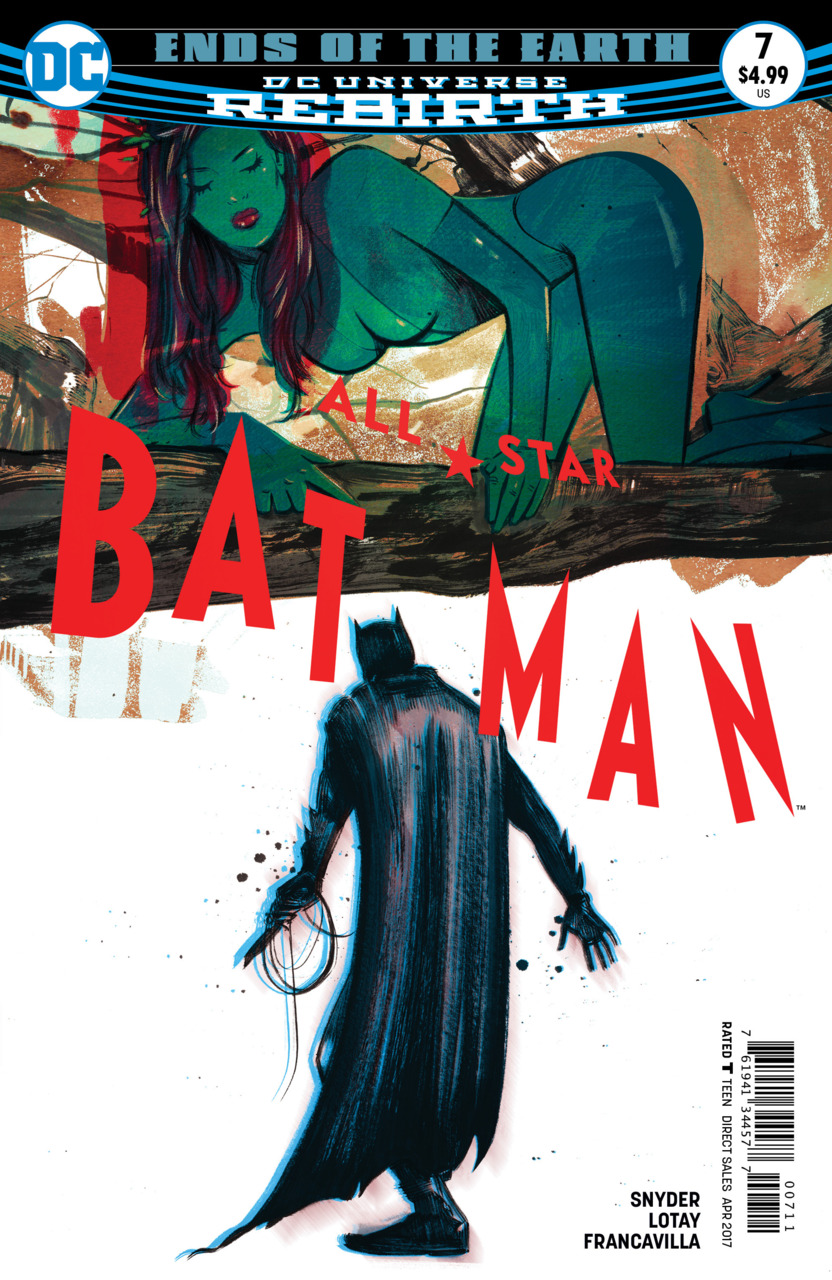 Synopsis: In Nevada, Pamela Isley is making her way to Death Valley… if it wasn’t for the chatterbox in the convenient store that won’t ring her up. He talks about his kid, and how he wants to go to art school, but he doesn’t want to pay for that. He also mentions some people who were asking about her the day before. Pamela (using her pheromones) convinces him to tell them that he never saw her, and that he should pay for his kid to go to art school.

Isley gets into her Jeep, and heads to the middle of Death Valley. Which seems like the very last place you’d expect to see someone connected to the Green (assuming that’s still the case). She comes across an old, dried out looking tree in the middle of the desert. She gets to work. She’s still a botanist after all. Creating plant life, and then studying it — seeing what it can do. She hears something outside of the tent she’s set up, and finds Batman walking toward her site. She freaks out, as most of us would if we saw Batman walking toward us. And it’s unclear as to what happens exactly, but Batman has a new suit that grants him the ability to either teleport short distances, or to turn invisible. Either way, she looses him and he appears behind her. Isley does manage to get her vines to grapple with Batman as he explains to her that he’s here because he needs her help.

A young girl, Lilith, was infected by the ancient bacteria Freeze released last issue. Batman believed that he destroyed it all, but he must have missed something. Some of it got into a section of woods. Lilith loved botany. She went to that forest to tend to her garden, and became infected. Also, the strike force that destroyed Freeze’s base is coming for Ivy’s base too. They are afraid she’ll take advantage of the situation & kill the rest of animal and human life. Isley tells Batman that she believes the Tree of Life was real. That it had many healing properties. She’s trying to find it, and with it find ways to help mankind. She wants to make people better. That’s what she uses her pheromones for. To influence people for their good. But because it’s against their will, she’s a bad guy. She’s also looked at this bacteria. Batman plays it off that he needs her to save Lily, but Ivy knows she’s already gone. Ivy has found plant life that found help stop the spreading of horrible diseases. But it has placed a lot of pressure on her — making the call to save mankind.

The strike force surrounds their tent, and Ivy kisses Batman, and tells him to fight for her. He does so, and well, even though the strike force is using a cloaking system. They nearly get Ivy with a flame-thrower, but Batman stops them in time. However, it didn’t save the tree. All her work – gone. Batman pulled the trick used in Batman and Robin however, and wore wax lips the whole time. He fought for her on his own. This gives Ivy hope in man again, and she gives him a flower – of which he might be able to synthesize a cure. She wants him to clear Lily’s name of this disease. Don’t let them name it after her.

Throughout, the comic counts down the hours from which Lily contracted the disease, until her cremation. It only took thirteen hours.

Thoughts: I really enjoyed this issue with a focus of Poison Ivy. Telling it from her perspective really made you get the character, and Snyder is a good pairing for her. His expositional science ramblings make sense for a botanist. However, he continues to give Batman strange and (as far as plot goes) pointless gadgets. He also points out that this strike force has been following him since his incident with Dent, but I don’t recall them at all in that story. I love what Snyder has done with the past two issues, but it feels so off from what this story started out being. It’s kinda jarring to go from a five issue arc, to single issue stories. I feel like he could have shortened the Two-Face story, but maybe I’m jumping the gun on the overall theme. We won’t really know until this series wraps up. Tula Lotay’s art is gorgeous. She’s a perfect fit for a Poison Ivy story. On page one, I thought it looked great. Page two, I knew she was a great storyteller. Page three, she showed some diversity. Page four, I was wowed with her attention to detail. It’s a simple establishing shot, followed by her just traveling through the desert, but it’s overlaid with a map of the area, adding texture and a sense of direction when really there is none. No one could ink this better than herself, and the colors are breathtaking. Steve Wands letters, and I loved the green text when she is influencing someone. I know that’s something they’ve been doing for the last few years in comics, but I love that simple, subtle addition.

Backup Synopsis: Duke is trying to solve a Riddle with his parent’s life in the balance. He is too late, but before anything happens, Bruce turns off the machine. Duke was just training in the Mud Room. Duke is getting frustrated that he can’t find his place on the color wheel. Bruce sends him to bed. He’s not going on patrol tonight. He needs more time. However, when Alfred comes to give Duke his breakfast, he’s gone.

Backup Analysis: Scott Snyder’s backups just aren’t doing much for me. Maybe as a complete story they will work, but it’s too chopped to tell a cohesive story. He’s be better off giving us a brief character moment from Duke, as opposed to giving us an origin for his crimefighting. Francesco Francavilla’s art is as bold and beautiful as usual. The simplicity of the style, coupled with the select few colors and the heavy black inks make every page pop.