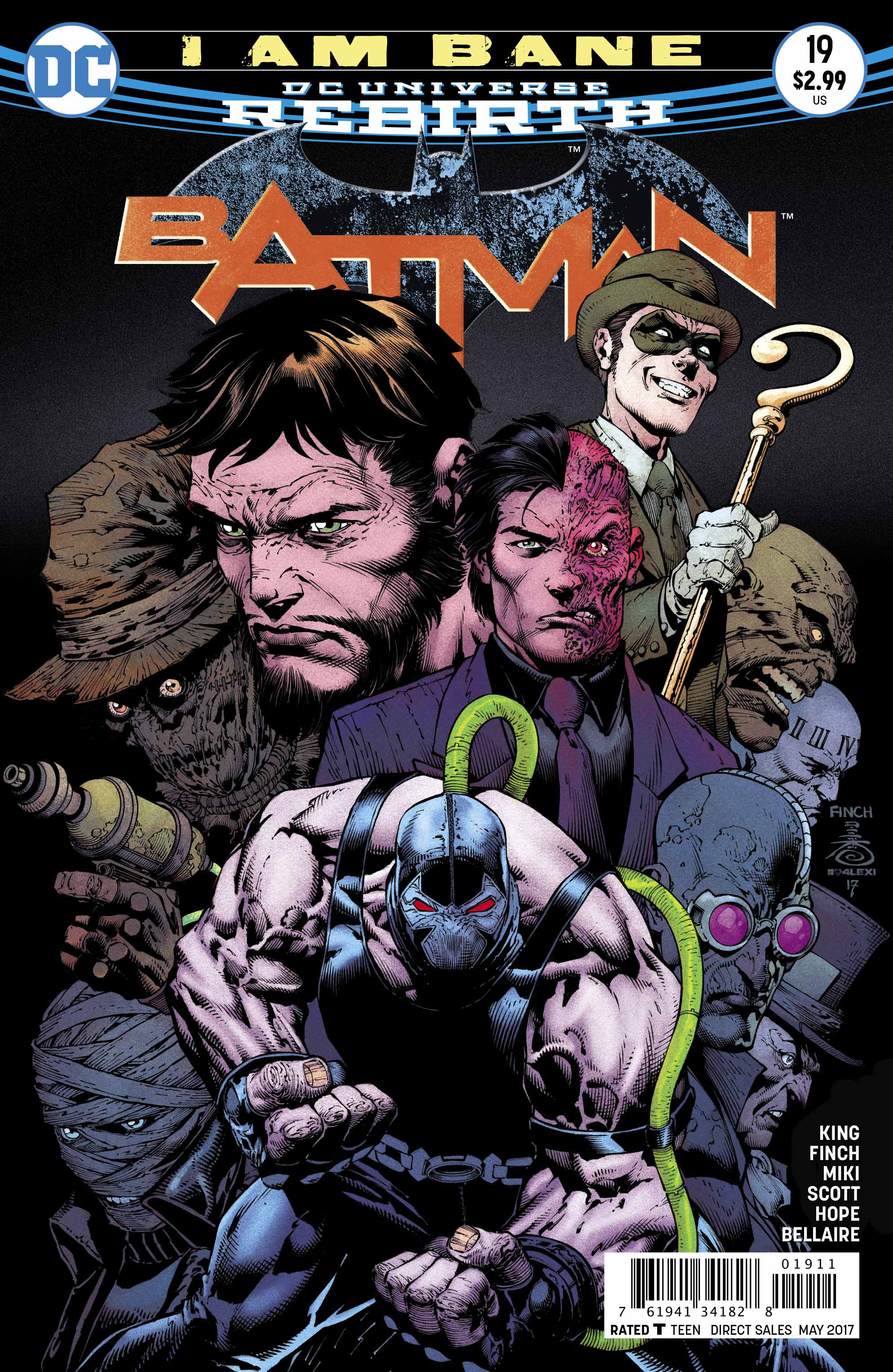 As Bane forces his way into Arkham Asyulm, he is greeted by self-proclaimed deity Maxie Zeus, reciting the words written above the Gate of Hell in the epic poem Dante’s Inferno.  It may seem a little heavy handed, but it’s effective and a great way to kick off this romp.  King quickly gets to work showing exactly how ruthless and determined Bane is.  Batman’s next line of defense is the inmates of Arkham themselves, who he has released and given a choice:  bring Bane down (alive) for the possibility of better treatment or get out of the way.  Handfuls of villains take him up on the offer.  Two-Face, Solomon Grundy, Amygdala, Scarecrow, Mr. Freeze, Firefly, Black Spider, Flamingo, Man-Bat, Zsasz, Mad Hatter, Dr. Phosphorus, Hush and Copperhead all stand up to Bane, but are put down throughout his rampage deeper into the facility.  Throughout the chaos, Bane is very adamant about his anger.  He opines about Batman forcing this confrontation because of his actions in coming after the Psycho Pirate.  Alfred is critical of the plan to use the villains in this way, but the cannon fodder did wind up serving a purpose – the gauntlet took Bane the entire day and gave Batman some much needed recuperation time.  The two face off one last time as the seconds tick down on what’s left of Day Four.  (I seriously feel like I’m writing a recap of an episode of 24 here.)  Maxie Zeus, of course, is back to close us out with more words of wisdom.

“And the just man rages in the wilds.  Where lions roam.”  William Blake’s The Marriage of Heaven and Hell.

There’s much more to unpack in this issue than at first glance.  It was a quick read, but upon subsequent re-reads I’ve picked up a lot more on the nuances of the story.  I love the literary references.  Bringing in Maxie Zeus as a sort of ring announcer was a great addition.  He has the pomp and circumstance that really makes it all feel natural, like the overwhelming absurdity of comic book superheroes and villains is somehow grounded.  It really put me in the right frame of mind to enjoy the story.  Seeing a wide sampling of Batman’s rogues gallery was great as well.  The entire rampage was an amazing inverse of the Knightfall storyline  (down to the fact that several of the characters take part in both stories) where Bane released Arkham villains that Batman ran through.  Only in Knightfall, each battle wore Batman down until his eventual defeat.  Here Bane seems to be gathering momentum as he tears through the characters, using more and more of the venom.  The scene where Bane, by sheer force of will (and venom), overcomes Scarecrow’s fear toxin is easily one of my favorite moments with the character.  Other villains may have deeper emotional arcs or more strategic approaches, but Bane has always been about the power.  Here that aspect of him is on full display, and I’m loving it.  Batman better have one hell of an ace up his sleeve for the closing installment of this story, because Vegas odds are on Bane winning at this point.  He’s been built up for too much to go down easily.

David Finch had a fun time drawing this issue, it seems.  It was quite the undertaking and he did admirably.  The number of characters present makes my hand wince in pain.  He doesn’t let it slip, though.  Each character gets great treatment.  I’m still not a fan of the Riddler’s sideburned appearance, but that’s hardly Finch’s fault.  He does forgo some background work throughout the issue which was somewhat distracting.  Not on the level of someone like Jae Lee, but it was noticeable.  Finch has been keeping up the cinematic approach to the visual storytelling quite effectively, and with his team of inkers has given depth to each of the characters.

I’ll give Rebirth this, the story arcs wrap up quick.  It feels like just yesterday we were introducing the “I Am Bane” story and now we’re one issue removed from the close of Tom King’s third major Batman story.  As long as they stick the landing, this could go down as one of the better stories in recent memory, despite how rushed it all seems to feel.