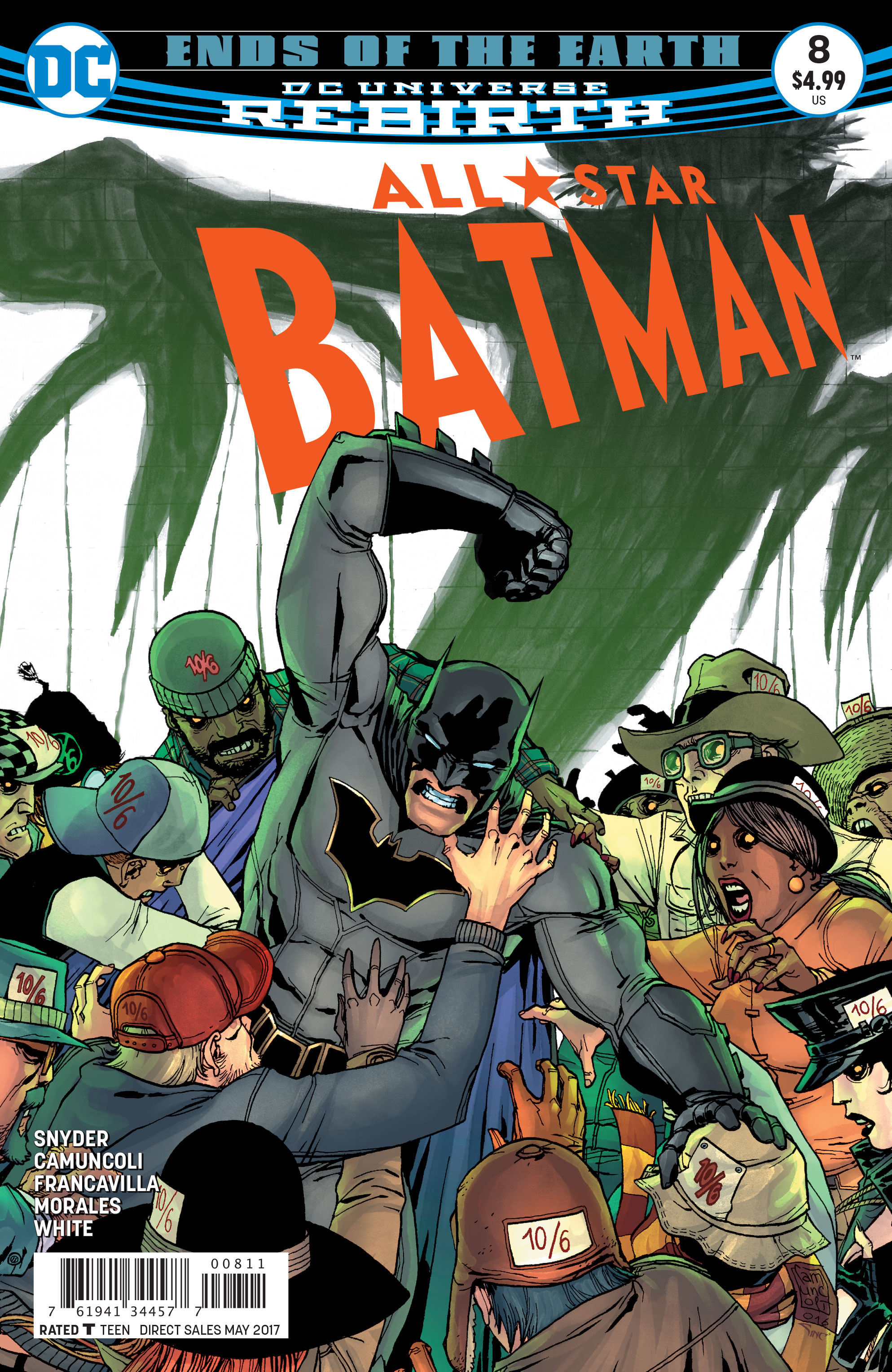 … To catch you up… Some time ago, Batman stopped a bacteria that threatens the life of every breathing thing from being released. However, that bacteria was released anyway. Batman has stopped it from spreading any further, but is trying to find the person/people responsible…

Synopsis (Spoilers): Batman rises out of the Mississippi Delta on his way to his next suspect… Jervis Tetch. He talks of something he calls the “window moment”. When a realization comes that points all the clues in the right direction. Something he learned in his early days. Something he’s trying to pass on to his new protege. Duke was studying the dubbed, “death patch”, making sure to alert Batman if it does what bacteria does – mutate and overcome the cure. However, and hour ago, Duke went missing. During this trip across America, Batman has been followed and interrupted by a military group known as the Blackhawks. Their job is to take down apocalyptic threats. They are armed with high tech weaponry and armor that tracks your eye movement and tricks it into seeing what isn’t there… Obviously, they are suspects in Duke’s vanishing, but they are also suspected as the intruders impersonating Batwoman, Nightwing, and Red Hood who currently have Batman wrapped in a net. But minor ticks – how Red Hood is drawing with his right weapon before his left… or when Nightwing triggers the electric current in his escrima sticks before he lunges, they give themselves away. Batman quickly takes the team down, and sees the Blackhawk’s branding on their clothes underneath. An alarm sounds, giving away Batman’s arrival.

He goes inside, knowing Jervis is expecting him, as he meets him at the stage. Batman tries to rattle his cage, but Jervis is too fast and counters. Batman threatens to blow his mansion to the ground. He’s placed explosives all around, and he has the detonator in his hand. Hatter begins talking, explaining he knows who is behind all this… it’s Batman himself. See, none of this is real. It’s all been a dream. Remember when they first met? Jervis was offering a device you’d place in your hat. Alter the reality you live in… see the world as you want. But Bruce rejected it! Cut him off before his pitch was over. A “potential danger”, they said. However, he put the device in Bruce’s old hat (the one from Zero Year) without him noticing. See? Hatter still has it… he remembers that night. Bloodied and bruised, looking out that window… is this his “window moment”… was everything a lie?… see, there’s a safe word to trigger the experience once you’ve worn the hat. It’s always a phrase from Alice in Wonderland. And the one for him was “Twinkle. Twinkle, Little bat…” and he waits for Bruce to finish his line. Batman grabs Hatter, about to end this, but he gets stronger. See? He brought friends. Band, Catwoman, Joker, Harley, Riddler, and himself (to name a few)… the clock that leads to the cave that also represents the rabbit hole? The is it a coincidence that all these things are a reflection of Alice in Wonderland? He’s living a fake life, and Jervis can show him the reality… Bruce, last heir to the Wayne fortune, a broken man, cared for by the family butler.

Batman pushes the button that sets of the explosives, that set off Hatter’s mansion, Hatter’s illusion. He takes down his rogues gallery, and sees that they were Blackhawk soldiers who were living the illusion as well. Hatter attempts to strangle Batman, but another explosion sends them both out a window. The “window moment” has come and things are clearer than ever. ‘If this is a dream, I never have to hold back when hurting him again, do I?’ He pushes Jervis face-down into the swamp. He’s seen through the illusion, and Jervis knows it. When he comes back up for air, he’s ready to talk. But he’s taking his sweet time doing it. See, time is of the essence.

Analysis: Wow… just wow. I’d never thought I’d enjoy reading a story with the Mad Hatter. However, Scott Snyder breathes new life into this character. I had imagined writing a story in which it’d be a totally different character, but Snyder does this character justice without doing a complete re-haul. The structure of the story, the pacing, the first person viewpoint all make this one amazing book. This explored something with Batman that I am fascinated with, that Batman is perfect for; Snyder has said multiple times that he explores his worst nightmares with Batman, that generally being death. Here; however, he explores my worst fear; that of going insane. To me, that is a fate worse than death, and it’s done spectacularly. The mind-warping parts that the Hatter takes Bruce (and through him, us) on, was an incredible experience. Snyder makes us feel how most people feel after they have some of Hatter’s tea. I have been loving the incorporation of different villains, creating a one-issue chapter telling a much later story through its interconnected parts. Something I’ve had a problem with in terms of previous issues of All-Star, was Snyder’s over reliance of tech that seemed unnecessary in terms of story… like it was just there to look cool. I prefer the instance here, where Batman is much more simple in his approach. And especially this panel, where he uses a FREAKING FLAMINGO TO BEAT FAKE-WING UP WITH!!! Giuseppi Camuncoli’s storytelling here was amazing. The structure and layouts were incredible, and really gave credence to the story being told. It mirrored the script perfectly without being to blatant about it. Subtlety was key. I’ve seen this guys work on Superior Spider-Man, but this was a new level for the guy. His stuff was great here. Please, Giuseppi, get yourself a gig on a Bat-book.

Mark Morales inks this issue, and does a fantastic job. His clean style just enhances the things everyone around him are doing. There was a panel or two, where he inked out the silhouette and left the eyes, reminding me of the Animated Series… *sweet childhood memories*

Dean White continues to murder it. I’ve never seen him on Camuncoli’s art, but it’s a perfect match. The texture he brings to the backgrounds make it feel like you are watching Batman fight crime during a freaking sunset. It’s just gorgeous stuff. The way these guys do light is another thing that impresses me, as it looks so natural.

Back when I reviewed Snyder and Capullo’s Batman run, I fully admitted that Steve Wands was the best letterer in comics, but the last few issues of All-Star Batman has blown me away. The bubble-less comic format has been a breath of fresh air. It adds a new style to storytelling that isn’t very common, but still completely works. I swear, this style would make for an easy transition for your friend who is into novels, but hasn’t gotten into comics yet… let them try this comic. Also, the font the guy uses is genius. It adds personality to these characters, and gives them a voice when you read it.

Backup: Duke goes back to the Lucius Fox Center for Gotham Youth, and we get to see Julie again! Duke has lost all confidence in himself and feels like he can’t be a hero. He visits with Izzy, and she gives him a pep talk. He heads back to the Manor to suit up, but is met at the staircase by Daryl and his Jokerized-parents. It’s hard to pick this apart and dissect this story right now, so I’ll save that for when it’s complete… but Jeez is Francesco Francavilla’s art is beautiful. I love his thick, inks paired with his “pop-art” colors (I hope he doesn’t take offense to that, because I don’t mean that in a negative way). The contrast it gives makes everything… well… pop.

Pick Up or Pass: Buy for sure!

In Conclusion: With the constant rotation of All-Star artists, paired with the consistently great Snyder and Wands, makes this book live up to its name.