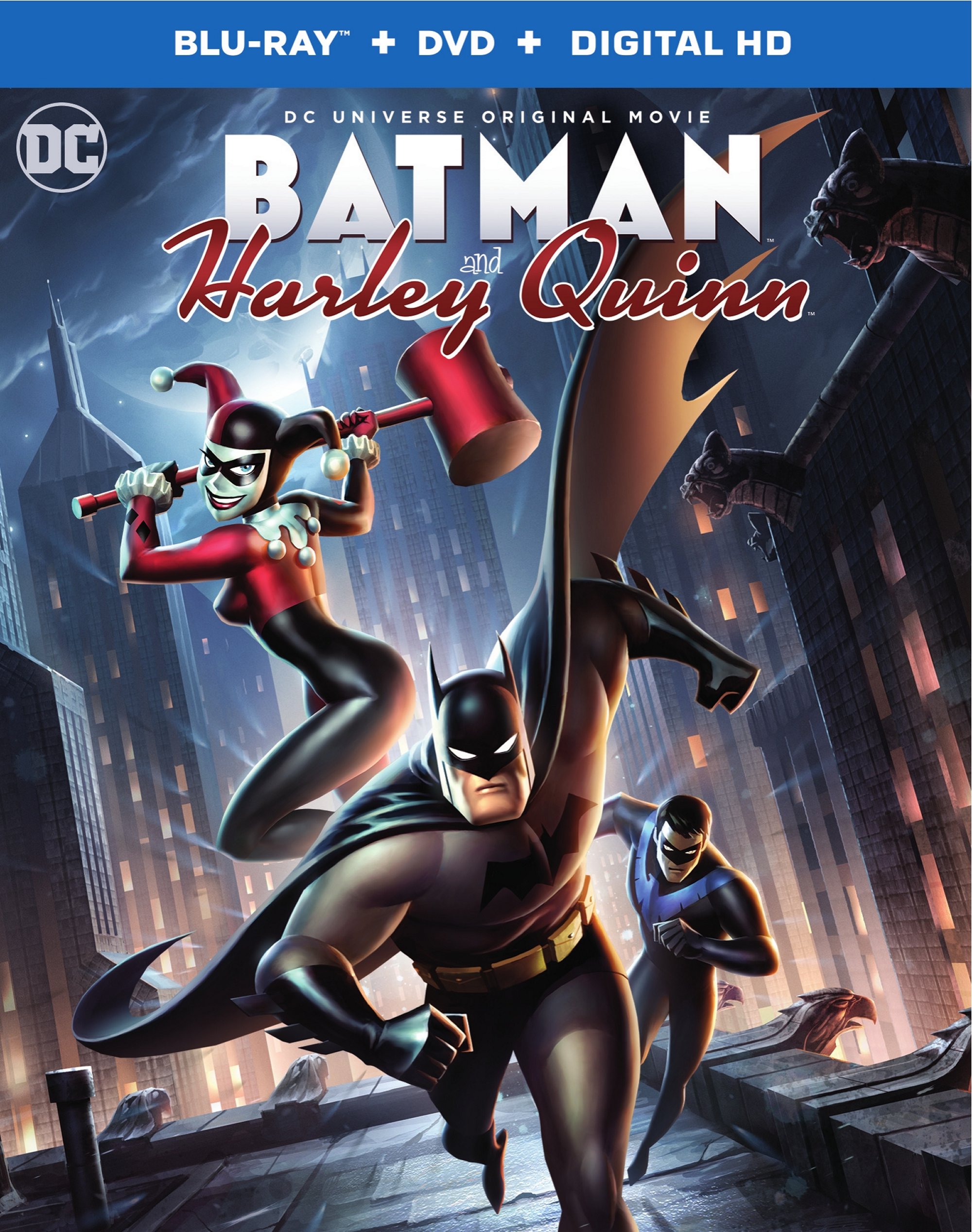 Overview: In a comedy set in the style of Batman: The Animated Series, Batman and Nightwing begrudgingly enlist a reformed Harley Quinn to stop Poison Ivy and the Floronic Man from destroying the world.

Synopsis (spoilers ahead): The film opens at Star Labs where Poison Ivy and Jason Woodrue, aka the Floronic Man, are stealing computer files related to Dr. Alec Holland (aka Swamp Thing) which then cues the title sequence.  The story cuts to Batman and Nightwing in the aftermath of the Star Labs crime scene where they learn that the file that Poison Ivy stole was a file on Holland’s transformation into Swamp Thing.  Batman goes to figure out what Ivy and Woodrue are planning while Nightwing goes to find a known associate of Ivy, namely Harley Quinn.

Batman meets with an A.R.G.U.S. agent Sarge Steel and connects Ivy and Woodrue’s crimes to the research of Harold Goldblum, a missing scientist.  Nightwing tracks Harley Quinn (and by track I mean walks by and randomly looks in the window) to a restaurant called “Superbabes”, where waitresses walk around in skimpy versions of the costumes of female heroes and villains.  Harley Quinn is working as a waitress (dressed as the Post New 52 version of Harley Quinn) and Nightwing watches as Harley beats up a grabby customer.

Nightwing approaches Harley in an alleyway and the two end up fighting until Nightwing gets taken down by a dose of Joker venom.  Nightwing wakes up tied to Harley’s bed and the two proceed to have sex off screen.  The film then cuts to the captured Goldblum being mind controlled by Ivy while he works out a formula for Ivy and Woodrue for a virus.  Batman tracks down Nightwing and Harley (now dressed in her original Animated Series costume) engaged in a tickle fight, with Harley now agreeing to help track down Ivy.

The three of them ride off in the Batmobile while Batman explains that Ivy and Woodrue’s plan is to unleash a virus that will turn humanity into animal/plant hybrids at best or kill everything on the planet at worst.  There’s a brief interlude where Harley leads them after an ex-boyfriend, after which she takes them to a bar for supervillain henchmen.  Harley meets with one of Ivy’s old minions and after a couple of karaoke numbers and a bar room brawl, they head off to Ivy and Woodrue’s lair.  A confrontation follows, with Goldblum mortally wounded by Woodrue as he and Ivy make their escape.

Goldblum’s dying words reveal that Woodrue and Ivy need swamp water to complete their virus and Batman, Nightwing, and Harley follow Ivy to the swamps of Louisiana where Swamp Thing was created.  While Ivy works on completing the virus, Harley seemingly betrays Batman and Nightwing in order to get close to Ivy and a final battle ensues.  Harley proceeds to convince Ivy to give up her plan by, ahem, making a sad face and threatening to cry until Ivy changes her mind.

A final confrontation with Woodrue threatening to release the virus is interrupted by Swamp Thing, who makes a brief speech and disappears without interfering.  All appears lost until Harley points out that Woodrue is covered in leaves and probably flammable and the movie ends with Batman and Nightwing kissing Harley on the cheek ala “I love Lucy” and Woodrue is defeated off screen and shown in a midcredit sequence running through the swamp on fire.  After the credits, Harley is shown to be the new host of a reality game show.

Analysis: One of the reasons I was looking forward to this film is that the marketing makes it look like a throwback to Batman: The Animated Series, and the movie kicks off with a strong action sequence that supports that notion.  Then the opening credits kick in.  The title credits are light and cartoony and set the tone for what your about to see.  The style of the movie is certainly Bruce Timm’s designs and I’m a sucker for seeing blimps and a red night sky over Gotham City, but the reality is that this film doesn’t really have much to do with Batman: The Animated Series and setting it in that style hurts the movie because it sets up expectations that it doesn’t really deliver on.  Make no mistake, this movie wants to be a comedy first and foremost.  The film would have been much more successful if they had gone with an animation style that didn’t suggest something that it’s not.

On the positive side, Kevin Conroy will always be the voice of Batman as far as I’m concerned and its great to see Loren Lester return as Nightwing.  The henchman bar scene is packed with cameos from the animated series and does a nice call back to Batman ’66, and the whole sequence is the stand out scene for me in the film, one of the only sequences where the jokes landed and had me laughing.  There’s also a very funny scene involving Booster Gold.

The big controversy with this film already seems to be the Harley/Nightwing fling.  Its unnecessary and isn’t true to Nightwing’s character, but it’s a quick and rather forgettable moment.  I actually enjoyed the majority of the interaction between Nightwing and Harley, with Nightwing seeming to be able to relate to Harley on a level that Batman won’t.   The bigger problem is with the overall tone of the movie, which keeps straying off in an odd sexual direction that is super juvenile and frankly, off-putting. I’m not really sure for whom this movie was made.  The target audience for these films is usually the 18-49 year old bracket, but the film makers seem to have a 12 year old boy’s understanding of what a “grown-up movie” is, where they throw in unnecessary sexual themes and language, not because it serves the story, but only because they can. At the same time, the movie takes immature detours like Harley farting in the Batmobile that also derails the film.

Given her work on “The Big Bang Theory”, Mellisa Rauch on paper seems like she’d be a perfect Harley Quinn, but she comes off as more of a parody of Harley Quinn then the genuine article.  Its fitting that she’s introduced as a waitress in a knockoff Harley Quinn costume because that’s what she feels like.  They give her a quiet moment where she’s walking home from work doing the crossword puzzle to let you know that she really is smart, but that’s really the only moment in the film where they let her do anything intelligent.  Having Harley “defeat” Ivy by crying until Ivy promises to not kill everyone is insulting to both characters and to the viewer’s intelligence.  On the plus side, after spending a long time in her origins as a submissive victim of the Joker, the story makes a definite attempt to show that Harley is not that person anymore and comes across as tougher and more world weary.  I also appreciated that other than one reference, the Joker sits this film out, which is appropriate as Harley has in in recent years moved out of his shadow.

The film’s biggest problem is that it is so busy trying to be funny with varying degrees of success, that it forgets that it still has to be a film.  The end of this movie is an absolute mess.  The film keeps building to a reveal of Swamp Thing but then doesn’t pay it off in any meaningful way, with Swamp Thing appearing, making a speech, and then leaving without adding anything to the story. I can’t help but wonder what was the point of including that character.  The filmmakers then wrap up the story quickly with Woodrue being taken down, off screen, with the heroes lighting Woodrue on fire at Harley’s suggestion.  There’s nothing wrong with the filmmakers wanting to make a movie with a lighter tone, but you still should tell a story with a beginning, a middle, and an end. There’s no follow through any of the set up in the first two acts of the film and it comes across as lazy.

The extras include a quick featurette about Harley Quinn and a sneak peak at the next animated feature, an adaptation of Batman: Gotham By Gaslight, which looks to be a very different film from the source material.

Final Thoughts: With all the call backs to Batman: The Animated Series, I truly wanted to love this film.  The truth is once you get passed the trappings of that beloved show and look at it on its own merits, it’s just not a very good movie.  Between this movie and the missteps in adapting the Killing Joke last year, Warner Animation is burning through a lot of the good will that it has built up over the last 25 years and frankly makes me doubtful in a successful adaptation of Gotham by Gaslight.

Editor’s Note: Batman and Harley Quinn is available today on Blu-ray and DVD, and has been available digitally for the past few weeks. You can order your copy of the Blu-ray by heading over to Amazon now.