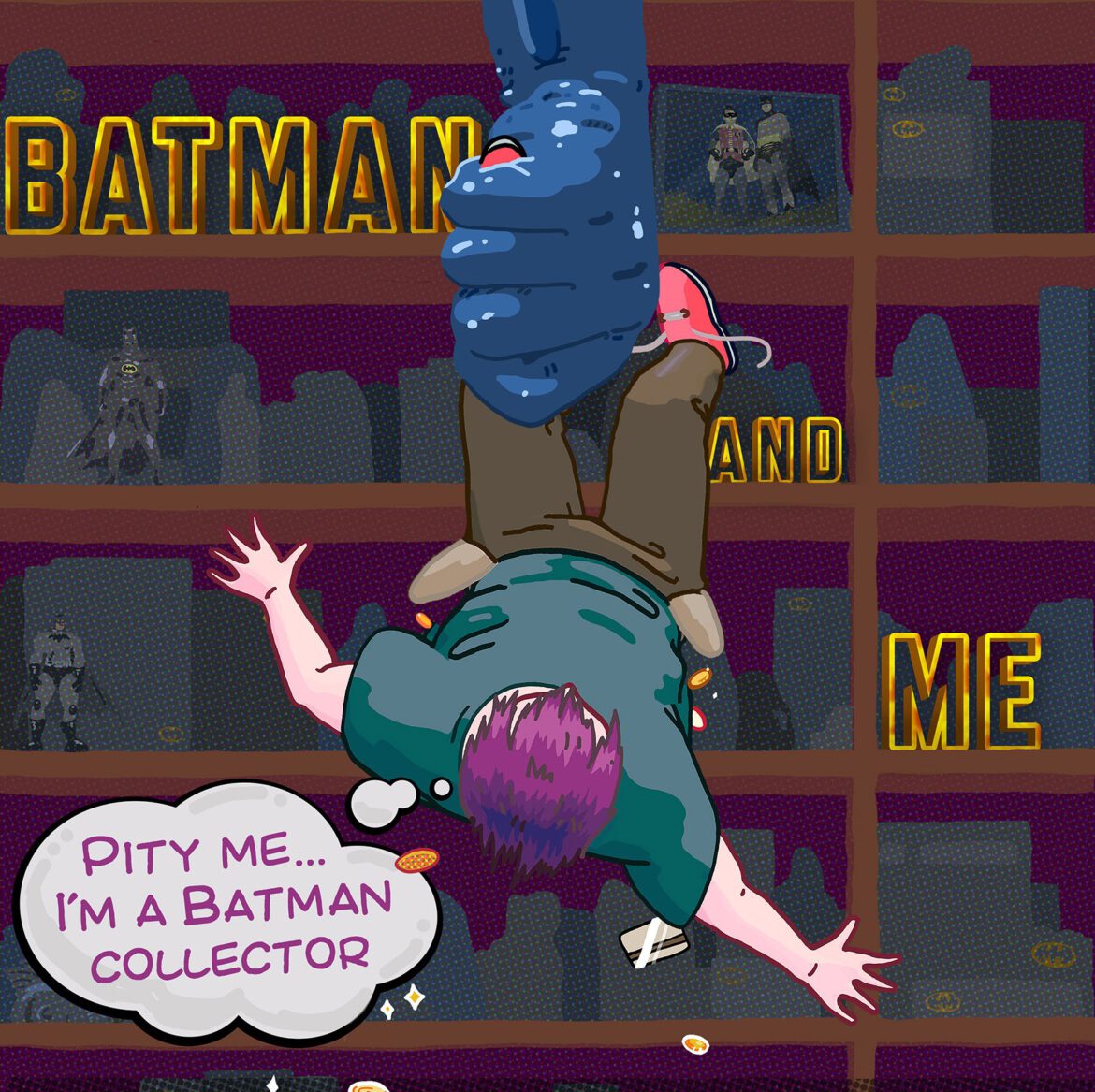 Overview: I’m sure many people reading this are collectors of Batman memorabilia, action figures, and comics, but the documentary Batman and Me or Pity Me! I’m a Collector shows that collecting can have a potential (but overall harmless) dark side. The film focuses on an obsessive Batman collector who tries to get over his addiction.

Synopsis: The Batman and Me documentary opens up with a montage of “Batmania” that swept the world in 1989. Clips of all the merchandise, the action figures, the t-shirts, the posters, and the cereals fill the screen. Anything that you could think of, they slapped a Bat-logo on it in 1989, and people bought it hook, line, and sinker. Merchandise for the film grossed over a staggering one billion dollars.

People that missed out on the Star Wars collecting boon were the first in line for the wave of Batman merchandise that was coming. People like Darren Maxwell (AKA Dags). Dags is a collector who resides in Australia. Dags grew up a big Star Wars fan and started collecting movie posters when he made friends with a fellow collector. That friend showed him a gateway to a whole new world. Dags started collecting poster and soundtrack records which he claims that he has never even played (“I hate them!”).

Darren felt pressure from his group of friends who are in the collecting/pop culture community, so he decided to start buying Batman items. He wasn’t just buying some Batman items here and there. He bought any Batman item he could find. He was not even that big of a Batman fan. He was a fan of the films, so he bought everything from 1989 to 1997. Dags knew that once he bought one item that it would become a monster, so he made two rules for himself: 1) only buy Batman items and 2) never take it out of the box. Because of that second rule, Darren has items that he doesn’t even know what they look like because they don’t have a plastic cover on the front of the box.

Darren’s little Batcave is a sight to behold. Any action figure that you can think of from Batman ‘89 to Batman and Robin is in there. He became known as “the Batman guy,” so friends and girlfriends would always buy him Batman-themed gifts around the holidays. There are two interesting stories about Darren’s collecting. One is that he bought a chocolate bar promoting Batman Returns, which he still has today. He keeps it in his fridge and puts tape over the container so it will never open. The second story is, at the height of his collecting obsession, he once bought a Batman shirt off a man’s back. He told the man that he would buy it from him and that he can’t ruin it while eating, so he bought it,  washed it, and put it away in his Batcave.

Even though he knew his collecting was becoming an all-consuming thing, and despite not being that big of a Batman fan, he felt compelled to keep collecting to keep up with his friend group. It wasn’t until he saw Batman and Robin that he decided to stop collecting cold turkey. He didn’t like Batman and Robin, so he felt that he had to stop.

He still has his Batman collection and won’t give it up, but he doesn’t go into the room unless people ask. He would sell his collection as one whole lot and not piece by piece. Dags traded his obsession with Batman memorabilia to focus on directing short films. He has directed short films between 2000 and 2012.

The director, Michael Wayne (no relation to Bruce I believe), feels that Darren was a slave to fandom and that he liked the image of collecting. Dags liked the movies but was more into the merch and what is known as “The Batman Guy” brought to him and his life.

A running storyline throughout the documentary is that one of the first Batman items he bought was a board game for Batman ‘89. He opened it, and it stuck out like a sore thumb in his collection because he has the board games to the other movies unopened. That open board game is Darren’s greatest regret. Two years later, Wayne returned to Australia to see Darren again for an epilogue of some sort. Darren still had his entire collection, and it was finally completed when Michael Wayne gifted Darren an unopened Batman board game.

Analysis: For a trip down memory lane and a look at all the toys that many fans grew up with, this documentary is worth it for that alone. The eight-year-old in me is jealous that Darren has the Batcave playset from Batman Forever and never opened it!

One cool thing that Michael Wayne did with the documentary was to use action figures to create reenactments of Dags on his adventure to buy his figures. Shout-out to the use of the Ray Stanz Ghostbusters action figure. That took me right back to my childhood.

It was really interesting to see how Darren’s buying movie posters and soundtracks led to him becoming Dags and known as a super-obsessive Batman collector. It’s strange because it feels like Darren regrets his collection but still doesn’t have the heart to give it all up.

Editor’s Note: Freestyle Digital Media provided TBU with a copy of the documentary Batman and Me for review purposes. You can find this film and help support TBU in the process by purchasing this film digitally on Amazon.

This documentary is great to watch for any collector and anyone who wants a trip down memory lane.