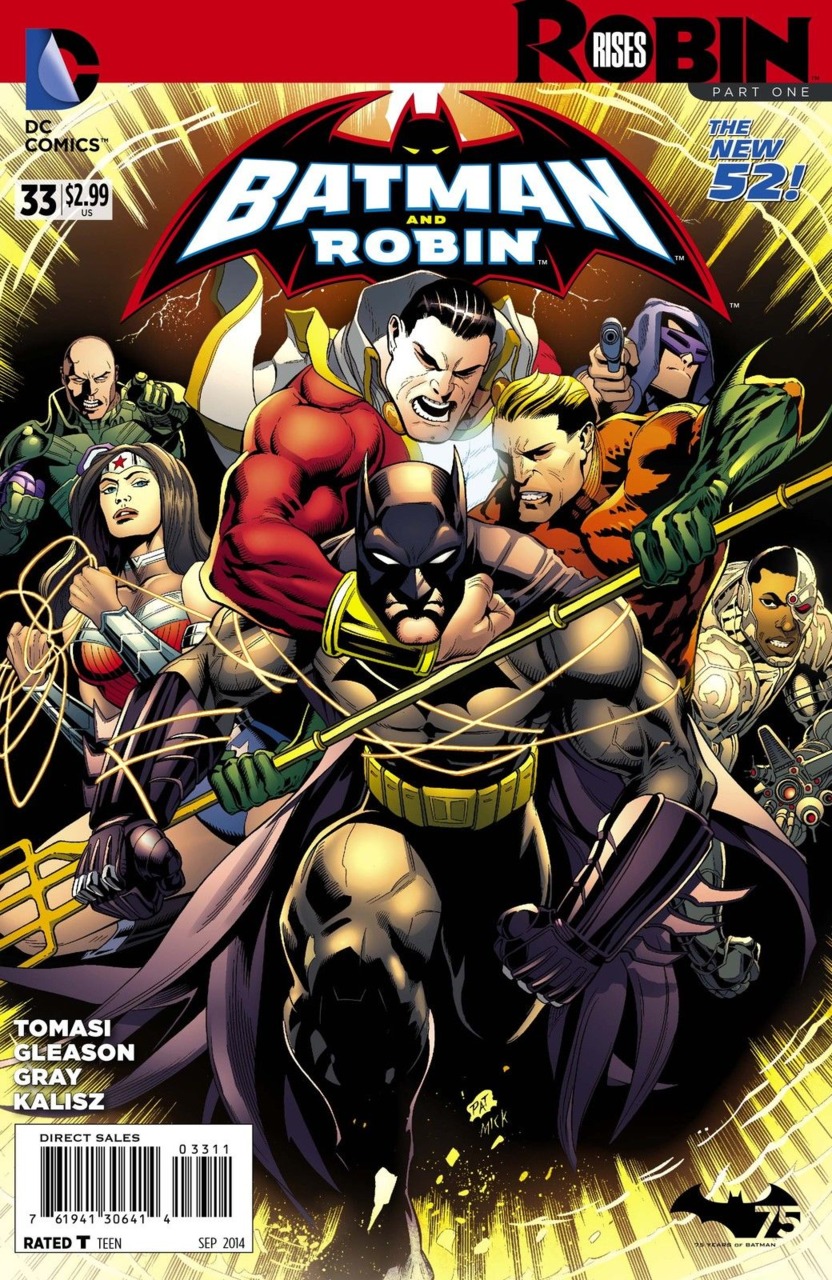 Tomasi is getting his groove back! His storytelling technique from the perspective of a father is perfect for what’s going on in Bruce’s life right now. A year ago, he lost his son. Still going through the grieving process, his son’s body was stolen from it’s grave, and is now on another planet. In Robin Rises: Omega, Batman declared that he will go to Apokolips, and bring Damian back alive. Here, we see Batman’s dealings & his differing relationships with his peers. Some good, some bad. But in the end, he can count on his family being there to help him.

I love how this is showing what a father would give for his son. Batman looses it at times, but not in a way where you question his character. Because you understand that it’s his kid, he’s fighting for. I love that the cover alone, portrays this feeling. Patrick Gleason is on his A-game. His art has never looked better. I feel like he ‘a definitely one of the more underrated artists, and I would understand if he packed up, and left for another book… but I don’t want him to.

We pick up immediately after Robin Rises: Omega, where Batman is daring anyone to tell him he can’t go to Apokolips. This is especially directed to Aquaman. Aquaman says that they shouldn’t leave Earth, as it is their primary concern. Cyborg tries to reason with Batman, when he electrocutes Cyborg, & teleports away.

Luthor seems to be enjoying seeing Batman defy the League. Shazam tries to fly to Headquarters, but is stopped by Wonder Woman, and he is told that the whole team will go. Frankenstein is irritated at the whole thing, and walks off.

Batman appears at Headquarters, and requests access to the Hellbat armor (which was built by the entire League), but is denied by the rest of the League. Arthur still tries to reason with Batman, but Batman asks him what if it was Mera who was taken. A fight ensues, and Batman seems to put up a good fight with them, but he grows tired, and leaves.

We see Godfrey on Apokolips as he gives the Chaos shard, and Damian’s casket to Kalibak (Darkseid’s son), as he states that they will need all the power they can get for the Chaos Cannon.

At Wayne Manor, Bruce tears down the tombstone for Damian’s grave when Superman shows up. He actually gives some comfort to Bruce, and tells him to give him a shout if he needs any help, and flies away. Bruce makes his way to the cave, suits up, and the Bat-family is there to help. Seems as though they may be infiltrating JL Headquarters soon.

Solid issue. Although, it seems as though we are where we started, it did seem necessary, as I’m sure the next few issues will be intense. I’m sure looking back, this issue was needed.