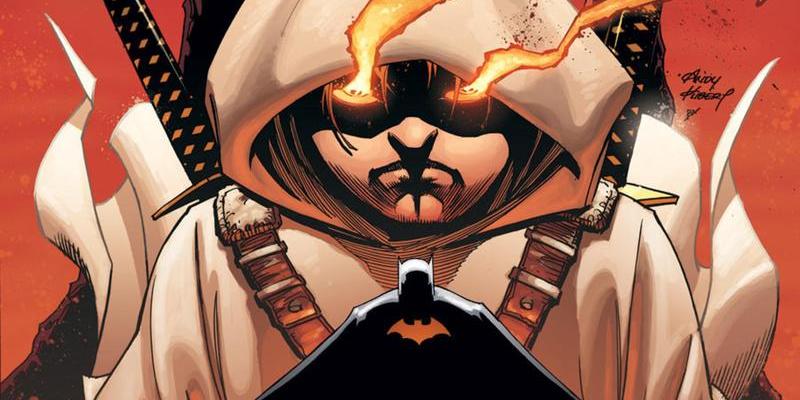 Fans of Batman and the most-famous sidekick in all of comics have been reading the Robin Rises arc in Peter Tomasi’s Batman and Robin with great anticipation as we wait to learn the identity of the soon-to-be-announced new Robin and whether we will ever get to see Damian Wayne alive again.  Recently at New York Comic Con, IGN scored an interview with Tomasi to discuss the arc, the character of Damian and what he loves about Robin.

IGN Comics: Full disclosure: I was never a huge Damian fan, even when he died, and then I read Batman and Robin #18, which was the only 10 I’ve ever given at IGN. It got me thinking about how you’ve written this character’s arc — what was it like handling that particular Robin?

Peter Tomasi: Well, Damian’s always been a favorite of mine. I actually brought Grant [Morrison] on to the Batman books as an editor at DC, so I love the character that he created with Andy Kubert right from the get go, so it was sort go an organic, easy transition to write him. I felt really in tune with him and having a young son myself, it lent itself to be really fertile ground to draw from writing-wise. He’s one of those characters that just sort of — as I’ve seen at the cons, people really hated him at first, and then like you just said, they grew to understand him and see where he was coming from so it was nice to be able to bring people along. As a writer, you never want to feel that somebody’s ambivalent about a character. Loving and hating is good; they’re two opposite extremes. And so to watch people go from a pure hatred mode to a love mode and have, literally, men and women crying at these tables — it meant a lot that I was able to move people and also plug people into the character even more, and that was really great.

IGN: And since Damian’s death we’ve seen another side to Batman. He’s been a father figure before but this is taking it to another level. Can you tell us a little bit about his journey, not just as a hero, but as a father?

Tomasi: It was key, always, to look at that father-son dynamic. In my original pitch proposal, the main story was the relationship; it was never “Get Killer Croc” or “Do this” or “Do that,” it was always how do I get these two people from point A to point Z at the end where they come a full arc and start to chip away and understand each other and coming to respect each other. It was sort of a really nice, easy journey to go on from that beginning to that end point, so it was a good run for us. A lot of people were like “Oh, I can’t believe Batman is so angry, I’ve never seen him at that anger level before” and it’s like — exactly! It’s good to shake things up. You want to see that anger level. If his son was killed, there’s going to be this fury along with this complete sadness and rage and all the five stages of grief that come with it which we explored. It was a good journey that Batman was able to be seen to go through, and Pat [Gleason] drew the hell out of it and was able to get all the emotion I called for in the script right on to the page.

IGN: And it’s been really interesting to watch these different Batman and so and so pairings. It sort of highlights the absence, that it’s a symbiotic relationship. It’s not just that Batman needs a Robin, it’s that you don’t really have Robin without Batman.

Tomasi: It was funny to see because when you look at that book, there was no Robin, but literally for this year and a half, he’s been in the book! He permeates every aspect of that book even without his presence, so with having those characters and bouncing them off in a very specific way due to that loss we were able to put a different light on Batman in many ways and explore that loss even more.

IGN: I know you’re not going to tell me anything spoilery about Robin Rises and I’m not going to push you for it because you’ll be coy.

Tomasi: [Laughs] Yeah, we’ve been down that road before.

IGN: We both know how that tango goes, but broadly speaking, what can readers look forward to thematically or psychologically as Robin Rises proceeds?

Tomasi: I think we can look to a turning of the page. I think we’ve been through this incredibly wrenching, emotional journey — it was tough for me, even as a writer, to have to go through — and even when I wrote the annuals it was sort of a breath of fresh air, those were pure fun issues, no sturm and drang, no heavy emotions, so as we get to the end of Robin Rises in December, it’ll really be a page turn on the future of Batman and Robin and everybody’s going to be in a different headspace.

IGN: Sounds promising. So, we don’t know which Robin you’re introducing us to in the coming months, but just in general, what does Robin mean to you as an icon, as a character, and as a person?

Tomasi: He’s always meant to me a heart. With Batman, that vigilante aspect of him, that Dark Knight aspect of him, having this young boy who in many ways represents himself . . . ultimately, he’s an actor for me, of heart, of humor, of responsibility that being a vigilante is so on the polar opposite of, so that just brings out a whole different aspect of the Bruce Wayne/Batman character that’s the kind I actually like exploring. I love the vigilante aspect and the detective aspect, but to me, it’s more my point of view with that young boy there that they can bounce stuff off of. So, you know, he can be a pain in the ass, he can be a son who needs his father’s affection, a son who doesn’t want his father’s affection — there’s just a lot there so it’s more interesting to write about because it gives Batman that heart and that anchor.

IGN: And I imagine it has more relevance for you as a father yourself.

Tomasi: Oh, without a doubt, yeah. You know, writing this whole thing has been a very trying experience in an emotional way. To have that character out there and to flesh out what a ten year old, eleven year old boy is like has been a lot of fun, so it’ll be interesting to see where people see the story go, if they embrace it or don’t embrace it. It’ll be interesting to see the reactions to it.

IGN: That’s one thing you can always guarantee when there are Robins involved: really passionate reactions.

Tomasi: And that’s a good thing. Like I said, love and hate . . . I’ll take those reactions.

IGN: So, besides Damian, who is your favorite Robin? Any of the Robins from any universe.

Tomasi: Dick Grayson. After Damian, it would be Dick Grayson. I wrote Nightwing for a little while and I always enjoyed Dick Grayson’s levity and the lack of, you know, intensity that he brought to the page, that he brought to Batman. There’s that lightness to him that I liked, and thinking of him as a trapeze artist and a circus performer, that lightness is, in a weird way, defines him even in his physicality of being light and being able to fly through the air. Starting to tie these little themes together for him, the core of his being is a performer in the air, and that lightness, for me, has always translated to Batman with trying to make their relationship that much different. He was just a fun character to write.

IGN: And fun to read, too. So, do you have any final thoughts for readers, both old and new, coming into Robin Rises?

Tomasi: Nope! Well, just to say that when they pick up the book, if they’re in the mix with us right now, they’re in for the long haul, and for any new readers who are thinking about joining and coming on board, Robin Rises: Omega was the perfect jumping on point. You know, we opened the issue with seven pages of really getting everyone up to speed in a short hand, succinct way, so I think if they haven’t picked it up yet, they can definitely just jump on board Robin Rises: Omega and follow us right through to the end in December and hopefully join us for the rest of the ride.