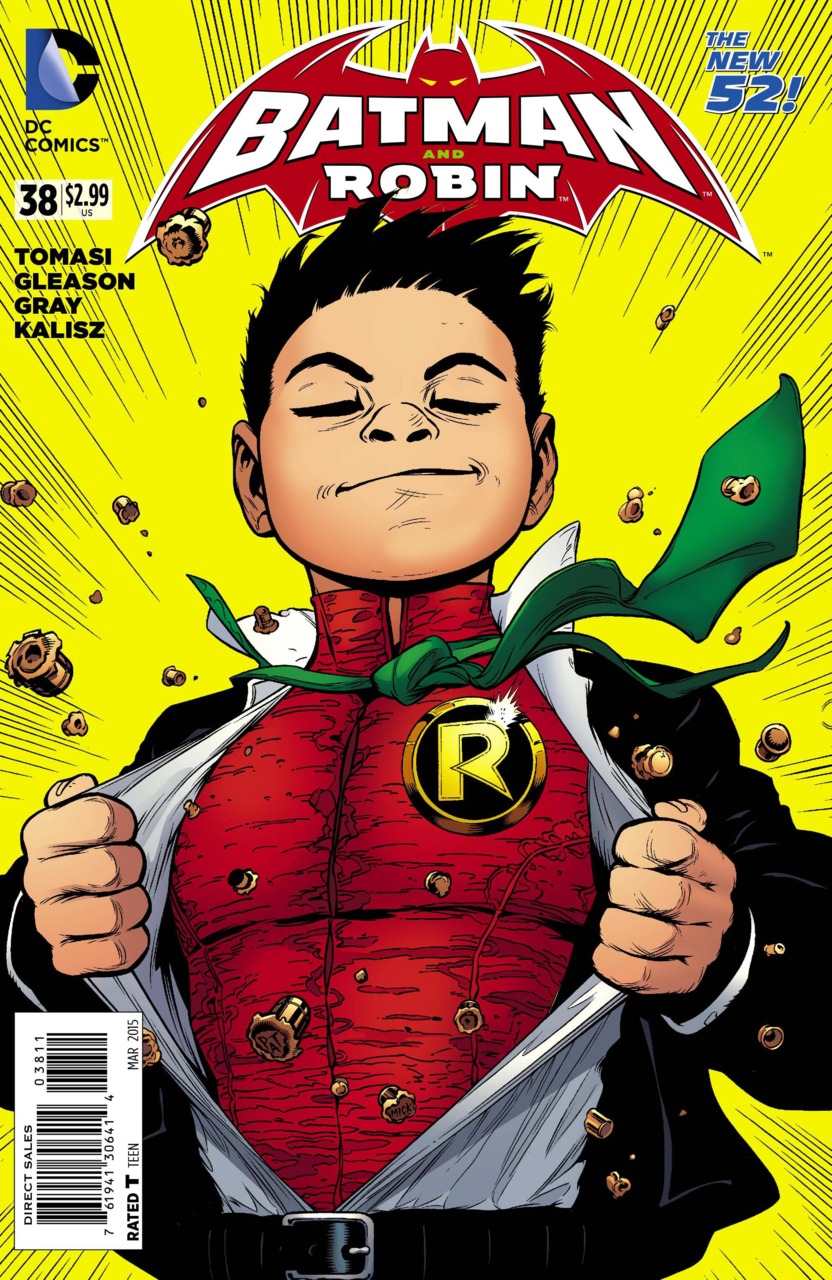 The issue opens with Robin perched on the headboard of a sleeping Bruce Wayne. Damian reaches down, opens up Bruce’s eye and asks if he is awake. With a grumbled reply, Robin springs into action and the dynamic duo take to the streets on patrol. Over in the Financial District, Batman and Robin end up coming across a set of robbers with bags of cash. Batman quickly dispatches most of the men, but one of them ends up opening fire on Robin. However, the bullets simply bounce off Robin’s chest as he proclaims “I got this.”

Robin walks slowly towards the gunman, crushes the rifles in his hands and then slams him across two cars. Batman tells him “enough” and tells him to get in the car. Robin insists on flying back to the cave, but Batman catches his cape and sends him to the batmobile. On the drive back, Batman discusses with Damian on his excessive use of force during the confrontation and Damian states he was only trying to strike fear into the criminals.

Back at the Manor, Damian has a strange dream with images of his mother Talia, Ra’s and the Heretic. He eventually sees the head of the Heretic telling him that his brothers are crying out for him, and Damian is so distraught by the images he wakes screaming and bursting through the ceiling of his bedroom. In the room above, Alfred asks if he has been having trouble sleeping. Damian responds with a derisive “yes” and states he is going out for fresh air.

Out on the grounds, Damian has donned his Robin outfit and begins inscribing his mother’s name into Talia’s grave marker…with his finger. Alfred, who is watching from a window, communicates with Batman who has gone back out on patrol. Damian suddenly flies off into the sky and Batman insists that he can track Damian via a GPS dye that he put in his morning juice. However Alfred insists on giving Damian some space.

Damian eventually flies off and lands on the island where he and his “brothers” were created. Batman and Alfred meanwhile discuss the situation and Batman states that giving him space was needed, but he wishes he could be by his side to help him. Singlehanded, Damian ends up demolishing the old laboratory and its equipment and then dives out through an opening in the wall.

Speeding out into open water and diving down, he eventually reaches Atlantis and meets with Aquaman. They discuss how, following Aquaman and Batman’s team up near the beginning of “The Hunt For Robin,” Aquaman took possession of the remaining Damian clones in order to humanely take care of them. Aquaman grants Damian the mutated clones and he takes them to the surface and brings them back to the island. Damian ends up releasing the clones on the island, he tells them it belongs to them and that they are free…just like him. The issue closes with Damian donning his Robin mask once again and flying away from the island.

So I guess it is confirmed that more of Damian’s powers have manifested. To date we have seen, invulnerability, super strength, super speed and flight. However, unlike the Man of Steel, Damian is still coming to grips with these new abilities and has no control over his emotions when using them. Batman ends up having to ground Damian back at the cave because he seriously injures a bad guy.

My only concern with this issue is that it seemed mediocre at best. However, coming off the awesome return of “Robin Rises: Alpha” could we have expected any less? For the past several issues “Batman and Robin” has been wrought with heavy emotion, massive battles and dramatic turns…so how does one follow up to that? What we end up getting is a very mellow story where we see Batman do exactly what we all predicted in a response to his son having super powers – “go sit in the corner until you’ve learned to play nicely.”

I did like to see that Damian has not lost his humanity, and it took him so long to even get close enough to something that doesn’t resemble a homicidal assassin child. I liked that Damian felt he needed to take care of his “brothers” and that he ends up destroying his “birthplace” all due to a strange dream.

Overall this was an okay issue, but I am looking forward to see how a Superman-like Damian will continue to fight against the forces of evil. Last note, I really liked the cover to this issue…a classic Superman pose with Damian pulling back his Clark Kent shirt and tie to reveal the Robin costume underneath, complete with a hail of bullets bouncing off his chest. All it needed was a classic “<tt>” to complete the image.