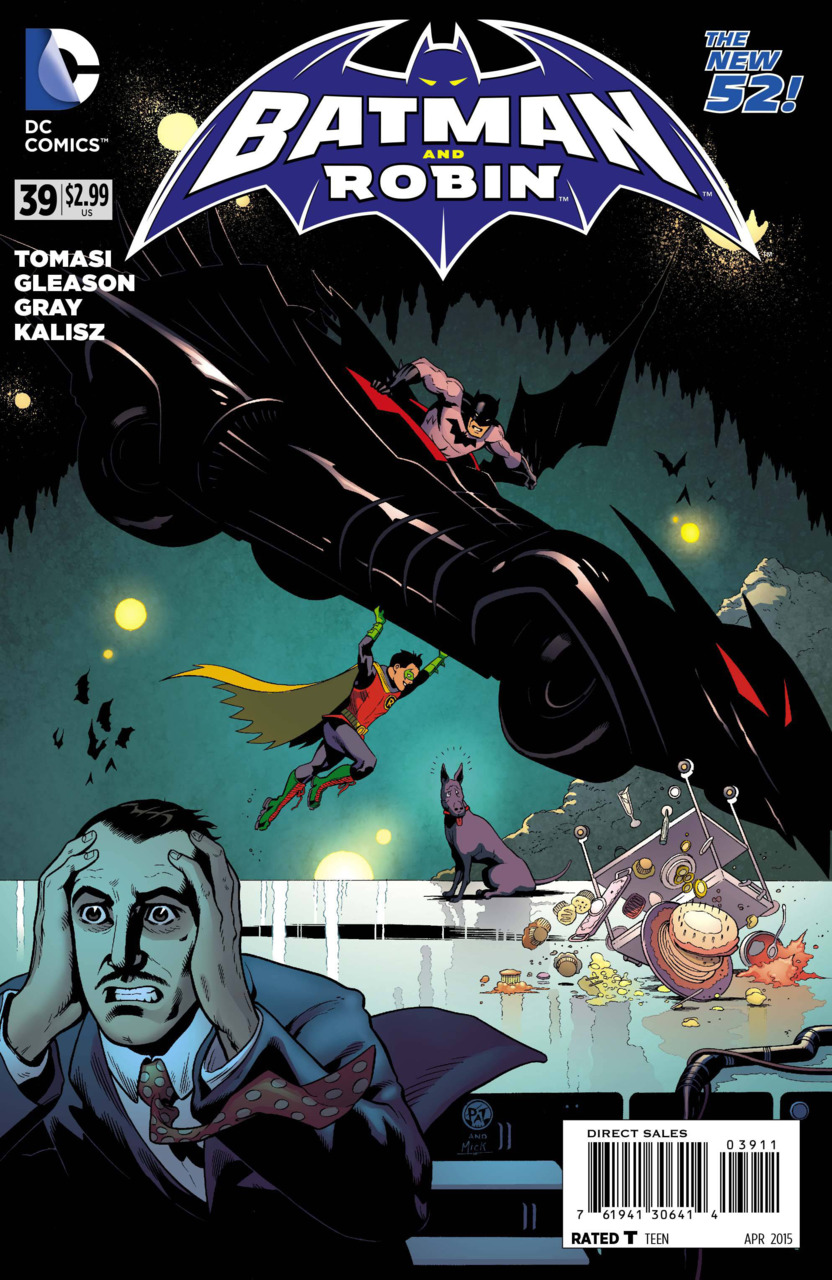 Our issue opens this week with several panels of Gotham villains being apprehended by a streak of green/red/yellow. The villains suddenly find themselves in a dark room as the light bulb overhead is smashed out. Speaking from the darkness, the villain’s captor (Damian) ignites a flare and taunts his opponents. Killer Croc grabs the Boy Wonder and mocks that since he is alone, no one will be witness when the group beats him to death. Penguin attempts to warn Croc that harming Robin would bring the wrath of Batman down on them, but Damian surprises everyone by bashing Croc in the face and speeding around them and tying them all up. Robin then flies out through the skylight, trailing his captured foes behind him. As Damian brings the villains into the upper atmosphere, he warns them that things are changing…but before he can finish his threat, the Batwing flies by and snatches the rope from his hand. Batman appears and tells Robin to return with him.

The next day, Damian and Bruce are out fishing as they talk about Damian’s recent actions regarding his super powers. Damian wonders how he even got powers in the first place, and asks his father if he has a theory. Bruce hypothesizes that the Chaos Sliver energy was absorbed by Damian over the years that it was used by his mother and only activated upon Bruce stabbing it through Damian’s chest…this coupled with the Sliver’s infusion of Omega energy from Darkseid completed some form of circuit that gave Damian his abilities. Bruce also speculates that when he made contact with the Sliver that it gave him a vision of what he had to do to bring back his son.

Later on, Bruce is busy running Damian through several tests and talks to Alfred regarding their results. It seems that Damian is experiencing pain due to his powers…but the information isn’t making it to his brain in order to process. As the testing continues, we cut to several nights later where Batman and Robin are out on patrol and they are in mid battle against a group of bad guys who have stolen a tank. Robin eventually becomes aggravated because he can end the fight quickly and eventually flies out to do so. After ripping the tank open, Batman and Robin quickly dispose of the thieves.

With their bad guys captured, Batman attempts to reason with Robin that it isn’t natural for him to have powers…or to not feel any pain. He is suddenly called away when his communicator activates and summons him to the Watchtower. As he teleports away, Batman instructs Robin to turn in the thieves and drive the Batmobile back to the cave. After dropping the men atop GCPD headquarters, Damian grabs up the Batsignal and starts to search for other wrong doers in the nearby alleyways…only to find Batman himself.

With the signal returned, Batman brings Damian up to the League satellite and are greeted by Superman who attempts to tell Damian he is glad to see him. As Superman and Batman discuss the situation, Shazam and Robin talk about the events that lead to his resurrection…as well as Shazam’s collection of video games on the Watchtower. The conversation eventually turns to why Batman was summoned – it appears that a creature was discovered living on an island near Nagasaki in Japan. With reports of several attacks, Superman and the rest agree to stop the creature…but with some help, Robin will be joining them in the attack.

Another interesting issue of “Batman & Robin” where we get yet another homage to a classic Superman image on the front cover. This time, we have Damian holding the batmobile above his head as was first seen on the cover of “Action Comics” #1 when Superman was lifting a car. It’s interesting that the covers continue to relate back to the Man of Steel with Damian taking his place. Not sure if this is some type of foreshadowing…or if we are simply meant to associate Damian having similar powers to Superman.

Throughout the book we continue to get an aggravated Damian who is being kept on a leash when it concerns his powers. Batman continually tests his son and comes to the conclusion that he isn’t as invulnerable as we were meant to believe…Damian’s body is sensing the pain he is enduring, but the information isn’t being relayed to his brain. I’m wondering if this will somehow cause his powers to end up hurting the Boy Wonder in the future. Or maybe it could burn itself out and leave Damian powerless?

I am quite interested to see what happens next month as Damian joins up with Batman, Superman and Shazam to defeat a monster…could these events be why Damian hasn’t appeared in the “Batman Eternal” event? (For my theory on this, see my most recent review of “Batman Eternal” #46)

Overall this was a decent issue and I am looking forward to seeing what happens with Robin joining up with the Justice League next month.