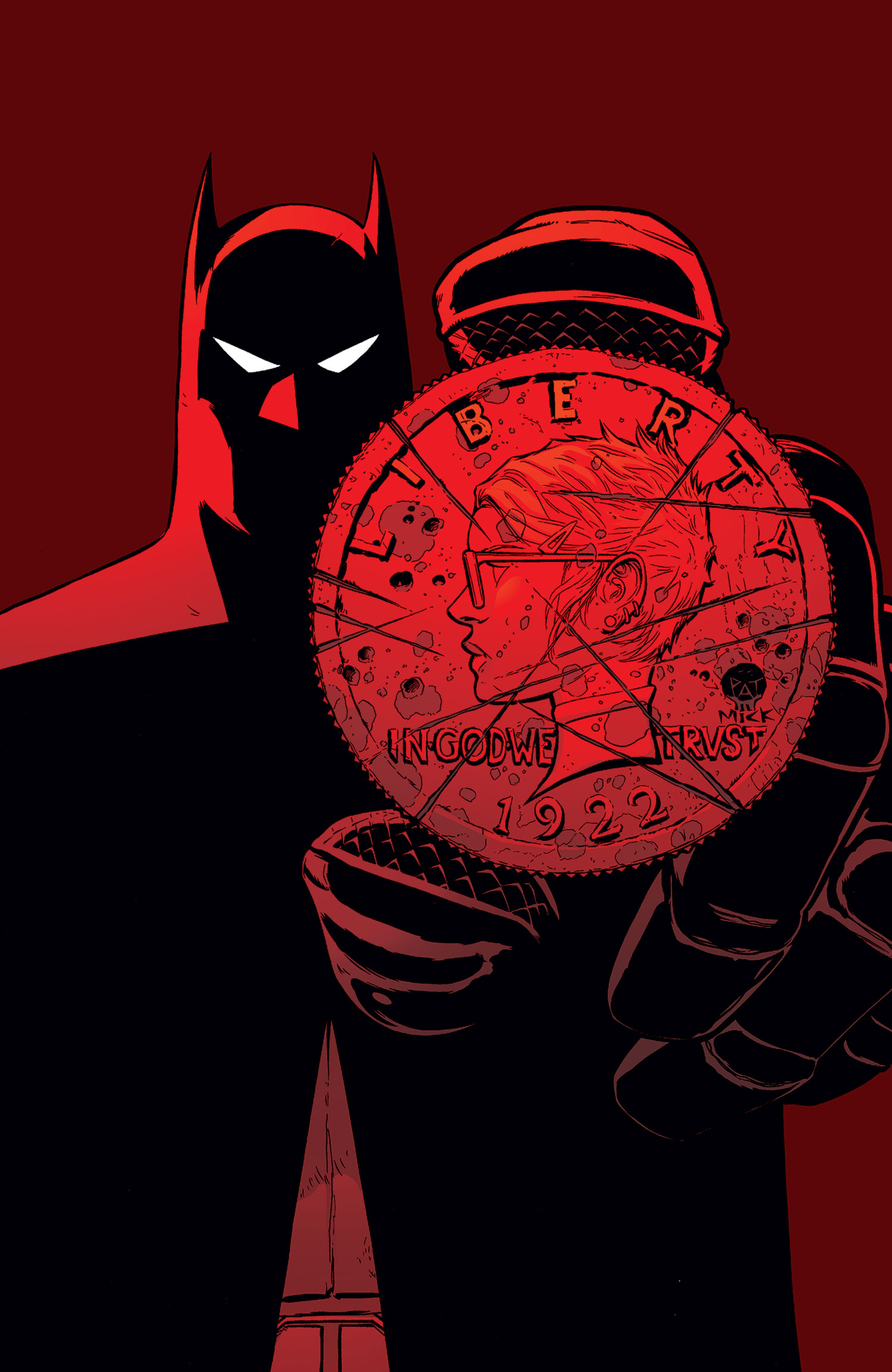 Is it just me, or does the Two-Face coin on the cover look like "Two-Face as played by Matt Smith"? And with that realization, who would actually like to see Matt Smith play Two-Face?

The issue starts off with an acid attack, by Two-Face, on the Gotham PD. Gordon and his men rush up to the Bat-Signal, half of which has been melted away. Batman confronts Two-Face and tries to appeal to his better half, but Two-Face escapes by threatening some hostages he had taken for this exact eventuallity. Batman saves them, but not without taking time to pose in front of an American flag.

In the past, Erin escapes from police custody with the help of her cousin, who looks like a young, mustache-less Jim Gordon. She goes after Harvey Dent, murders Gilda, and then knocks out Harvey. Back in the present she asks for help from Bruce, because in the past he had asked for help from Erin's father, after his parents were murdered.

Erin is attacked in prison, but a last minute intervention by Matches Malone allows her to escape, though ultimately Matches sedates her and takes her to a bat boat piloted by Alfred. Erin wakes up in Wayne Manor, to find Bruce wearing a shirt that looks suspiciously like one of his Batman outfits, but without the logo.

I enjoyed this issue quite a bit more than I did last month's. Mostly I would have to say this is because I've had a whole month to reconcile the non-canon status of Long Halloween, so I can take this new direction for what it is. Mostly what I'm hoping for is that we will get an exploration of Gotham's pre-super villain period, back when the mobs were in charge. I've always been fascinated by that time period in Gotham's history, and while I've enjoyed the past established pre-New 52, I think there is something interesting in our future here. And after all, who doesn't like them some Irish mobsters?

The opening pages were fantastic, Two-Face's use of acid the GCPD worked not only thematically, but practically (by comic book standards of course) and the imagery of the Bat-Signal half melted really sets a strong tone for this issue. What's not so great is the over the top pose that Batman takes when leaping to save Two-Face's hostages. It isn't like this is the first time we've seen this kind of imagery, but it seems out of place considering there isn't any reason for the comic to be going all "USA #1" on us. Unless it was meant as a Veteran's Day homage? Which makes no sense because Veteran's Day is less about the country and more about the people that served the people. Either way, it's an over the top and silly panel that draws me out of the story.

The chase scene in the flashback, while a bit too "Terminator Batman" for my tastes still works in an over the top kind of way. Though I can hear all the non-armored versions of Batman wincing when he takes the slug in the chest. I know any smart person would wear body armor doing what Batman does, but with how good his armor has become we're losing an important aspect of the character. Namely, that no matterhow skilled he was, he was still as vulnerable to weapons as any normal human. That humanizing aspect is what set him apart from characters with powers. As Batman is now, all covered in what seems like invincible armor, what's the difference between him and someone that just has the power of being invincible to guns? And would the Batman we know really charge in and let his armor take those bullets, knowing that all it would take is someone smart enough to shoot him in the mouth to take him out? It's a minor point, but still a problematic trend that has been bugging me for a while.

I find the idea that Bruce went to a mobster for help odd. Granted he was younger, and with age comes wisdom and all that, but it seems hard to fathom that he would go to a mobster for help tracking down his parent's killer, when one of the defining aspects of the character is his hatred of the crime that took his parents in the first place.

Not sure why he takes Erin to Wayne Manor. I know the idea is they had a past together, or something like that, but it always rubs me the wrong way to see a brand new character being treated differently than an established character. It feels like the author is saying "Look at what a special snow flake my completely original character is!" This may be a bit harsh, but with all the focus on brand new characters I can't help but think this is the basic mindset around the DC offices nowadays.

Despite my complaints about most of the book, I did enjoy it for the most part. The opening was great, and the action scenes were great, if a bit "not my Batman". Overall a solid effort.