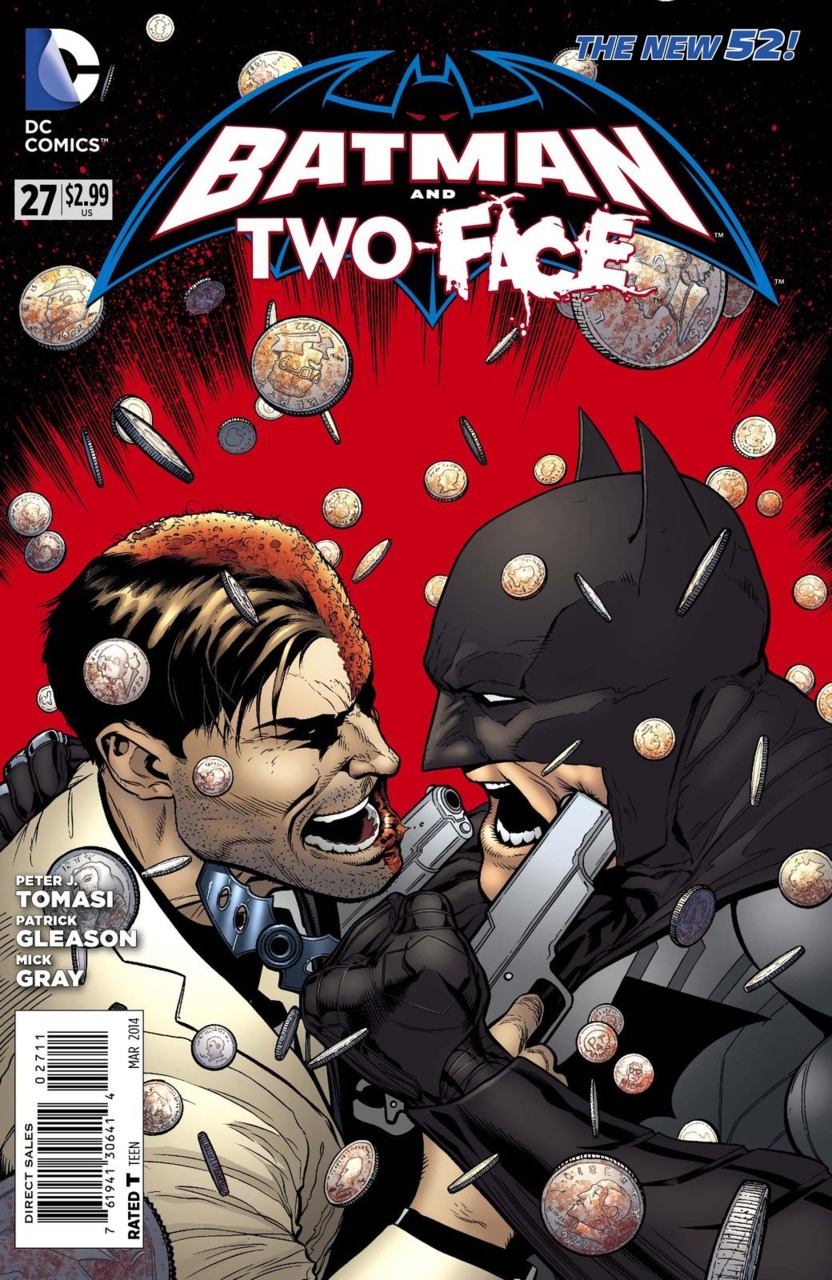 With Batman incapacitated, Two-Face tries to burn Erin's face off with the same acid that she used on him. Before he is able to an ambush by the other crime families catch our three characters off guard. They attempt to murder Erin, Two-Face, and Batman but the three escape; only for Two-Face to eventually be captured, leading Batman and Erin to go after him. They discover that the Mobs will be making an example of Two-Face as a statement to the other super criminals in Gotham.

The main meat of this issue is in the reveal of how exactly Harvey became a traitor to the McKillen sisters. In what I don't think has been covered in great depth we get to see that Harvey was a defense attorney for the McKillens, and in fact was responsible for a great number of criminals escaping convictions. But after a failed assassination attempt on Gordon and his family, Harvey tries to get out of his situation. With the help of Bruce Wayne and some other backers he makes a bid for the position as DA, becoming the good guy we knew him for before his injury.

So essentially Harvey Dent is now Emilio Estevez's character from the Mighty Ducks.

While we don't see exactly how he puts them behind bars, we leave the flashback with the understanding that he will be working to put them away. Ignoring the changes to the character's origins and how this story pushes Long Halloween out of continuity, I like the way the story has been told. The flashbacks we get each issue work backwards towards the reveal of how everything happened. It raises questions by giving us the answers but not the questions themselves. The past three issues we've gone further back each time, which suggests that we won't be getting to see the trial that put Erin and Shannon away, since it would be going forward instead of back from where this flashback left off. And I don't think we really need it, since the important elements of the backstory have been revealed anything else would be superfluous and hinder rather than help the flow of the overall narrative.

While I still don't care for Erin as a character, and think that in the long run she will be forgotten along with all those other characters you can't remember from past Batman books. However, I did enjoy the interaction between Batman and Two-Face. The best Two-Face stories I feel are always the ones that emphasize their past relationship as friends and allies. This is why his story in Batman: The Animated Series was so compelling, and why it worked in the previously mentioned Long Halloween. Recent Two-Face stories haven't focused on that as much, prefering to use him as just another criminal. So to see a story that gets back to the roots of the relationship is a lot of fun. And the moments with them are well written and in character which is always a plus.

The scene at the end, in the bar, reminds me of the similar scene in Long Halloween, which ends with Batman beating up the bar tender. Good to see this guy has more smarts in his head than his spiritual predecessor. Is this an homage? Probably not, but if it is I got a bit of a kick out of it.

Overall I have to say I liked this issue. I'm still not entirely on board with Erin, but I think the storytelling this time around was superior to past issues of this story.