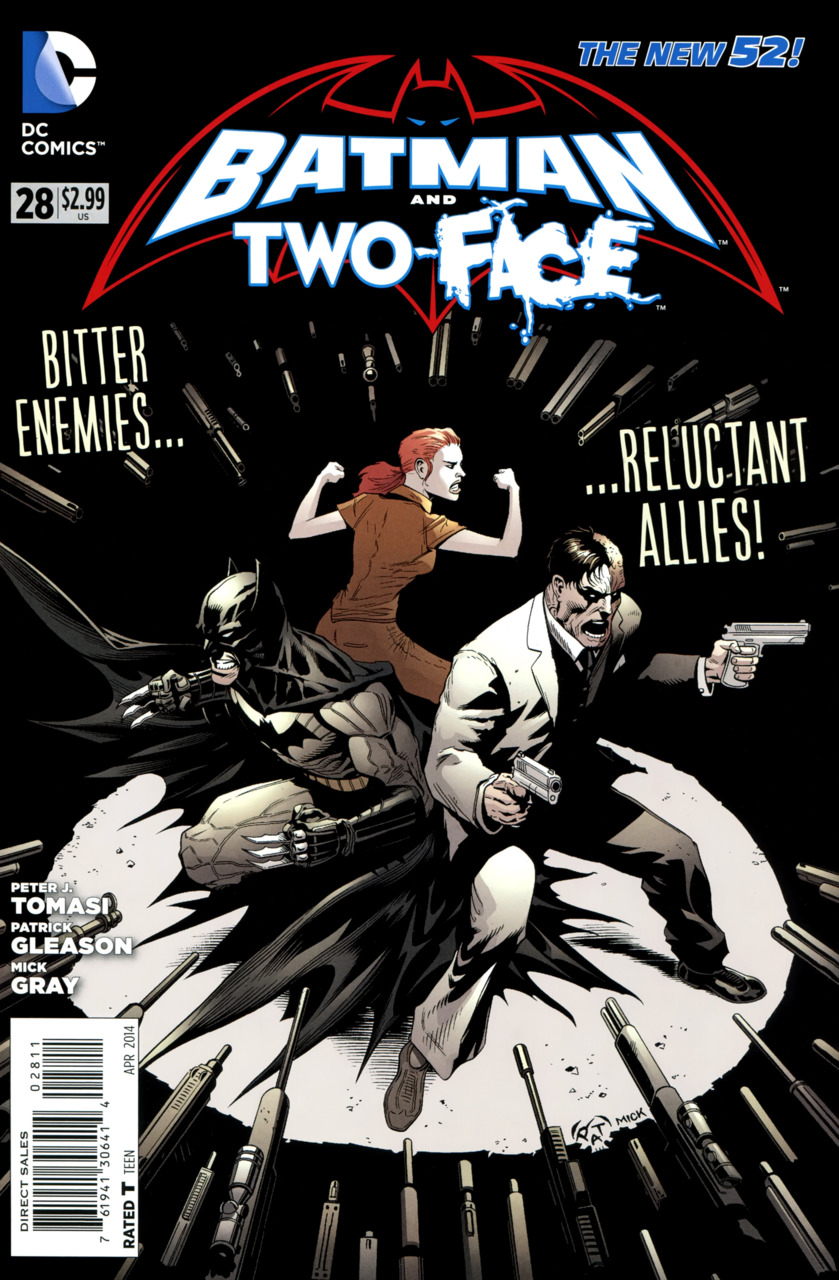 I've been on the fence regarding this story from time to time. I enjoy what's being done with Two-Face, but the introduction of a brand new character to make the story work rubs me wrong. In general I hate it when writers introduce brand new characters rather than relying on the established ones. On the one hand never using new characters can lead to the Batman Universe stagnating, but in my opinion this universe has been established for so long that any new character feels like an unwelcome addition. Especially when they feature so prominently in a story. It's not impossible, but getting past the bias is something comics writers will always have to deal with.

To make Erin's creation seem all the more pointless, she doesn't even play a major role in the finale of this story. Early on, three pages in to be exact, she's ejected from the story, no longer playing a major role in what always should have been a Batman and Two-Face centric story. She only appears in the background in a flashback, and in a single page at the end promising her eventual return. A promise that I hope is kept as well as the promise of a Super Mario Brothers Movie sequel.

Ignoring the now defunct new character, lest my critique of the issue turn into a a fanboyish creed, let us instead focus on what actually matters, the finale of the first major Two-Face story of the New 52. And for what it's worth, this climax makes the entire story. I've enjoyed the story overall, with some concerns thrown in here and there, but seeing how the story plays out, and how well it handles Harvey Dent, I'd say it was worth the ride. The reveal that, spoilers, Harvey knew who Batman was all along is a heavy bombshell, and retroactively works wonders with Harvey's personalization. What it means that in all past stories, even those where he was portrayed as entirely evil, he knew who Batman was. And for whatever reason he never revealed who he was or ever used it to his advantage. So much can be read into this reveal and it works to validate even the less than stellar Two-Face stories, as it shows that even then he always had that little bit of gray area left in him.

The dialogue is well handled, as it marries the art in a way that allows the characters to have their philosophical debates while still keeping the pacing flowing smoothly. And that philosophy, of the edge being the third side, comes together perfectly right at the end. It has meaning to the story, rather than just being pretty words that ultimately are only that. Seeing Two-Face confronted by that third option is handled beautifully as he shows just how broken he is. So many times his compulsion to use the coin to make his decisions is played as just another gimmic, that ultimately he would end chosing to do evil. Seeing him legitimately conflicted, with nothing to guide his broken moral compass, this story is one of the first that I've read in a long time that legitimately deals with Two-Face for exactly who he is. He's a criminal mastermind yes, but out of Batman's many villains he is the poster child for the psychologically broken mind and it's about time he is treated as such. Some may see the scene as a sign that there is still good in Harvey, but I take it rather that there is not necessarily good or evil in him, he is nothing but a broken man for whom good and evil have long since lost all meaning.

The big question is now, is this the last Two-Face story? If it is it was a great way for him to go out. But if this is true then I worry about the fate of other classic villains, are we seeing the wholesale replacement of the villains we love? Probably not but that doesn't meant I can't stir up a little fear over the prospect.