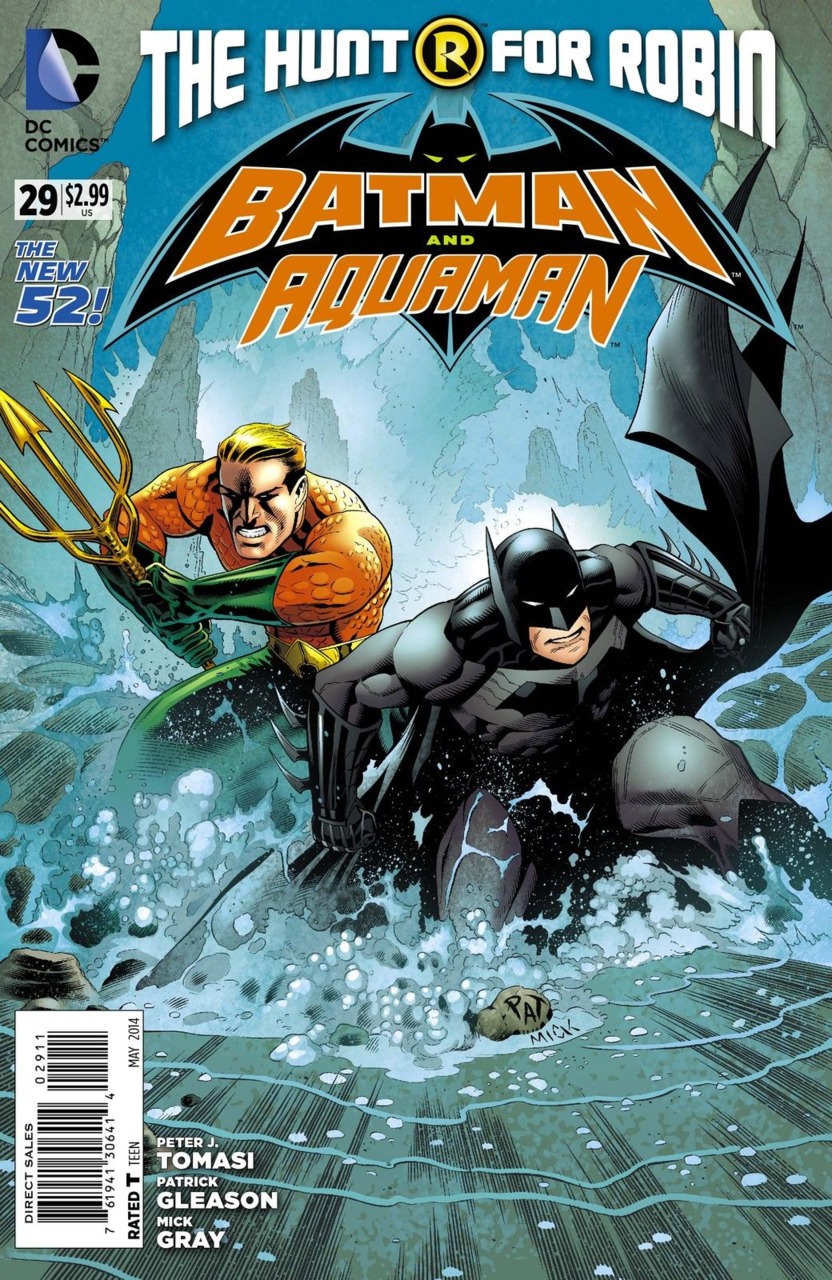 Everyone's favorite hard to title series is back! This time pairing Batman with the only other superhero that has received as much ridicule in pop culture as Robin, Aquaman!

Fortunately this isn't Seth Green's Aquaman (actually maybe just ignore everything he ever has to say about superheroes, that might be a safe bet), and it isn't even your overcompensating Geoff Johns' Aquaman. This issue what we get is a consumate professional, the kind of hero that Batman can properly respect and work with. After reading this month's issue I wouldn't be surprised if Batman and Aquaman are better friends than Batman and Superman are, the two certainly have the same grim demeanor and while they wouldn't be much fun for others to hang around, they certainly would enjoy each other's company more than that of any other member of the Justice League.

The story itself pits the two together in such an organic way that I immediately forget how odd the pairing is in the first place. The two may have their similarities here and there, but their jurisdictions so rarely overlap that the entire idea of having them team up reads more like one of the goofier issues of "Brave and the Bold". Actually, is it just me or does it feel like "Batman & " is the new "Brave and the Bold"?

Odd though the teamup may be, Batman and Aquaman work together very nicely, and Aquaman's quest to discover the fate of a large number of whales is the perfect way to bring him into the story. The perfect crossover gives a perfect reason for why the characters are together, and while this story isn't perfect, it's certainly one of my favorite renditions of the crossover-fest that "Batman and Robin" has become. I don't have a list but it is right up there in the top three at least with "Batman and Catwoman".

After several months of what felt like Batman moping over the death of Damian, and I know the word choice is hard, but so much of this series, early on at least, has been Batman throwing tantrums, but finally we move the plot forward as we discover that Ra's al Ghul is planning to bring back Damian and Talia. Though this Ra's seems a bit less of the ingenious mastermind that he normally is, after he not only reveals to Batman where he is going, but also reveals that it happens to be the home of one of the Justice League's most powerful members. Which seems odd considering he was worried that the presence of Batman and Aquaman would bring on more League members. Me thinks that risk is greatly increased when taking his dark plans to the home of Wonder Woman, who just so happens to currently be cuddling up to Superman. And I don't think anyone needs a reminder of what happens when someone directly or inadvertently threatens someone he loves. Even if that love is currently being dictated by the higher ups at DC and will probably end up going nowhere within the next couple years.

The story itself is an odd one, in that we aren't sure how Batman discovered Ra's's location, nor do we dwell much on Aquaman's presence. Which I find the safest bet since his presence is incidental to the story, while at the same time being the best way the two could possibly cross over.

The art is particularly gruesome this time around, with disembowelled whales, sunken corpses, and mutated monstrosities. And for anyone reading the physical issue instead of the digital, the ad placement becomes problematic as at one point I could have sworn that suddenly Superman had become a part of this crossover issue.

Besides Ra's performing at less than his best towards the end of the issue, I could not find much of anything I did not like this time around. There were minor concerns here and there, such as when I thought that Aquaman had a whale kill all the Damian clones, but all of them were addressed by the end of the issue. This is just a solid Batman story that happens to feature Aquaman in the most organic cameo.