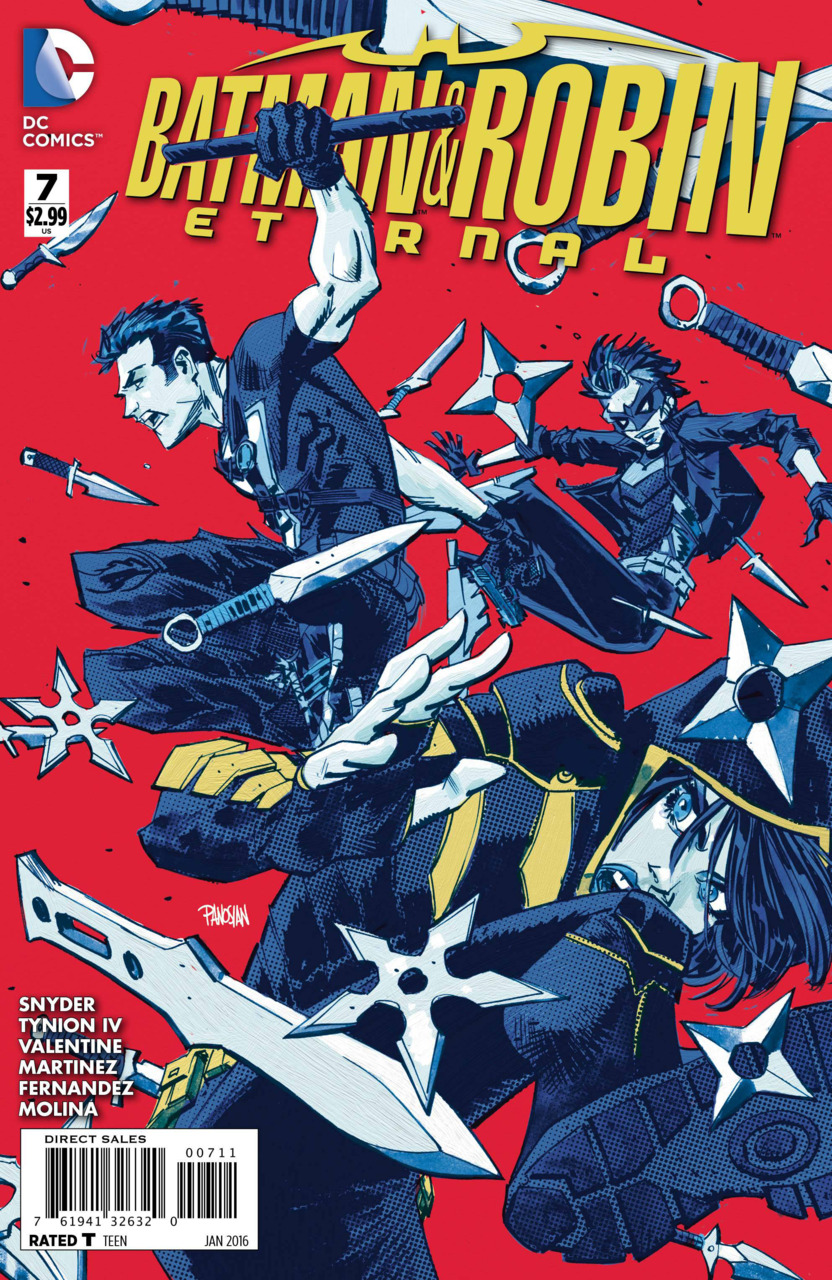 The Robins spread out across the globe and come face to face with Mother and her agents.

In Prague several years ago, Batman and Robin (Dick Grayson) chase down a man working for the Scarecrow (Dr. Crane).  Crane has taken to dosing his employees with fear toxin, rendering them unable to give any information about his plans. Bruce has setup a Prague Batcave, which turns out to be very useful in the present, as Dick, Harper Row, and Cassandra Cain use it to track the Orphan.

Using the list Cassandra provided in issue #1, Dick knows that the prima ballerina of the Prague Ballet is one of the last living names who are part of Mother’s plans. He sends Cassandra and Harper to the ballet to watch and possibly contact her, while he attempts to trace Harper’s tracking device on Orphan’s boot.

Meanwhile, Jason Todd (Red Hood) and Tim Drake (Red Robin) take one of Tim’s Robin planes to Gamorra, apparently a Pacific island nation, where Jason attempts to get Tim to open up about his break with Dick. Tim has traced the same signal that precipitated the attack on Bruce Wayne in Gotham to the island, and the two former Robins proceed to put pressure on black market operators for information.

In the past, Bruce meets with a man named Hamilton, who tells him that you can’t buy a meeting with Mother, but that Bruce can “prove” that he is worthy of meeting Mother by going to the ballet.

Dick remains in contact via ear comms as he travels the city on the rooftops while Harper and Cassandra watch the ballet. Backstage, the manager of the ballet talks to the ballerina, expressing affection, but she receives a call from Mother to activate the ballerina. As Harper realizes that Cassandra understands the ballet because of her ability to understand physical communication, Cassandra notices that the ballerina is one of Mother’s agents. Dick and Harper’s comms are jammed just as the entire ballet company jumps off the stage to attack the two girls, and Dick, who has followed a decoy signal to the backstage of the ballet, stumbles directly onto Mother, who greets him saying, “So nice to see you again.”

Genevieve Valentine, fresh from completing her year on Catwoman, takes over the writing duties this week, and despite a few minor missteps, provides one of the very best issues yet of the series. Picking up from James Tynion IV’s excellent issue last week, she plunges our heroes into international intrigue, touching on Tim and Jason’s investigation in Gamorra while focusing on Dick, Harper, and Cass exploring Prague. Valentine’s sense of the characters is strong, and her dialogue rich and layered – Harper and Dick make Star Wars references, the manager of the ballet foreshadows her beloved pupil’s condition by speaking about Sleeping Beauty, and Cassandra’s ability to understand body language is beautifully and elegantly communicated by a two-page splash of her taking in the ballet next to Harper.

That splash also highlight the brilliance of Alvaro Martinez’s pencils. The layout of the pages is very reminiscent of J. H. Williams III’s justly acclaimed structuring of Batwoman or Sandman Overture – not traditional panels, but clear storytelling in a beautifully balanced and inventive way. The whole scene is structured as a chiastic structire – a poetic literary device with the ordering of parts ABCCBA. Cassandra watching, Harper tapping her finger, then Cassandra holding Harper’s hand for silence and Harper watching Cassandra plays out in mirror across the two pages.

Hopefully Martinez will have had enough time to complete the pencils for this book and next week’s issue, and we won’t see another instance of fill-in pencillers piecemeal finishing the issue, as Martinez’s crisp linework, appealing sense of the character’s designs, and brilliant layout skills provide one of the most polished and attractive experience the Eternal series has had to this point.

Though the complete absence of Stephanie Brown, the lack of reference to Harper’s severe injuries, and the confusion of Orphan’s severed hand for a foot provide a few missteps in the writing, on the whole, this is a truly excellent issue of the series, driving things forward with emotional intensity.

What happened to Francis Manapul’s covers? We got the Tim vs Dick one last week, but we’re getting a different, much less known artist this week? Though it’s a pretty cool cover.

This week’s back matter is an interview with Scott Snyder, Tynion, and Tony Daniel, and highlights the series’ purpose in answering the question of why Robin is so important in the Batman mythos and Cassandra Cain’s return.

With stellar writing and art this week, the international direction of the narrative provides intensity in both character development and mystery.