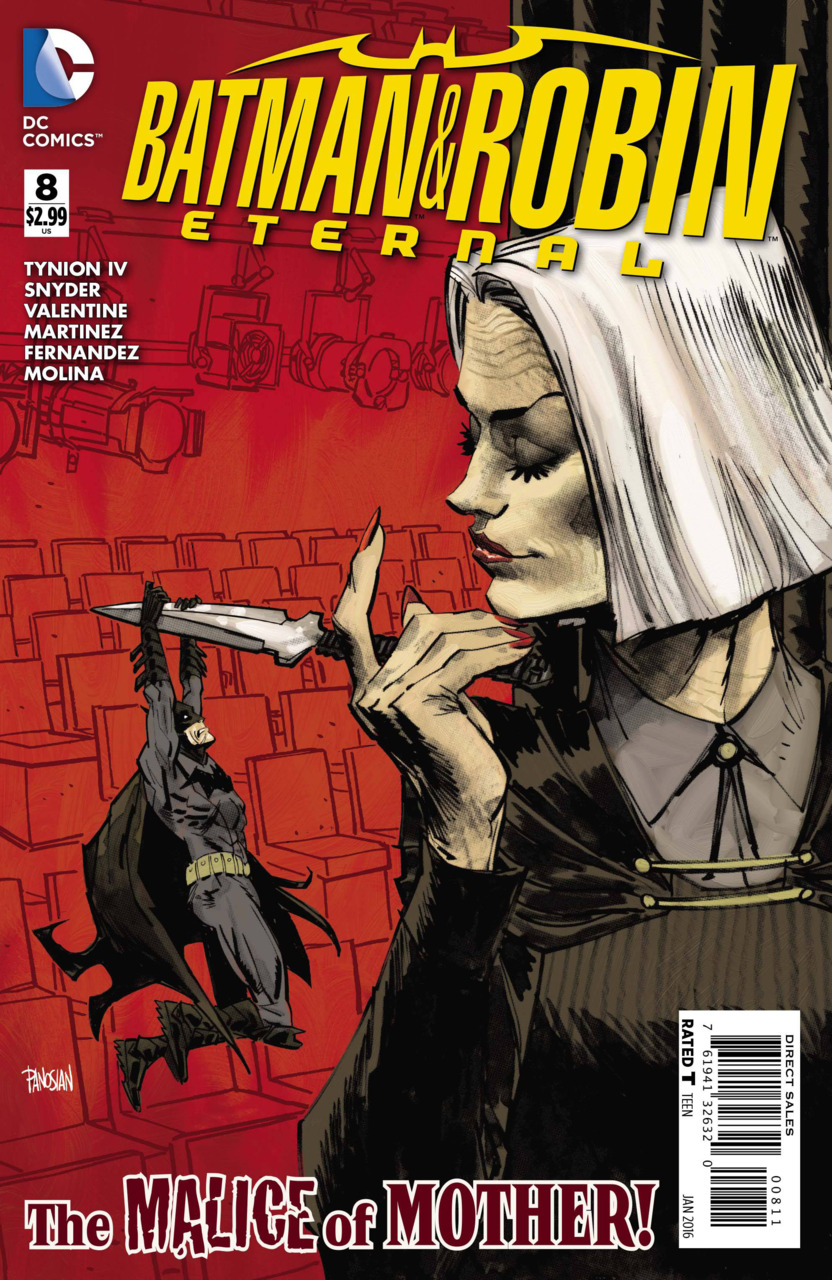 In the past, Bruce leaves Dick at the ballet to find Mother, just as Dick in the present runs right into Mother’s trap in the same location. Harper and Cass fight the entire ballet company, but Mother blocks Dick’s ability to help them. Offering him the chance to live up to Batman’s expectations by coming with her, she taunts him with the possibility that one of Batman’s Robins was her creation.

When Bruce met with Mother, he pretended to be on the lookout for a wife, just like Maxwell from issue #6. Mother seems like she is willing to go along with it as Bruce plants a tracker on her coat.

Cassandra and Harper finally reach the prima ballerina, Mother’s primary agent, but just as Cass takes her down, the manager of the ballet, who loves the ballerina, knocks Cass out and persuades the ballerina that she has fulfilled Mother’s instructions and can leave. Harper and Cass must still face the other dancers.

Dick rejects Mother’s offer, and she says he’ll never see her face again. Even though she tells him that by saving his friends, he will lose everything, Dick dashes to Harper and Cass’s rescue, and they defeat the dancers together. Taking a breath on the roof of a nearby building, Harper inadvertently startles Cass with a memory of a bloody murder, causing her to disappear. Though they search for hours, Dick and Harper cannot locate either her or any trace of Mother. Dick says they have to stick together, but has no plan for the future.

Tim Drake and Jason Todd, meanwhile, follow the black marketeer from the last issue into a church, but when they enter, he is clearly under the influence of fear toxin, and sees them both as demons from hell, screaming that the Angel of Death has done this to him.

Valentine’s second issue is a competent action issue, but on the whole, doesn’t live up to the detailed character work and beautiful artwork of her first. Though the inventive parallel between Bruce and Dick’s first face to face meetings with Mother is a very interesting change from the “two figures flying across the top of the page” around the credit box, there’s nothing that matches the absolutely fantastic spread of Harper and Cassandra viewing the ballet.

Scot Eaton, penciller for Steve Orlando’s issues, provides the three pages marking time during the Tim and Jason plot – and sadly, it’s exactly that. No real character moments aside from Jason’s memories of his death at Joker’s hands, and a reiteration of the fact that Mother and Scarecrow both like to dose their followers with fear toxin. The focus on churches may hint at the reappearance of Jean-Paul Valley, or Azrael, following up from issue #5’s offhand remark about the Order of St. Dumas, but so far, it doesn’t provide much real depth of character or world building.

For an issue dealing with the first face to face confrontation with the Big Bad of the series, this one proves remarkably unsatisfying. While it’s reasonable to expect that only a third of the way through the series, Dick and company won’t succeed in defeating Mother, the complete destruction of any leads or trails, as well as Cassandra’s flight from the group, leave a very bitter taste in the reader’s mouth. The nicely paid off element of the ballerina’s relationship with her manager was well done – reminiscent of the recently released Jessica Jones Netflix series, in which a loved one must deal with a brainwashed or mentally controlled individual, convincing them they have completed their mental directive without actually doing damage to themselves or others.

At the end of the second month of Batman and Robin Eternal, we’ve discovered two of Mother’s primary modes of attack – a mind controlling signal with unknown preparation time that turns large groups of people into attacking mobs, and individual personality creation of sleeper agents to the order of mysterious and powerful individuals and groups. Dick has come face to face with Mother herself, but the villain has anticipated every move of our heroes, and nothing they do has made any real dent into their plans – or even uncovered what the overall plan is. Hopefully, with a focus on Tim and Jason coming, this sense of defeat will be turned around soon.

The series closes out its second month in disaster, as Mother outmaneuvers our heroes, and Cassandra Cain takes flight.