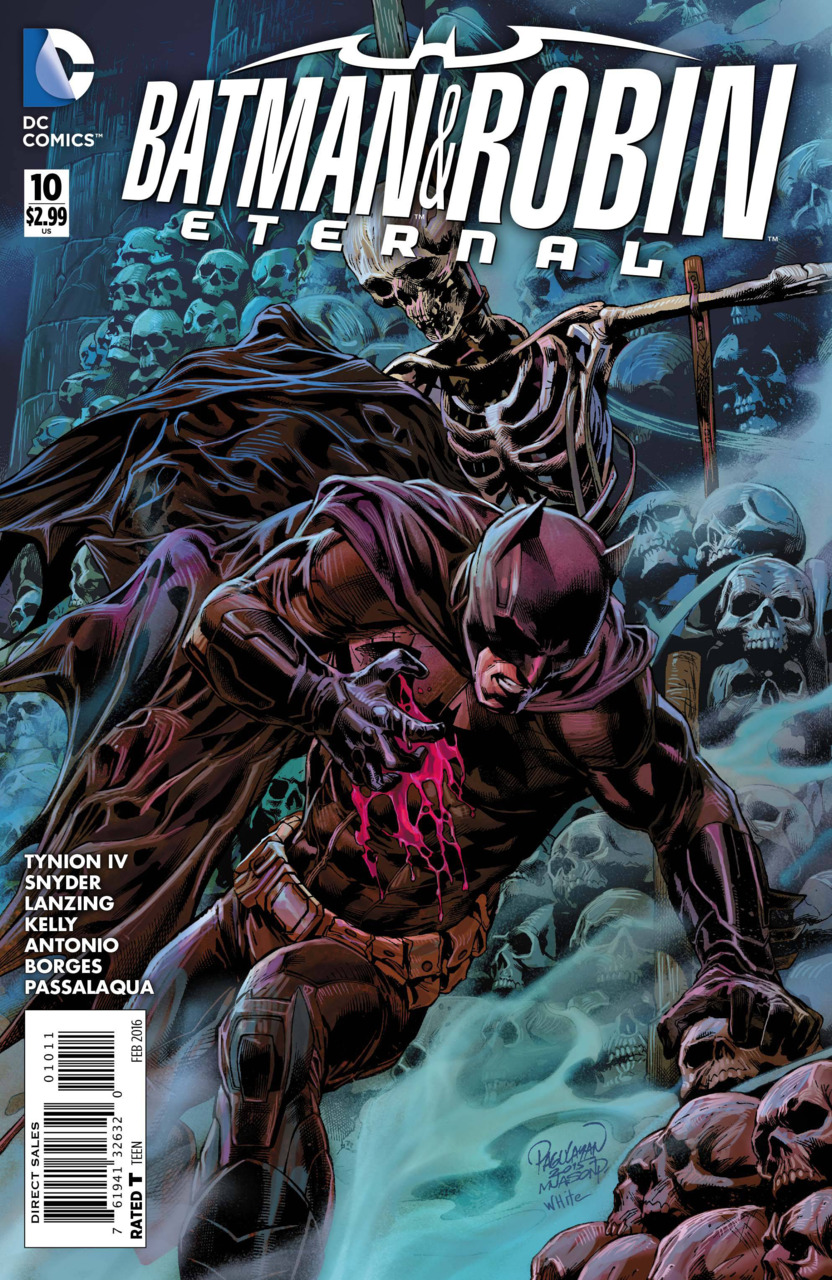 As Tim, Jason, and Bane confront Azrael, who wields a flaming sword, Bane chooses to take on the Angel of Death directly while the other two face a large number of St. Dumas fighters. Tim observes that the fighters are much faster than normal humans, concluding some bio-engineering must have been performed on them. Azrael overpowers Bane, then touches his forehead, causing Bane to see visions and change his side in the fight. Seeing this effect, Tim and Jason quickly flee the scene.

Taking out a drone, Tim hacks it to find the mainframe of the compound. Following what he finds, he instructs Jason to use his gear to hack it while he defeats the St. Dumas fighters who burst in on them. Jason’s hacking reveals that Jean-Paul Valley is the name of Azrael, and he’s one of Mother’s children.

Flashing back to Prague, Bruce finds Dick in the Prague Batcave injured after Bruce’s confrontation with Mother and Orphan. He orders Dick to stand down so that he’s not killed, but Dick refuses and storms off on his own. Bruce returns to Mother as Batman and says he’s ready to listen, hinting that his parents had secrets from him as well.

Back in the present, Tim and Jason face off against Azrael, and after some initial success against, Tim is overpowered and shown visions just as Bane was. Jason rescues him, but Tim is convinced by the visions that they have failed Bruce. Together, Red Hood and Red Robin fall into the sea surrounding the St. Dumas compound, protected by Jason’s use of Tim’s shark repellent.

Meanwhile, in Prague’s present, Harper and Dick follow a trail of documents and computer files to the house of David Cain, the man they believe to be Orphan. They are greeted by a mysterious woman in sunglasses and gloves who calls herself the Sculptor, and seems to know everything about Harper.

Another break in the tradition of two figures falling or flying through the air for the credit’s page, though unlike Genevieve Valentine’s structuring, this one doesn’t have the same dramatic impact. Roge Antonio partners with Geraldo Borges on art, but unlike the past arcs, no fill-in pages are specifically indicated, which possibly contributes to the unusually consistent feeling on the art for this issue. Nothing stands out particularly (though Tim’s Azrael-addled visions are pretty spectacular), but the solid character design helps maintain a strong narrative engagement.

Jackson Lanzing and Colin Kelly continue the banter from their first issue – the payoff to Tim’s joke about shark repellent last issue was particularly delightful. They seem to have a real handle on Tim Drake’s character in particular, balancing his new 52 arrogance with some of his original nerdy unselfconsciousness in the scene where he hacks a St. Dumas drone and proudly announces he has “Nerd skillz for life.”

Batman’s conversation with Dick and Mother in the flashbacks was sadly a weak spot in an otherwise much stronger issue. His overbearing protectiveness of Dick seems inconsistent with his treatment of Robin during the plane chase and aftermath, and turning back to Mother when Dick leaves certainly sets up the mysterious Egypt flashback from the first issue, but doesn’t make much sense considering Batman’s character in general. This could be the result of a secret plan on Bruce’s part, but right now feels very jarring.  Additionally, the constant hinting at secrets in character’s backstories seems a bit too much like the constant “Who is the Big Bad?” questions during the first Eternal – questions that are central to the main plot, but are strung out far too long for useful tension and become merely frustrating for the reader.

Harper and Dick only have a few pages at the end of the issue, but the relationship and characterization aren’t as forced as last issue. Harper demonstrates more characteristic and unique skill in hacking in disguise while Dick distracts using his James Bond impression, and the whole montage of their plan has an energy and appeal that the “Oh, Harper, you are better than the whole Batfamily combined” conversation last issue completely lacked.

The dual reveal of the Orphan as David Cain and the new character of the Sculptor promises exciting things for next week. Hopefully Cassandra Cain will return and her backstory revealed as we approach the midpoint of the series.

Lanzing, Kelly, and Antonio provide a much stronger second issue than their first, providing action and character stylishly and with humor.