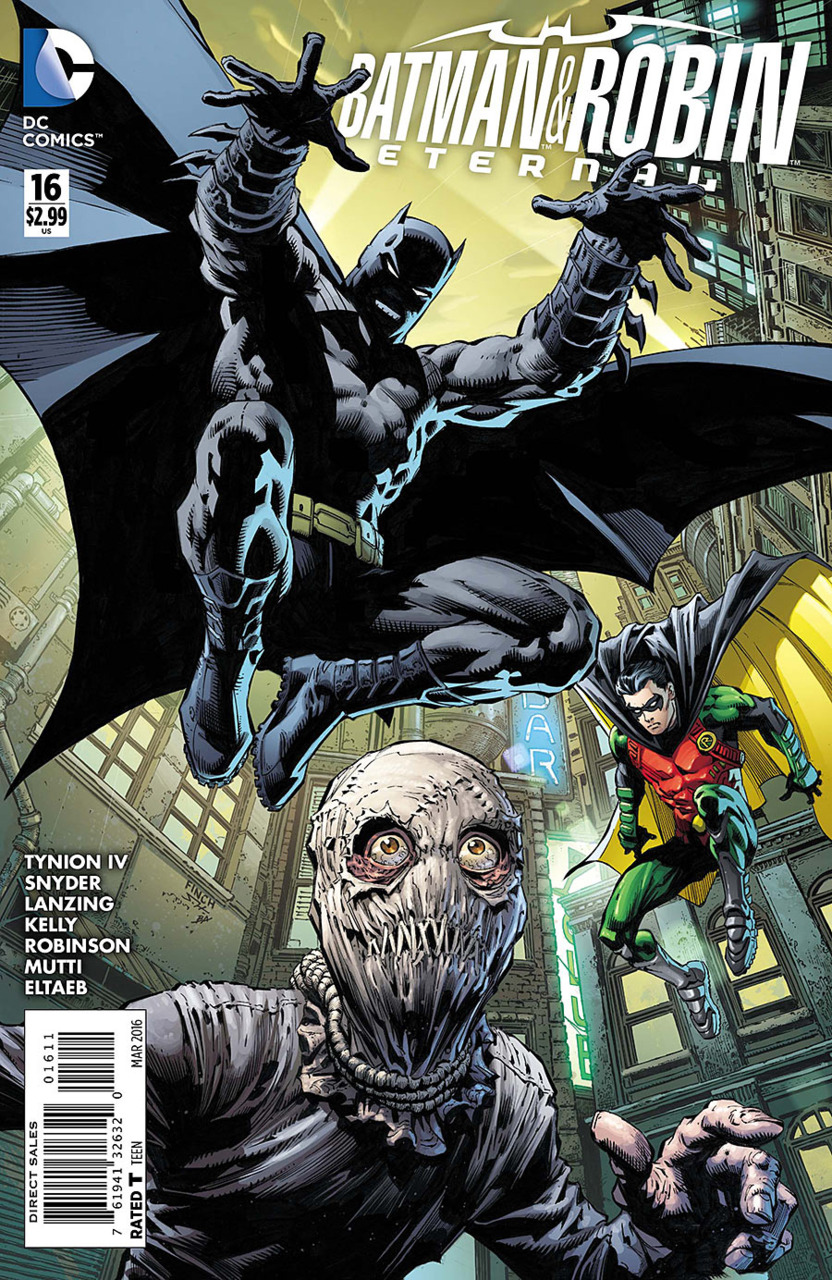 Tim Drake (Red Robin) and Jason Todd (Red Hood) fight their way to the heart of the Order of St. Dumas together, and Azrael (Jean Paul Valley) proves his worth.

In Cairo, Batman (Bruce Wayne) and Robin (Dick Grayson) chase down Scarecrow. Robin catches the villain and thwacks him on the side of a building. Smiling, Batman tells Robin “I regret what I said before. you’re an excellent partner.” Sadly, he then sends Robin off with Crane to Gotham, so that he can continue his game against Mother alone.

Tim Drake struggles against St. Dumas’s power in the present, after he and Jason Todd infiltrated the secret city of Gnosis, the heart of the Order of St. Dumas. Dumas uses his almost incomprehensible cybernetic web of hookups to bring Jason in, under the influence of Ichthys, a neurokinetic bioprogramming algorithm.. He explains to Tim that Ichthys destroys the ability of a person to feel fear by exposing them to their greatest trauma.

In Jason’s mind, he is Robin once again, being savagely beaten to death by the Joker. Ichthys allows him to become an Azrael-influenced Red Hood, and turns the tables of the memory and begins beating the Joker to death instead.

In Gnosis, Azrael is furious to find that Dumas considers him a failure. Tim helps him remember that Mother had Orphan murder his parents, and he breaks free of Tim’s concrete to fight the Order. Azrael severs Dumas’s connections, but the Order sends many knights to battle them, and Tim and Azrael are forced to fight to escape rather than pursue the mastermind.

Tim analyzes Jason, diagnosing Ichthys as a virus for the brain, and the target is the ability to feel fear. Azrael helps him understand that to help Jason break free, he needs to break into his mental trance and help him reject the violence that will remove his identity and replace it with that of Mother’s children.

In Jason’s mind, he hears Tim tell him that he’s not a psychopath, but instead, is a Robin. The mask of Red Hood melts off, and he gives his memory of the Joker back the tire iron. The Joker asks him how he feels, to which Jason responds, “I feel afraid. But I’m not alone.”

In Gnosis, Jason wakes up, telling Tim that he’s not good, but “I think I’m finally ready to try.” He, Tim, and Azrael fight off the Order, and Azrael tells them to run as he destroys the city. Tim wants to go back for Azrael, but Jason says that he’ll make it through. The two Robins make it to a plane, and Tim tells Jason that he no longer owes him one with a smile. Together, they head to Spyral to meet with Dick.

Back in Cairo, Batman finds a gun with a note to fulfill Mother’s orders, walks into the city, and we hear a “Bang.”

Jackson Lanzing and Collin Kelly provide a really strong Jason Todd and Tim Drake issue, highlighting their bond as brothers as well as their history and strengths. Hopefully, the work they do with Jason here will carry over into other titles with him, allowing him to grow closer to the Bat-family rather than keeping them art arm’s length (I wouldn’t hold my breath, though).

This writing team is the first to wrap up all of their solicited issues, and they’ve done a really enjoyable job of trying together threads they laid out in their first arc, like Jason and Tim’s relationship, and Tim’s plane being blown up. Their enjoyment of Batman and Robin’s histories really come through, from the title of this issue, “The Dying Joke,” riffing off of the most famous Joker story, to the way they play with Jason’s memories of “A Death in the Family,” and their re-imagining of Azrael’s history and character. These two will be taking over writing duties on the Grayson title for a few issues, and their work on Batman and Robin Eternal here promises good things.

The flashbacks to Bruce’s time in Egypt feel more than a little forced – just stringing things along to remind us that stuff happened in the past, rather than providing any real moments that we needed to know. However, Bruce’s conflict in trying to mend his relationship with Dick while still following his ill-advised game with Mother does provide a note of character that shines through the plodding scenes.

Sadly, though the writing shines, the art is no more than serviceable.  None of the three artists (Andrea Mutti, Roger Robinson, Goran Sudzuka) provides very memorable or even on-model character work, and though colorist Gabe Eltaeb puts in nice work, nothing really stands out visually.

Tim and Jason face their demons, both physical and spiritual, and come out stronger than ever.