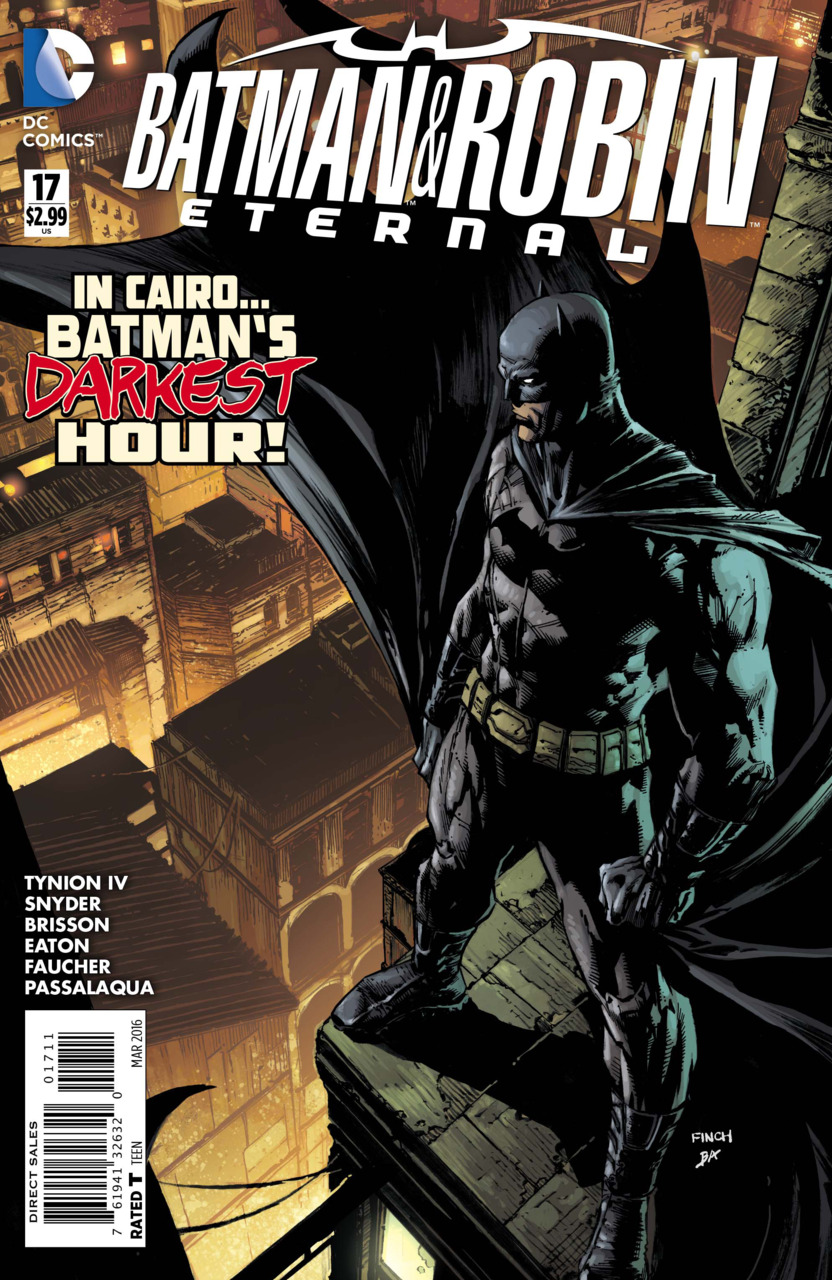 At St. Hadrian’s School for Girls, the Spyral HQ/training facility, Orphan makes some extremely genre-savvy comments about Dick bringing him to his base being a mistake. Dick and Helena ignore his taunts, and begin a punishing interrogation. Orphan resists the Spyral technology, and instead begins to tell Dick about Batman’s actions in Cairo, many years ago.

The scene cuts to just after Batman shoots the parents of the young boy, when Mother approaches and congratulates him. She then says that his new Robin will be delivered to him, saying this was all a test. The boy then screams that the adults are still alive, and Mother orders Orphan to kill Batman, saying she’d overestimated Batman.

Batman counters that she’s wrong, he planned this all with Scarecrow, and that he never needed a replacement for Robin, since Dick is a worthy partner. He sets off explosives in the alleyway, giving him a distraction so that he can capture everyone. Orphan, however, escapes his grappling line, and as Batman cuffs Mother, he attacks again. As they fight, Orphan says that Mother’s real replacement for Robin is in Gotham, and their organization will kill the child’s parents that night. When Batman threatens to beat the target’s name out of Orphan, the latter sniffs that Batman’s unwillingness to kill makes his threats useless.

Mother has the boy used in her test, break her hands to remove Batman’s cuffs. She threatens to slit the boy’s throat if Batman doesn’t stop. The Orphan uses the standoff to hit Batman in the head, and Mother orders Batman’s death.

In the present, Harper wanders the halls of St. Hadrian’s, making snide comments about the assassins in training, and lifts a keycard from one of them.  Helena and Dick have had no luck with Orphan, and as they discuss how to proceed, are alerted that Red Robin (Tim Drake) and Red Hood (Jason Todd) have landed on the roof. The two Reds say they’ve found Mother’s secret weapon.

Harper slips into Orphan’s holding area, and rages at him for what Sculptor showed her about Cassandra’s upbringing. He responds by hinting that there is more to Cassandra’s story that will turn Harper against everyone.

Ed Brisson picks up writing duties again, and while this issue isn’t as focused on the mind-whackery of Sculptor’s psychic history lessons, they maintain his unnecessarily dark tone (as Donovan noted in his commentary on Cassandra Cain’s new origin story) in having Dick participate in fairly brutal torture of Orphan. Brisson’s narrative again heavily features the past, making one wonder if he tends to choose to explore through flashbacks, or if the breakdown was that coincidental.

The reveal that Batman didn’t kill the boy’s parents in Cairo comes as more an anticlimax.  Despite all the visceral impact seeing Batman recreate his parent’s murders in the first issue, it’s hard to imagine a Batman fan who actually believed his was guilty. Keeping the pretense that Batman would actually murder for Mother up for almost two thirds of the series is more than a little pointless.

Scot Eaton seems to be the fill-in artist of choice for this series, but when called upon to do a full issue, his work is solid, if unremarkable. After last week’s trainwreck of three artists, the consistency is nice to see. His David Cain surprisingly reminds one of Damion Scott’s rendering of the character, and the issue makes a lot of narrative sense, unlike last week’s offering. Hopefully, the full-issue credit indicates that editorial has given up on trying to squeeze a full two issues out of an artist, and just assigning a new artist every issue to give the chapters a better flow.

Ed Brisson? (Originally solicited to be Steve Orlando) Scot Eaton art (which would make him the dominant artist/fill in, I think, but I bet he’s only doing half the issue)

Not a lot of character moments this issue, though Harper’s infiltration efforts provide the most distinctive notes heard. It’s nice seeing her defend Cassandra Cain to Orphan, but hopefully next issue will stop the unnecessary dragging out of who Cass’s murder victim in her flashbacks was – and will almost certainly turn out to be Harper’s mother. The dragging out of this mystery leeches a lot of the engagement the tragic situation could have, sadly, but hopefully Harper’s journey will be handled well.

A decent issue, finally laying to rest the silly speculation about Batman raised by issue #1, but does little more than move most of the active characters in the narrative to the same place.