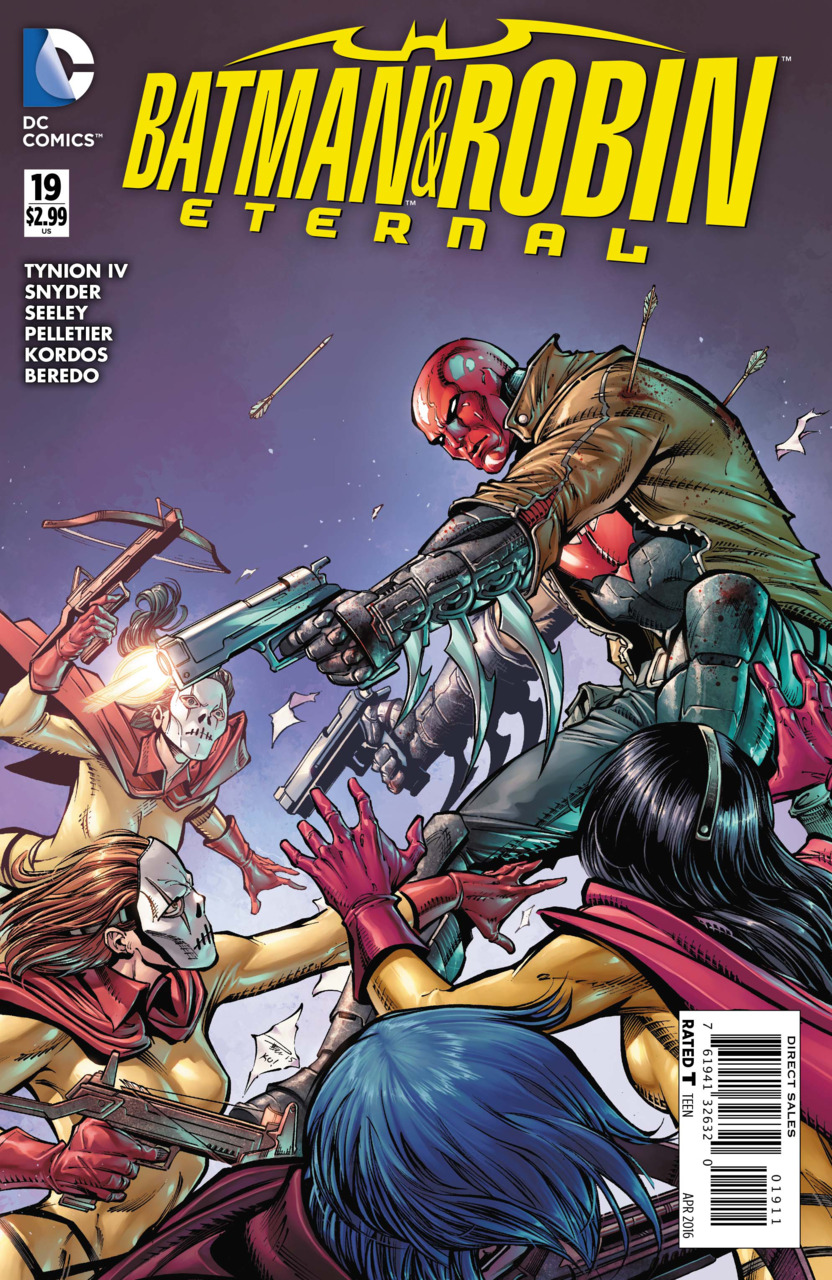 Just outside St. Hadrian’s, a school bus full of children murderously repeating “Mother” crashes into a coffee shop. They tear people to pieces. At the school itself, a teacher defends herself against her students. An older student saves her, and tells her that she can hear a voice telling her to kill the adults in Mother’s name.

Poppy Ashmore and Orphan (David Cain) watch in Spyral’s cells as Harper is overtaken by Mother’s Ichthys virus. Red Hood (Jason Todd) arrives looking for Harper, but she turns on him with her taser. Meanwhile, Matron (Helena Bertinelli) rages at Cassandra for bringing trouble to Spyral’s doorstep. When Dick Grayson defends her, Helena rounds on him, and they trade insults. Red Robin (Tim Drake) discovers Mother’s true goal – the Hypnos satellite.

With Jason and Harper unconscious, Orphan and Poppy flee from the mob of Helena’s students under the influence of Icthys. Dr. Netz explains that the satellite allows for widespread projection of the Hypnos mind control signal, and Tim extrapolates that Mother wants to send Icthys global with this technology. Unfortunately, the signal then takes over Tim and Cassandra, causing them to attack the adults. Helena brutally fights back against Cassandra, but before she can shoot a crossbow bolt through her head, Dick explains that it’s not Cass’s fault. Tim, gaining momentary control, tells the group that Scarecrow’s fear toxin provides protection against the signal, and Dr. Netz slaps masks onto Tim and Cass, giving them back their minds, or at least a fear-riddled version thereof. Tim manages to maintain composure even under this stress, and comforts Cassandra.

A bloody and furious Helena leads a plan to shut down St. Hadrians by turning off the generator powering the compound. Dick takes Cass to save Harper, and finds Jason fending off the girls of St. Hadrians, including Harper. As Dick and Jason trade quips, Cass equips Harper with a fear toxin mask. Unfortunately, the toxin causes Harper to fear Cassandra herself, and begins strangling her.

Tim Seeley, returning to this series for his final two issues, brings a much-missed sense of humor. Calling back to his work on the Grayson series, the jokes about “Jim and Juan,” the nicknames for Dick’s sit-me-down-upon the students trade between themselves are hilarious. Unfortunately, though the action moves at a breakneck pace, not much character work occurs. A few moments, like Tim reaching out to Cassandra to steady her after the fear toxin takes effect, and Cass making a beeline to help Harper at the end, make an impact, but as a whole, there’s just not much to this issue emotionally.

Paul Pelletier, the artist who collaborated with Seeley in his first two issue arc, provides solid work, providing on-model character work, appealing lines, and even a strong callback to Dick’s fear-toxin nightmares when Tim puts on the breath mask. Pelletier’s work with Tim in general is strong – you actually get a sense of Tim’s age (16) and his character – intelligent, concerned, and in this issue, tormented first by Mother’s mind virus and then Scarecrow’s poison.

Several readers of the series have commented on the similarities between the fight against Mother and the fight against Leviathan in Batman, Incorporated. I would also point out that the early 2000’s miniseries series The Batman Family also contains a battle against a powerful, secretive female villain with a strong maternal connection to the Bat-family. The similarities, while definitely present, echo with the way Batman generally fights against this type of villain. The comparison does highlight the fact that while an entertaining story, Mother doesn’t seem to stand out as one of Batman’s great new villains. It’s possible that issue #21, promising a look at Mother’s origin, will provide that kind of depth, but we’ll have to wait and see.

Not many dangling plot threads remain to be tied up. A possible mechanism for Mother’s final attack appears in this issue, and really, the only question on this reviewer’s mind is how Jim Gordon Batman, Duke Thomas, Damian Wayne, and above all Stephanie Brown will be re-incorporated into the Bat-family for the massive end battle.  Hopefully the team will bring a satisfying conclusion to this wild ride.

I’m adding a new section to my reviews – “Pick up/Pass” – in which I make my suggestion on whether you should buy this issue.  For Batman and Robin Eternal #19, I recommend waiting for the trade, as this issue doesn’t do much more than provide nicely written and drawn transitional fights.

While Tim Seeley’s return to the series brings a dash of humor, and Paul Pelletier’s art is a step up from the past few issues, nothing much of weight happens in the brawl at Spryal.