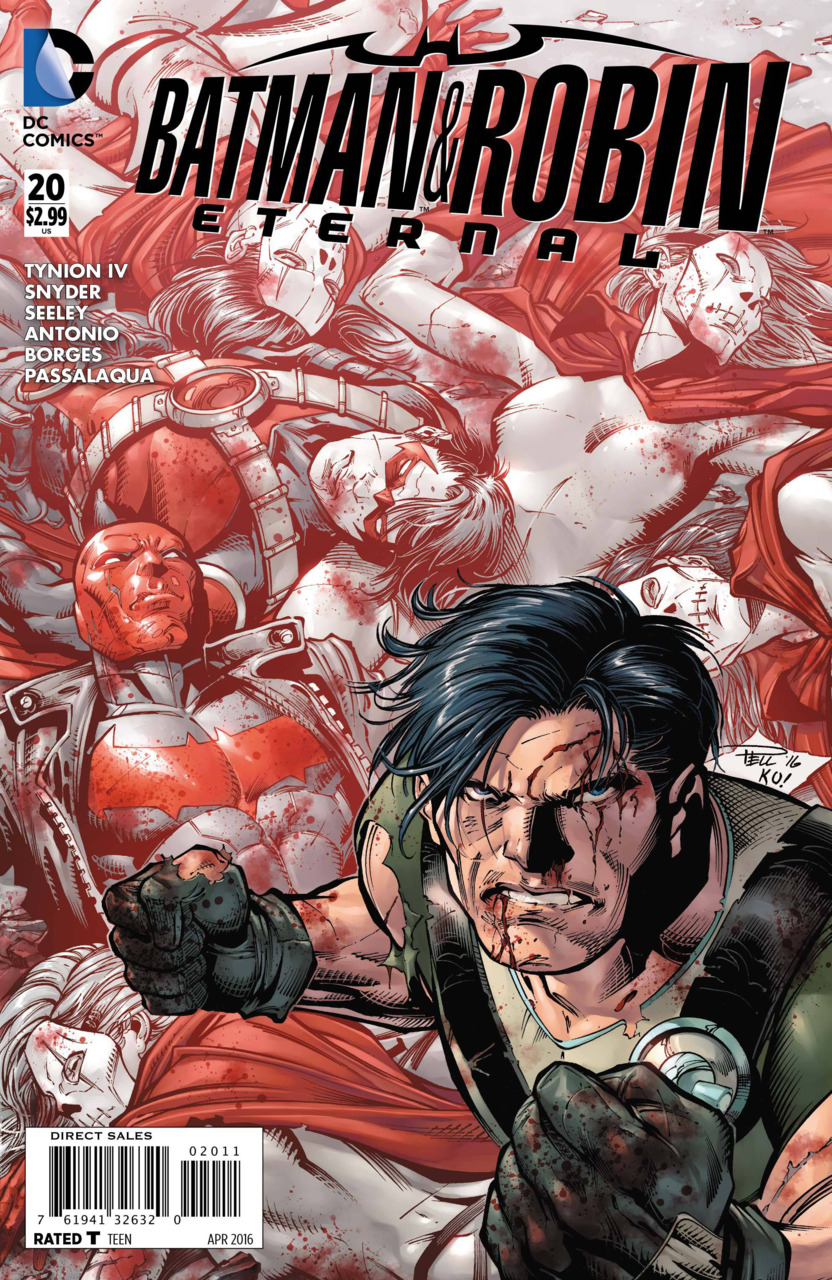 In Brief: Orphan (David Cain) and Poppy score a major victory for Mother in the battle at Spyral against Dick Grayson, Helena Bertinelli, and their allies.

Summary (Spoilers): The “Not so secret anymore” Spyral headquarters at St. Hadrian’s academy for young women burns under Mother’s assault. Miss Gold, a teacher at the school, and a student Paris Pantoja, hide from Mother’s mob in the gym.  Gold tells Paris that she may have to kill her fellow students as the mass of mind-controlled children converge on their location.

Meanwhile, Tim Drake (Red Robin), Dr. Netz, and Helena Bertinelli struggle to get to the generator, to disable it and stop Mother’s signal.  Orphan follows them malevolently as Helena fights off the deluded attackers.

Jason Todd (Red Hood) and Dick fight together as Harper Row tries to kill Cassandra Cain. The combination of learning Cass killed her mother, the mind control signal, and the fear gas drive Harper to murderous rage, and Cass sadly fights back.

Helena, Tim, and Netz reach the elevator to the generator, and Helena deduces that Orphan has set a trap for them by cutting power to the elevator. They set off down the shaft, climbing the cables.

Dick tries to reason with Harper, but he can’t reach her. Before he can try again, Poppy attacks him.

As Tim and Dr. Netz reach the bottom of the elevator shaft, Helena turns to hold off Orphan’s attack.

While Dick defends himself against Poppy’s attack, Jason tries to restrain Harper. He refuses to be provoked by her attacks, his breakthrough from confronting Ichthys with Tim inspiring him to be more Red Robin than Red Hood, but Cass stuns all three of them with Harper’s taser and the sprinkler system.

Tim and Dr. Netz being trying to shut down the generator, Spyral’s obsession with reversal forcing Tim to code backwards – while fighting the effects of the fear toxin.

Poppy and Orphan, having engaged Dick and Helena in combat, unleash a mind control device in the form of a tattoo eye in their palms which collects the Somnus satellite’s control information from their Hypnos implants and knocks them out. Mother radios them to tell them of her pride in their actions. As they succeed, so does Tim, and the power shutdown frees the children from Mother’s control. Poppy and Orphan beat a hasty retreat.

After the dust settles a bit, Dick finds Helena in the ruins of the town neighboring St. Hadrian’s. She tells him that she kept the Somnus satellite functioning so that one day, she and Dick could use it to wipe the memory of Dick’s identity from the world’s memory and he could be Nightwing again. Dick tells her that Poppy and Orphan took Harper and Cass to Mother, but they are interrupted by Damian Wayne arriving on his pet monster bat Goliath. The current Robin tells them they’ve made a mess, but he is here to fix it.

In Depth: Tim Seeley closes out his four issues on Batman and Robin Eternal with a bang. After a fairly weak lead in last week, he ties up many of the threads he launched way back in issues two and three with Spyral. The plot of the issue centers around David Cain, the Orphan. I’ve grown more and more disillusioned with Cain as a villain is this story. The new 52 has stripped any moments of tenderness away from his relationship with Cassandra Cain, which gave some complexity and tension to their relationship in the post-Crisis continuity. Here, her rejection of him makes perfect sense, whereas before, she struggled with her memories and her greater knowledge of her father’s character, from her beginnings in No Man’s Land to the anticlimax of Bruce Wayne: Fugitive.

Thankfully, Cain’s antics, though central to the plot, take second place in reader engagement to the interactions between the heroes. Even though Seeley reportedly has one more issue on Grayson, this issue feels like a fond farewell to the world and relationships he and Tom King created in that title. A lot of great humorous moments abound, from Dr. Netz’s creepy yet weirdly comforting attitude towards Tim Drake, Jason’s growth from the thug who wanted to beat Cass up to his concern for Harper and Cass’s capture, Tim’s heroism in the face of mind viruses and fear toxin, and above all, Dick and Helena’s relationship, full of tension and trust. Even the four girls who ogle Dick as their gym teacher, get a nice spotlight, with one of them able to resist the brainwashing broadcast and protecting her cruel teacher, bravely preparing to lay down her life fighting her mind-controlled classmates.

The construction of the issue is also really well done – the plot jumps between the three or four threads easily, creating greater and greater tension as the mob of students overruns the school until Tim manages to save the day. Though some moments of the haste a weekly series generates poke through – some fans have pointed out that Harper’s fear-toxin dialogue is clumsy, Harper’s taser is inconsistently empty and then fires again, and Poppy and Orphan’s mind control hands come from nowhere – Seeley provides a satisfying conclusion to most of his thematic elements throughout the series, as well as providing beautiful nods to character continuity in scenes such as Helena quoting the Bible before fighting bravely to protect her team.

Roge Antonio provides some of the strongest art the series has seen in awhile. Though Paul Pelletier’s cover is weaker than last week’s – the static nature of Dick’s pose, the unconscious heroes behind him, and the rather monochrome overall color scheme work against its memorability – the interiors are appealing, clean, and consistent. On a completely speculative note, it seems that the writers who most often have art problems tend to be the less established ones – Tynion and Seeley seem to have fairly solid runs of one or two artists, while the rest of the writing stable is made up of paint-dryingly-fresh comics writers, and some of the pages having different artists might spring from editorial-mandated last-minute changes. That being neither here nor there in terms of proof, whatever the cause, this issue benefits from having one artist with a distinct yet familiar style.

Antonio uses shadows in a really nice way, creating silhouettes that highlight the danger and drama of this scenario, and his facial expressions for Dick and Helena particularly are really effective, selling the balance between these two complicated characters really well. The final scene, where Helena lets a tiny moment of her true value of Dick slip through the mask of Matron Bertinelli, hits home harder because of Antonio’s work. Even little details, like the Spyral spiral in the coffee Helena drinks calling back to last issue’s doomed coffee-drinker, and Helena’s spiral earrings, demonstrate that Antonio was able to put some care and thought into the pencils for this issue even under the deadline crunch of a weekly series.

There aren’t a whole lot of dangling plot threads left to tie up for this series. Last week, I thought the whole satellite plot felt a bit contrived, sort of like the “who is the Big Bad this week?” rinse and repeat cycle of the first Eternal, but the way Seeley manages to work character moments into the action more than makes up for the limited plot development.  Next week, James Tynion will probably delve deeply into the past, answering questions of Mother’s survival, Batman’s relationship with Cassandra Cain, and possibly even some bothersome questions about Harper Row, now that we know her true connection to Batman and Robin.

Pick up/Pass? Pick up – Seeley’s final issue of the series is a great one, with awesome character beats and excellent action. Roge Antonio’s art is really strong as well.

In Conclusion: Dick and the Bat-family have their work cut out for them, but fortunately, they seem to be pulling together in the face of Mother’s success.