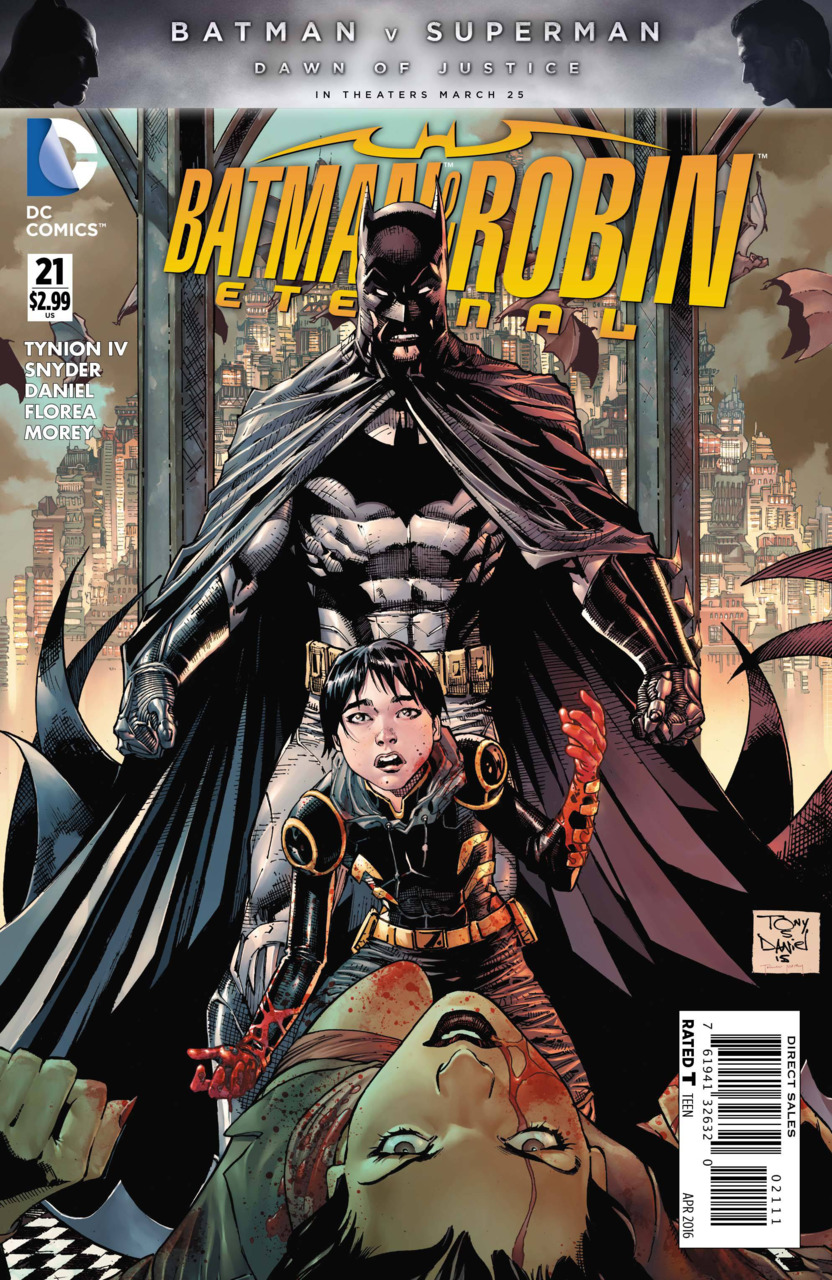 In Brief: In the aftermath of the Cairo disaster, Bruce Wayne must ask himself: how is Batman different than Mother?

Summary (Spoilers): In the past, Batman returns from Egypt and his bloody confrontation with Mother and Orphan, to observes Harper Row, eleven years old, reacting to the death of her mother at the hands of Cassandra Cain. Batman and Robin (Dick Grayson) have much to do in cleaning up Gotham after their absence chasing Scarecrow and Mother – a montage shows them fighting Deadshot, robots, thugs, and saving a boy, but Batman is distracted.

Batman believes the case of Mother is closed, having examined Mother’s body in Cairo. However, he is haunted by Mother’s accusation that his training of Dick is just as evil as her molding of her children. Having done a background check on Harper, Batman knows that she would, indeed, be the perfect candidate for Robin. Dick notices his preoccupied state, and Bruce tells him he’s going back to Europe and that Gotham is in his hands.

As Bruce Wayne, he finds a small hotel owner named Miss Marchenko. He tells her he’s looking for the history of Mother from fifty years ago. He assures Miss Marchenko that Mother is dead, but he needs to know why she committed her terrible evil.

Miss Marchenko tells him of a tiny country called Gardevia. During the Cold War, it was a dark place, seething with corruption and rot, and when the Soviets were finally provoked to take a closer look, the paranoia and moral compromises brought everything to a bloody head. The soldiers opened fire in a tavern where Mother worked to pay her parents terrible debts, then proceed to slaughter the entire village. Mother ran for her family, but was only in time to see them brutally gunned down.

That night, the Soviets piled all the bodies in the middle of town and stabbed them with bayonets. Mother was stabbed seven times, but maintained her illusion of death. When the soldiers slept, she slit every single one of their throats. Making her way to Miss Marchenko’s nearby town, she watched Miss Marchenko’s parents hit her, and in the night, Mother woke her up and murdered her parents in front of her, telling her that Miss Marchenko was her child now.

Bruce apologizes for making her relive such a terrible story, and leaves, relieved in the knowledge that Mother can’t hurt anyone in death. But Miss Marchenko knows better, and tells Mother behind her to make it quick. Mother obliges with a vicious stab in the neck.

Returning to Gotham unaware of Mother’s continued existence, Batman observes Harper and her brother Cullen from afar, deciding that if he takes them in, they will inevitably become like Dick, and he would be doing exactly what Mother claimed: making child soldiers. He muses on Cassandra’s rejection of Mother and Orphan’s abuse in refusing to kill the Row’s father as well as their mother. Batman feels he cannot help the children directly, but he does attempt to force their fleeing father to take responsibility for them. As he deletes his casefile for Mother after making a secret copy on a Bat-flashdrive, Batman tries to think of the children Mother can’t hurt now, and how to help Dick make his own choices.

In Depth: James Tynion returns for his penultimate issue, answering the question: Why didn’t he help Harper Row after his game directly led to her mother’s murder? The answer – because Mother had wormed her way into his head, causing him to doubt the rightness of involving children and young adults in his crusade for justice in Gotham.  Tynion’s introspective writing for this story, set entirely in the past, is really strong. Bruce’s moral dilemma is really affecting, and Tony Daniel’s art is quite effective. The strong facial expressions and exciting action moments in the beginning montage push a story that could be a bit of a filler into a very good comic reading experience.

Though in general this origin story for Mother reads well, a few missteps remain. Mother’s survival, especially after Batman examines her body in Egypt, remains unexplained. While several explanations do come to mind, no real purpose is served in not telling the reader how she escaped her own poison, especially in an issue which exposes Mother’s motivations in such detail.

While it does rankle a bit that the editors chose to spend Tony Daniel’s time on this flashback issue instead of providing artistic continuity by scheduling him to draw the final issue, there’s no denying that the panel design, expressive character interaction, and excellent colors by Tomeu Morey serve the story well. A few character moments feel off, though – the first in the cover, where Cassandra’s face jarringly doesn’t match her previous depictions as a child, and late in the comic, when Mother murders Miss Marchenko, her face looks underdrawn. Furthermore, for a series so focused on how Cassandra Cain’s past affects the future, there’s no appearance of her other than the cover, and only a mention that indicates that Batman doesn’t even know her name. Perhaps the final quartet of issues will show Batman and Cassandra’s first meeting, but this felt like a missed opportunity in that respect.

Pick up/Pass? Due to strong writing and solid art, we recommend picking this issue up, though it might also be worth waiting for the trade due to the intertwined nature of the plot.