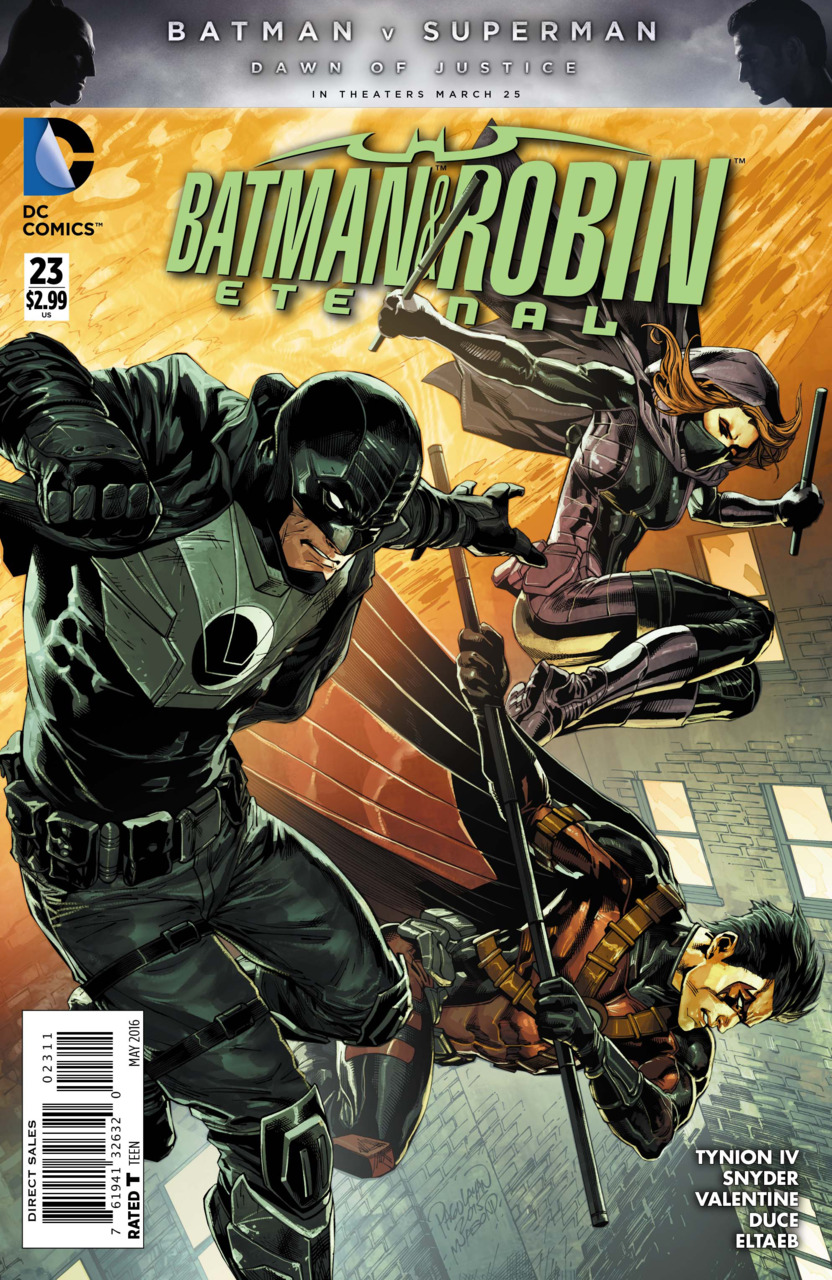 In Brief: During the first hour of Mother’s worldwide attack, the Robins use Midnighter’s teleportation gates to recruit help.

Summary (Spoilers): As we see children in cities across the globe hearing Mother’s Ichthys signal, Harper Row’s voicemail recordings to her brother Cullen play, from the beginning of the series to the current point. Harper and Cullen’s roommate Spoiler (Stephanie Brown) tells him to stay put while she goes to fight the mind controlled children, but before she can head out, Red Robin (Tim Drake) pops in using a teleportation door borrowed from Midnighter. Tim assigns Steph guard duty for the Scarecrow to prevent Mother from eliminating him as an asset, and Cullen insists on coming with Tim to find out what happened to his sister.

At Midnighter’s house, Tim, Cullen, Batgirl (Barbara Gordon), Red Hood (Jason Todd), Robin (Damian Wayne), and Dick Grayson convene, having recruited Spoiler, Batwoman, Black Canary, Katana, and Catwoman. They use Midnighter’s situation room to assess the situation and arm themselves. Twelve cities are under attack, each with a signal receiver, so the Robins and their allies scramble to take down the receivers.

As part of their plan to fight the children, they recruit Scarecrow to make a huge amount of trauma toxin, which breaks Ichthys’s control on a subject. Though initially recalcitrant (as all nasty villains are), a few threats from Red Hood and Spoiler convince him to get started.

As all of the heroes make their way up the towers holding the signal receivers, Dick heads to Mother’s base in the Arctic alone to rescue Harper and Cassandra.

In Depth: Valentine doesn’t provide closure to her arc in the same way that Seeley or Lanzing and Kelly did, but she does provide an excellent issue bringing in the other Bat-family members to counter the worldwide devastation of Mother’s mind control signal. The tone shifts from the melancholy of last week to all out assault with a side of heroic sass. Stephanie Brown gets a standout scene giving Scarecrow and his pathetic attempts to manipulate her a verbal smackdown, applauded by Jason.  The dialogue for all of the characters similarly sparkles, from allies like Batwoman who get only a few lines, to Midnighter, who snarks at Dick and provides a mentoring figure for Cullen.

I have to admit, I’m surprised that the ballerina didn’t come back from Valentine’s first arc. It’s harder to tell Valentine’s overall concerns than it is with Seeley (Dick Grayson and Spyral), Brisson (bloody flashbacks), or Lanzing and Kelly (Tim, Jason, and Azrael). That is except possibly the bonds between characters – Dick and Cass and Harper in the first arc, the four Robins and their allies in the second arc. Though she doesn’t emerge with quite as much of a distinct thematic concern, her dialogue voice is very strong.

Christian Duce’s art is functional – it doesn’t have the simpler appeal of Roge Antonio’s work, or the cold precision of Fernando Blanco’s, but it’s very similar to Scot Eaton’s – highlighted by Gabe Eltaeb’s coloring work. Jason’s mask, which has gone through a mind-boggling number of variations in this series, looks extremely grim in Duce’s rendering, and Eltaeb gives it an almost black look with red highlights, perhaps to emphasize Valentine’s dark humor in writing Jason here.

Carlo Pagulayan’s cover provides an exciting preview of what the last issue might look like – a very photo-realistic style approach. The cover is slightly misleading, as Midnighter never actually suits up in the issue, but it does focus on the newly added characters and the teleport doors, as well as hearkening back to the days where the title page of an Eternal issue would be character leaping or falling across the panel.

Pick up/Pass? Though the art isn’t as strong as last week’s, Valentine provides excellent dialogue and character interactions, leading to a Pick Up recommendation.

In Conclusion: Balancing the increasing cast of Dick’s allies well, this issue provides a solid building block for the finale by putting most of the pieces into play.