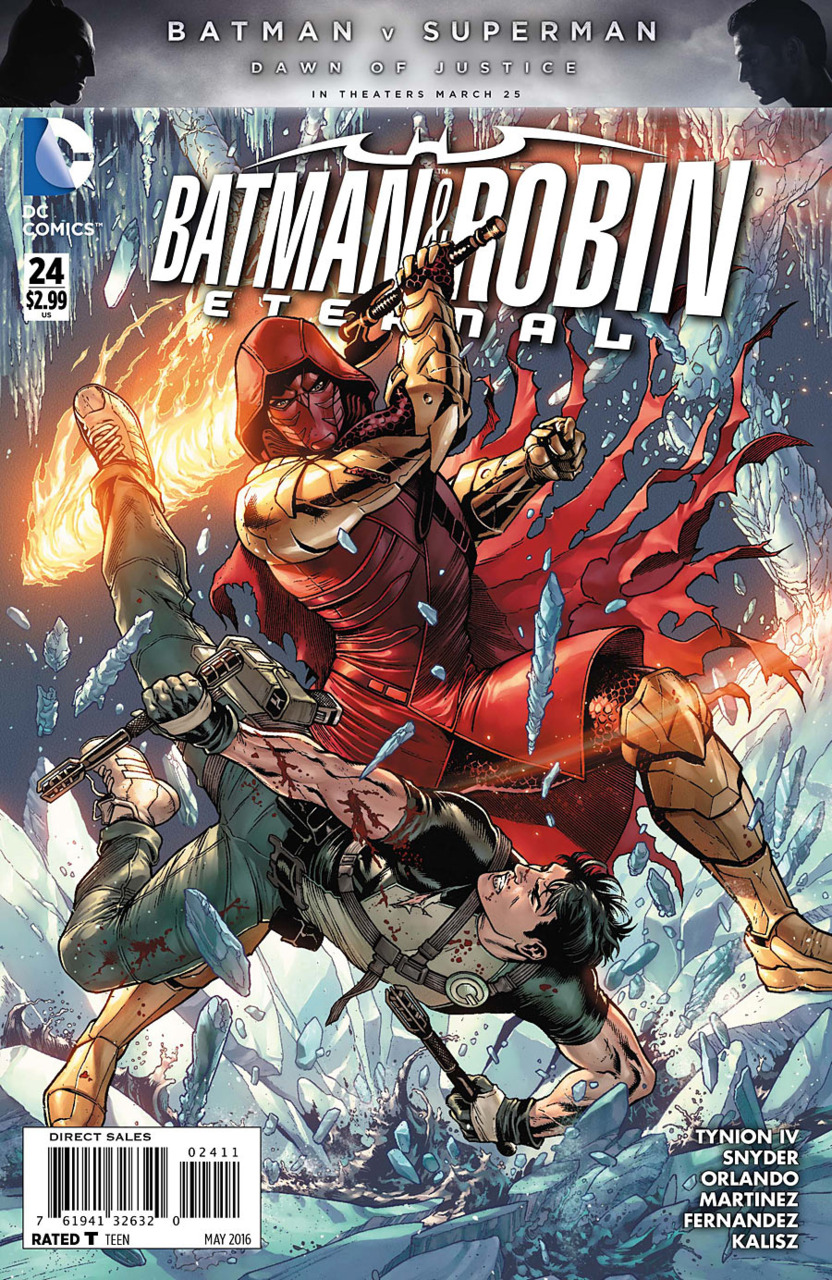 In Brief: Dick Grayson and his allies continue the desperate battle against Mother around the world.

Summary (Spoilers): We open pretty much squarely in the eight page preview with Dick snowmobiling towards Mother’s James Bondian Arctic supervillain base while his team radios him with updates of their battles around the world. The Robins’ list of allies has grown, as an updated two page spread of the worldwide battle shows:

All of the teams are holding their, except in Tokyo, where schoolchildren in uniforms have killed the Spyral agents. Midnighter, having geared up into his uniform, continues to run sitrep, and informs Dick that Tim and Jason are getting creative with the teleportation doors in their fights. Cullen Row, Harper’s younger brother, assists Midnights, and worries about his sister.

Meanwhile, Harper wakes up in Mother’s base, win a fancy bed with Mother bringing hot chocolate. Calling up a holographic display of the battle, Mother tells Harper that her ways are horrific but necessary. She gives her own backstory, and says she wants to make the world strong, and tempts Harper by telling her Batman abandoned her.

Outside, Dick sees the launch of several superfast planes, and warns his teams that they have incoming attackers. Before he can enter the fortress, a large jet crashes into the entrance, and Azrael pops out, saying he’s here to kill Mother. Dick disagrees, saying they must have justice, not vengeance, and the two begin fighting in the snow.

Mother gloats to Harper that the jets she just sent out contain her specially trained army of Orphan assassins, and we see all of Dick’s teams facing the new grey-clad threats. Midnighter, having promised Dick that he wouldn’t get directly involved, sees that reinforcements are needed, and tags Stephanie Brown (Spoiler) in to hold the line in Tokyo. She is enthusiastic and determined, and teleports into kicking one of the Orphans. Though outmatched in size, she manages to perform a takedown maneuver due to her training with Catwoman, Batgirl, and Dick.

Mother walks Harper through her base, ending up in front of a bound Cassandra Cain. She hands Harper a huge knife, telling her to cut ties with her past and kill Cassandra, her mother’s murderer.

In Depth: While it’s fun seeing the specifics of how the Bat-family ended up in the awesome two page spread from the original preview for this series, this issue does little more than tell us that the battle is continuing. Harper’s story is the only one which really progresses, with Mother revealing her plan and inviting Harper to join her. That being said, Steve Orlando gives many characters some really fun action moments. Tim Drake and Jason Todd get some really fun fights using the teleportation doors in ways that remind one of the video game Portal or the film X-Men: Days of Future Past. Midnighter’s snark, Stephanie Brown’s determination, and Dick Grayson’s confrontation with Azrael also stand out.

Artistically, Alvaro Martinez doesn’t have any pages which match his gorgeous two-page spread at the ballet earlier in this series, but everything is very solid, from appealing character renderings to kinetic and fun action sequences.

Some reviewers are noting confusion at this point in the series. Interestingly, for a weekly series, the writers are not afraid to jump around in the timeline, and leave some transitions to the imagination. However, some plot holes to present themselves, like how Damian, Tim, and Stephanie are able to resist the Ichthys signal without a visible trauma toxin mask. Another possible location of confusion is the way Harper wakes up in a bed after watching Mother launch the Ichthys signal in issue #22. However, given that it has been at least two hours at this point, Mother could have administered drugs to sedate both Cassandra and Harper while she prepared her Orphans for attack.

All in all, Orlando and Martinez provide another issue which doesn’t do much by itself, but will likely give a sense of scope and difficulty to the final battle when collected with the other issues.

Pick up/Pass? If you are a fan of some specific characters that get highlights in the issue, it’s a fun read, but in general, it doesn’t advance much from the last issue, so I recommend waiting for the trade.

In Conclusion: Though the overall narrative is merely moving pieces around on the board without victory or defeat, Orlando’s fun action and dialogue bump the rating a tiny bit up.