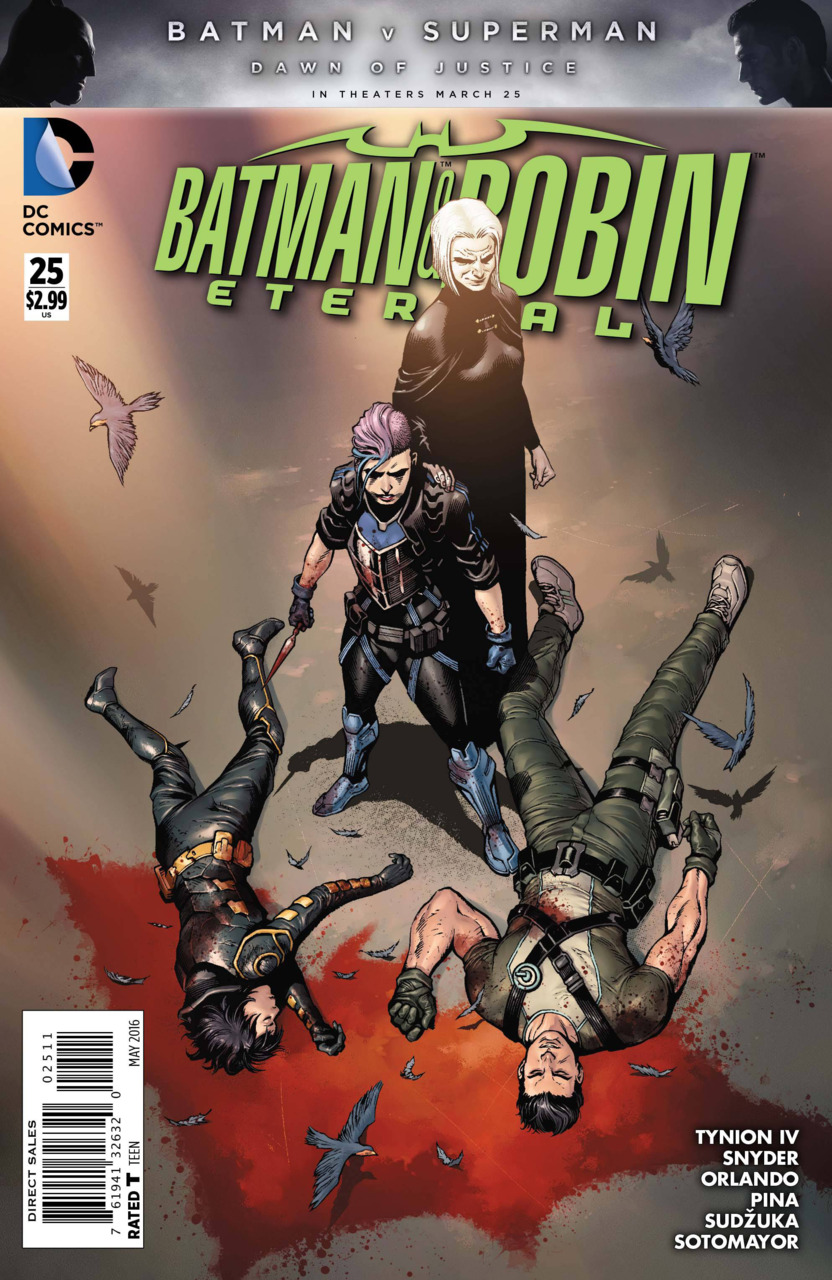 In Brief: The Bat-family holds the line against Mother’s technology and army of Orphan assassins.

Summary (Spoilers): As the Bat-family battles desperately against the hordes of Mother’s brainwashed children and her super assassin Orphans, Midnighter tells them that Scarecrow needs more time to finish the trauma toxin. Meanwhile, Dick Grayson fights Azrael, trying to convince him that exposing and punishing Mother is the right path, not murdering her. Azrael counters that Mother took his life, so taking hers is a good act, not a bad one. However, Dick tells him that killing is Mother’s weapon, and if Azrael truly wants to be free of Mother, he needs to be free of her methods as well. Finally willing to listen, Azrael asks Dick “how?”

Harper Row expresses horror at Mother’s invitation to kill Cassandra Cain. Mother explains that all she wants is perfection for Harper, and Cassandra is an imperfection, a failure that holds Harper back.

Stephanie Brown (Spoiler), covered in Mother’s children, thinks her way through the problem, sending a grapple through a door and yanking herself all the way to the top of Tokyo tower to destroy the receiver. The other 11 heroes follow suit, and Midnighter delivers 12 trauma toxin dispersal units through the doors. The gas acts as a shock to the children’s systems, breaking the pattern set in place by Mother’s signal, and restoring them to their senses.

Mother reacts to the Bat-family’s victory violently. She orders the satellites to use the secondary receivers, saying that Batman and those who follow him are trying to implement a short term solution, while her methods are forever. Dick breaks up her monologue, saying that saving the world is his job.

In Depth: Steve Orlando’s final issue proves to be a lot of fun, with classic Batman and Robin action and villain monologuing. Though his first two issues in the series were a bit disruptive in tone, forcing characters and violence into situations that didn’t fit what had gone before, his closing arc provides epic battles with character moments, as well as a James Bondian flair to Mother’s plan and style.

The final battle seems like it’s going to take about four issues total to wrap up. A battle this long seems kind of excessive (though not nearly as hardcore as the Wheel of Time series, which uses nearly an entire book of about 1000 pages to wrap up its final battle), though if you think of reading the story as a whole in trade paperback, having a twenty-six issue story wrap up in only one issue seems a bit too easy.

Orlando provides a nice villain monologue for Mother, propelling us into James Tynion’s finale issue next week. I said in one of my recent reviews that Mother is, like most of Batman’s villains, attempting to parallel Batman himself, but not quite as successfully as some of the more classic villains. Orlando goes some distance towards balancing that difference, tying together Mother’s previously demonstrated obsession with perfection with a classic villain trait of being unable to take responsibility for her own failures. She blames Cassandra for her own failure to create a perfect child because Cass would not become a murderous robot like her father. She also makes the criticism of Batman that his solution to the problem of evil and fear is temporary, and hers will be permanent. I look forward to Tynion making a statement representing Batman’s true philosophy in response to Mother’s utopian vision – but Genevieve Valentine already provided a glimpse of the response in issue #22 – that Batman refuses to create robots or soldiers who only obey. He wants to raise children – sons, daughters, brothers, and sisters – who become their own people who have their own way of fighting for right. Instead of controlling their minds, he gives them skills. Instead of killing them for failure, he catches them until they can stand on their own.

The focus on one villain, for all her weaknesses as a concept, also gives this series a bit of an advantage in the concluding chapters over the original Eternal series. Instead of constant reveals of characters who were only tangentially connected to the plot, and a final reveal of a character who makes no sense unless you’d read Scott Snyder’s run on Batman three years prior, Mother’s character is wholly contained within this series, so the reader feels like they understand her completely.

The art, by Javier Pina and Goran Sudzuka, is fine, but not terribly spectacular. It fits well with the style of Scot Eaton, one of the three artists solicited for the final issue, and the artist who has worked on the most issues for the series. Unfortunately, though Eaton’s work (and Pina and Sudzuka’s) is competent, it doesn’t stand out as especially appealing or distinctively good.  The cover, by Alvero Martinez, is nice, with a callback to Cassandra’s bloody bat mask in issue #13, but only previews three of the twenty page story – probably the result of the difference between the interior production and cover production schedules.

Pick up/Pass? We still recommend waiting for the trade unless you’ve been collecting all along, since this really doesn’t move too much forward, though it does represent a step forward for the Bat-family in the battle.

In Conclusion: As we go into the finale, the Bat-family achieves several steps forward, but Mother’s response promises dire retaliation.