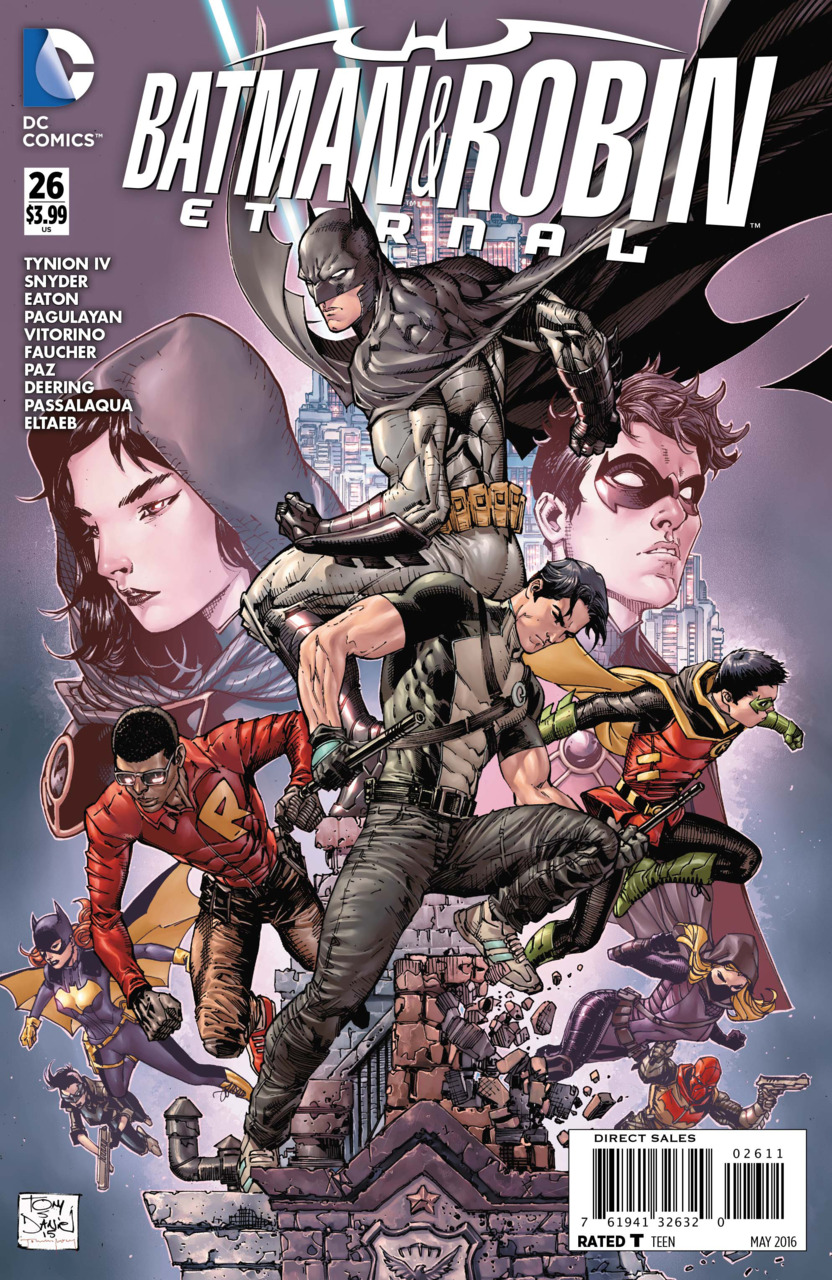 In Brief: As the Bat-Family converges on Mother’s Arctic hideout, Harper Row’s story comes to its climax, demonstrating the true meaning of Batman and Robin for all time.

Summary (Spoilers): For the first time since the battle with Mother began, we flash back to Harper’s childhood with her mother. Caught at her mother’s job at the bank, the two have a heart to heart about Miranda Row’s absence due to her two jobs, and Miranda assures Harper of her love and constant support for her children to be anything they want.

In the present, Mother and Dick Grayson vie for Harper’s allegiance. Cassandra Cain tells Harper to do it so she will feel better, but Harper assures her that there is no way she would ever hurt Cass, and was only allowing Mother to talk so she could plan the best way to take out the power system. Harper then proceeds to fight Mother, telling the villain that a real mother doesn’t shape her children, but helps them become their own best selves.

Mother responds by pulling a pistol and attempting to assassinate Harper, but Cass pushes Harper to the side and takes a glancing shot. Mother’s system is almost ready to relaunch her signal, but Dick has convinced Azrael to take out the broadcast antenna. Furious, Mother orders her Orphans to attack the trio of heroes in her lair, but with the jamming down, Dick calls the rest of the Bat-Family and allies through Midnighter’s teleportation doors. Harper and Cass embrace and prepare to face the assassins together, but Stephanie Brown as the Spoiler has brought some of Harper’s taser guns, and forms a trio with the other two.

Mother faces the four Robins (Dick, Jason Todd, Tim Drake, and Damian Wayne), again proclaiming that without her to shape their trauma, they are imperfect, but Dick counters that Batman didn’t mold them, but helped his partners to become better than he was – to grow and heal. Seeing her inability to win the current fight, Mother prepares to erase her base by activating the volcano underneath it and return in the future to destroy Batman’s family.

Before she can escape, Cassandra attacks. Dick and Harper fear she will kill Mother, but Cass declares she will never kill again. Before she can capture Mother, though, Orphan, David Cain, gravely injured, stabs Mother through the chest with a sword. Telling his daughter that she deserved better than what he and Mother gave her, he drags his Mother and himself into the lava of the volcano.

The Bat-Family escapes the ice fortress collapsing into the earth, saving those of Mother’s children they can. Harper, her brother Cullen, Stephanie, and Cassandra share a hug. The Robins plan to take care of the remnants of Mother’s plans.

One month later, Harper meets Batman (Bruce Wayne, back from his memory loss in Batman #50) at her mother’s grave to tell him she’s hanging up her Bluebird identity to go to college for a while. She confronts him over not telling her about his role in Miranda’s death and leaving her and Cullen alone. Batman tells her he wanted her to be free of his influence, and they come to a certain understanding. After Harper leaves, Cassandra comes out. Batman offers her the same path as Harper, but Cass chooses to help, taking the name Orphan.

Batman then finds Dick surveilling some robbers. Dick assures Batman that he isn’t Mother – that he trained and encouraged, rather than breaking and remaking. The other three Robins join the Dynamic Duo, and they leap to save the day again.

In Depth: James Tynion IV, the head writer for both Batman Eternal and Batman and Robin Eternal, concludes two years of stories in this issue. Does it live up to the 77 issues building up to it? Yes and no. The character work is there, as is the thematic exploration of what Batman and Robin mean, to each other and to readers. However, even though the finale to Batman Eternal had a huge number of artists contributing, most of them issue was handled by Eduardo Pansica, giving it a unifying feel of art, even though I still regret that Jason Fabok left Eternal to do Justice League and the editors didn’t make it a priority to get him back for even part of the issue. In almost identical circumstances this time around, Tony Daniel left this book to work on the upcoming twice-monthly Justice League title, and though he did provide the cover, the art team isn’t quite as solid as the first Eternal’s final grouping.

Scot Eaton, who has done real journeyman’s work for Batman and Robin Eternal, contributing pencils to seven issues of the twenty-six, provides the prologue and epilogue pages. Eaton’s character work is very competent, which is good, since he contributed more to the week-to-week “look” of the comic than promoted “lead artist” Daniel (who only drew three issues, as well as the eight page preview). However, he never rises above that competence into really good – there’s something awkward about his linework and poses that isn’t as elegant, distinctive, or energetic as some of the standout artists on this book, like Daniel, Marcio Takara, Alvaro Martinez, Roge Antonio, or Carlo Pagulayan. It’s nice that the art team managed to bring the long-term art consistency of Eaton to the book – something that the first Eternal’s finale really lacked, as the artists who worked on that book didn’t work at all on the early part of that series – but even a month ago, I hoped that Daniel would provide a bit more to the series ending to give it a sense of artistic completion and coherence.

Unfortunately, the main solicited artist for the issue, Carlo Pagulayan, ended up contributing no more than ten of the thirty-eight story pages. Pagulayan, who provided six really excellent covers for the series, knocks his first interior work for this installment out of the park. He has a real gift for detail and dark, moody action pieces – highlighting the hair and faces of his characters. However, the lion’s share of the book is drawn by Igor Vitorino, who is not as detailed or appealing as Pagulayan in his character drawing, leaving the last half of the climactic fight between the Robins and Mother feeling a bit off.  Geraldo Borges, frequent collaborator with Alvaro Martinez, provides two pages, both of them quite fun, making me wish they’d split duties a bit more between Vitorino and Borges if Pagulayan wasn’t available.

Gabe Eltaeb and Allen Passalaqua split coloring duties, with Eltaeb’s paler, colder style providing some nice contrasts to Passalaqua’s darker, more warm-toned hues.  All in all, though this issue does wrap together reasonably well in character design and action, it’s a bit disappointing that Daniel couldn’t provide even a couple of pages in the prologue or epilogue for continuity, or that Pagulayan didn’t have time to complete the main story pages alone.

Tony Daniel’s cover, while very nice, with a purple background and featuring nearly every character in the book, has a curious choice of focus – though Harper Row and Cassandra Cain provide the main character arcs in this issue, Dick Grayson is the central figure, and Harper particular is nearly the smallest figure on the cover. The date for the image is 2015, leading me to think that either DC editorial mandated certain things (Dick Grayson is marketable, thus must be in the middle, can’t spoil the main character of the story), or that the writer’s room hadn’t fully hashed out what would happen in the final issue when the cover was commissioned. (This last is partially likely, as the eight page preview showed Jason Todd swimming away from a sinking school bus, a scene that is never even hinted at in any issue of this series.)

Thematically, Tynion weaves together all the statements about Batman and Robin in the monologues from Harper Row, Mother, and Dick Grayson. Though I think Genevieve Valentine’s speech from Batman to Damian is a bit stronger – “My job is to catch you, until you decide for yourself” in issue #22 – Tynion’s restatement of the idea of Batman and Robin is well done. The choice of a villain who is focused on saving the world by breaking children to do her bidding was an inspired one for a series that focuses and celebrates Batman and Robin’s 75 year partnership. Even though some fans protested Harper Row’s central role in the series, the way Tynion used Harper’s mother to provide contrast to both Batman and Mother shows the amount of thought and passion this writing room has poured into their work. The reintroduction into the DC Universe of Cassandra Cain, a child who rejects the abuse of her father and his mistress in favor of helping people, only underlines this thematic unity, and her final scene with Batman gives a nice nod to her own publishing history, even if her choice of code name (Orphan) leaves something to be desired.

Fans of the two Eternal series will probably be looking forward to Tynion’s run on Detective Comics, which like the two weekly series features the Bat-Family rather than a solo character focus (Batman, Batwoman, Spoiler, Cassandra Cain, and Tim Drake, and many more promised), as well as art from Eddy Barrows and regular Eternal artist Alvaro Martinez.

Pick up/Pass? Though the inconsistency of the art does detract a bit from the power of the finale, the strength of the writing pushes this to a “Pick Up” recommendation.

In Conclusion: In taking us on a journey showing us the consequences of raising children to be weapons, Batman and Robin Eternal demonstrates the intense need for families which allow children to grow into their own identity. My individual rating is below, but as a for the series as a whole, I give four out of five batarangs.