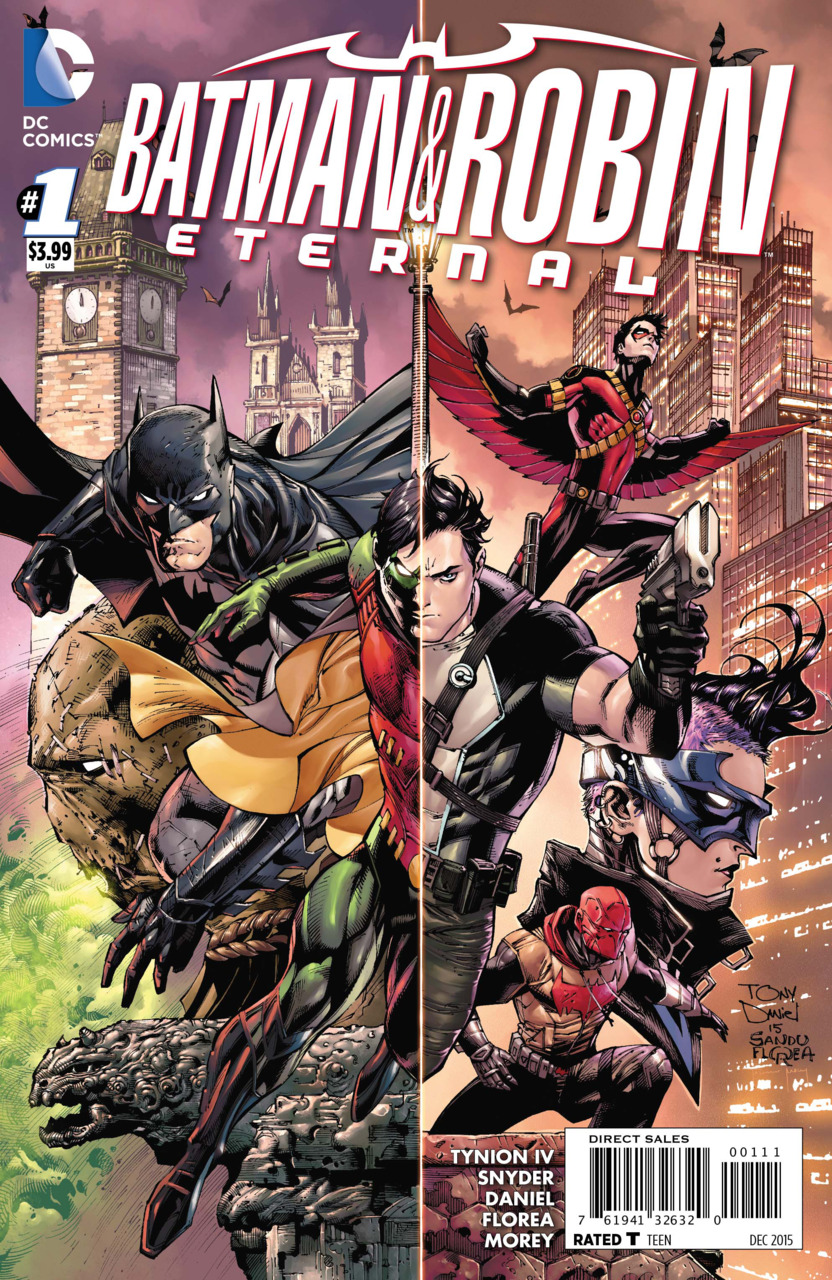 Dick Grayson, Harper Row, and the mysterious Cassandra Cain grapples with foes in the past and present as a mystery rises up around him, threatening to engulf the world in mind control and murder.

The story is framed by an incident several years ago in Cairo, in which a boy’s parents are gunned down in front of him by a hooded figure. Cutting jaggedly to the present, Dick Grayson remembers the thrill of being Robin as he chases a cyborg on a sci-fi motorcycle up a building’s exterior. Though currently a superspy for the shadowy organization Spyral, he recently reconnected with his caped roots, and has now called on Jason Todd, Red Hood, and Tim Drake, Red Robin, both also former partners of Batman, to take down the cyborg. They do so, and Dick reminisces briefly before swinging off on one of Tim’s grapples.

Meanwhile, the new Batman, James Gordon, is tracking down Harper Row. He finds her and tells her that he’s shutting down all other capes to prevent more children dying, but Harper immobilizes his suit and gets away. She tells Jim that she refuses to stop even though she never got the training from Batman she deserves, because of Batman’s disappearance at the conclusion of Joker’s endgame plan.

Having changed into civilian clothes, Dick falls into a trap at the opening of a tower connected to one of his first cases. In the past and the present, Dick faces young minions controlled by a mysterious super villain – Scarecrow in the past, the enigmatic Mother in the present. Even his handler, Poppy, appears to work for Mother, and Dick flees towards the Batcave to avoid the dreaded Orphan.

Before he reaches safety, however, a hooded girl knocks him off his bike. She proceeds to clean the ground with him easily, but Dick observes that she refuses to kill him, though she easily could. She hands him a Bat flashdrive, saying “Mother,” and vanishes.

Harper arrives at her appartment, only to be confronted by the Orphan, who says she must die because of her status as the key to Mother’s plans.

As Dick enters the flashdrive into the Bat computer, he sees a list of names of Mother’s children, including his own and almost all of Batman’s other partners, including Harper and the name Cassandra Cain. A recording of Batman plays, telling Dick that Batman failed, begging forgiveness and warning Dick not to underestimate Mother, who can control anyone, even those you love.

The issue ends back in the Cairo flashback, where the hooded gunmen reveals himself as Batman, holding the smoking weapon and telling Mother that everything is going according to plan.

Batman Eternal opened with Batman and Jim Gordon chasing Professor Pyg, and falling into the trap that would drive the entire year-long arc forward. This time around, we open with flashbacks to a young boy going through an event eerily similar to Bruce Wayne’s own childhood – the murder of his parents in front of him. The event even takes place next to what appears to be a theater, blending the parallels that much deeper.  This opening in the past sets the tone for the issue, and presumably the series, as having one foot in the past and one in the present.

The connections between past and present operate on nearly every page of the issue, with each character tying their actions to their history. Tim and Jason have reacted very differently to their partnership with Batman and his current amnesia – but both are excited to help Dick with his Spyral missions because of the bond that partnership has created.  The villains of the issue, all controlled by the shadowy Mother, have pasts that link them with Dick and Batman, though that link remains unclear for now. Harper and Jim tangle of the vacuum Batman’s absence leaves – she resenting the opportunity to be Batman’s partner, he trying to avoid the mistakes Bruce made in putting kids in the line of fire. And Cassandra Cain…well, she clearly knows both Batman and Mother, without quite seeming loyal to either one at present. Which, of course, leads us to the most anticipated moment of the issue: Cassandra Cain’s reveal. Fans of her original appearance and character skills should appreciate how easily she takes Dick down, and her nearly silent demeanor. Just as in her original incarnation, Cassandra views combat as communication, letting Dick know that she is not trying to kill him – and that she resists the abusive training of her upbringing, refusing to lapes into lethal force even though she easily could.  Tony Daniel’s costume design picks up the black with yellow piping coloring of her original suit, but goes for a more armored look than the leather jumpsuit of Batgirl. His illustration of her fighting also uses small circles indicating her control and intelligence in placing blows (see right).

The hood and armor look brings to mind the redesign of Stephanie Brown’s Spoiler outfit from the previous Eternal line, though the lack of a cape or mask, the yellow chevrons instead of purple ribbing, and various pads on joints render it distinct. It’s nice to see Daniel and the Eternal team chose to leave Cass’s face open, since her language issues occasionally made the full-facial coverage of her Batgirl suit an obstacle to connecting with her character.

Like Batman Eternal, this issue positions two figures as key to an as-yet-unrevealed plot. In season one, it was Stephanie Brown and her knowledge of her father’s plans and connection to a Bruce Wayne-like figure. Now, it’s Cassandra Cain and Harper Row. We must hope that the resolution of the plot is a bit more intentional on the part of our heroes than it was in season one.

A thrilling and exciting beginning to the second “season” of Eternal, focusing on Dick, Harper and Cassandra Cain, promising the same twists and action as the first season.