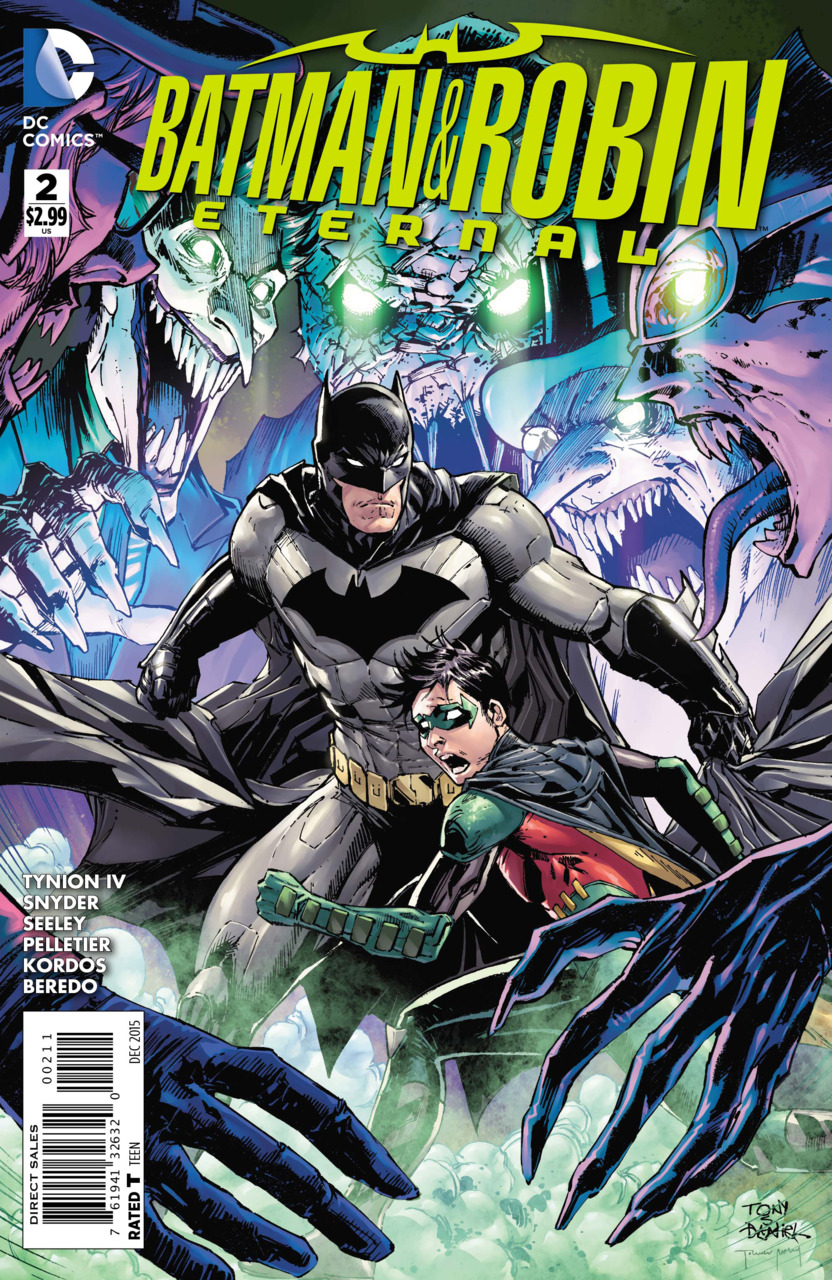 The issue opens with the Orphan about to kill Harper Row after beating her severely. However, Cassandra Cain bursts through the window into the Orphan’s back, and proceeds to beat him down. Dick Grayson, following the list of names on the Bat-drive from last issue, pulls up on his motorcycle outside of Harper’s apartment just as the Orphan goes flying out the window. He contacts Helena Bertinelli back at Spyral HQ, but when she has no information for him about Mother or Poppy’s betrayal last issue, he parkours up the fire escape, giving the just arriving Stephanie Brown an eyeful.

Cass has damaged Orphan’s respiration system, and as he billows gas, she knocks him onto the balcony of the fire escape. Harper, struggling, manages to taze the metal of the escape, causing him to fall. Dick, on his way up, catches the Orphan, but is distracted by Cass, and drops him. Cass and Dick communicate non-verbally, her chasing the Orphan, Dick continues to help Harper. Stephanie bursts in wearing her Spoiler costume to defend Harper, leading to an incredulous response by Dick. As Stephanie and Dick tend to Harper’s injuries, they smell the gas the Orphan left behind, which is the Scarecrow’s fear toxin.

Dick flashes back to his first confrontation with Scarecrow as Robin, in a cornfield with Batman. Scarecrow ambushes them with an aerosol can of the gas, leading to Dick hallucinating Batman and his villains all telling him he’s not good enough to be Batman’s partner. In the present, Dick learns Stephanie’s name, and is relieved that she’s not on the list from the Bat-drive. Tim Drake (Red Robin) enters, saying that he bugged the Row’s apartment and was alerted to the danger. Dick realizes that Jason Todd (Red Hood) was also on the list, and calls him to warn of the Orphan. Jason has already found Cass in a bar, and has his gun to her head!

This issue shifts from the heavy focus on the past to the present, with the fight between the Orphan, Cass, and Dick filling the first half of the story, and the aftermath of that fight (including the brief Scarecrow flashback) filling out the second half. It’s nice seeing Tony Daniel’s method of conveying Cass’s fighting style through outlined striking targets used again, though a bit inconsistently, since Daniel used circles, while Paul Pelletier uses rectangles.  Pelletier’s style shifts away from Daniel’s more Jim-Lee type aesthetic, with narrowed eyes and an appealing outline sketchiness, to a more rounded line style, similar to many of the artists who completed the last third of Batman Eternal, such as Eduardo Pansica or Fernando Blanco (the latter of whom will pencil an upcoming arc in this series).  Oddly enough, Daniel’s cover for the issue focuses on the Scarecrow flashback, which helps keep the focus on the interaction of the past and present, but doesn’t really reflect the bulk of the narrative this time round.

Seeley’s writing shows many of the trademarks that make his work on Grayson enjoyable, including an understanding of fan interaction with their favorite characters. Stephanie, as a new superhero in Gotham, functions as an audience stand-in throughout the issue, and Seeley evokes a lot of laughs from her lines like “Kiss me, sexy Batman,” and her introducing herself as “The Spoiler. Enemy of crime and people who don’t like purple.”  Seeley’s strong grasp of characterization also extends to Cassandra Cain, who is laser focused on defeating the Orphan despite his cruel taunting. She also has a brilliant moment of non-verbal communication with Dick as she passes him on the fire escape, using just her thumb and face to indicate the plan they must carry out.

Though it doesn’t have quite the brilliant energy and scope of the first issue (the fight scene is intense, but nothing like a motorcycle chase up a building, and there aren’t any twists like Poppy betraying Dick or a mob of children chasing the hero), this issue is a solid narrative continuation with a lot of humor and character notes to enjoy.

Issue two propels the present action forward, glances off the past storyline, and keeps strong threads of characterization and humor throughout.