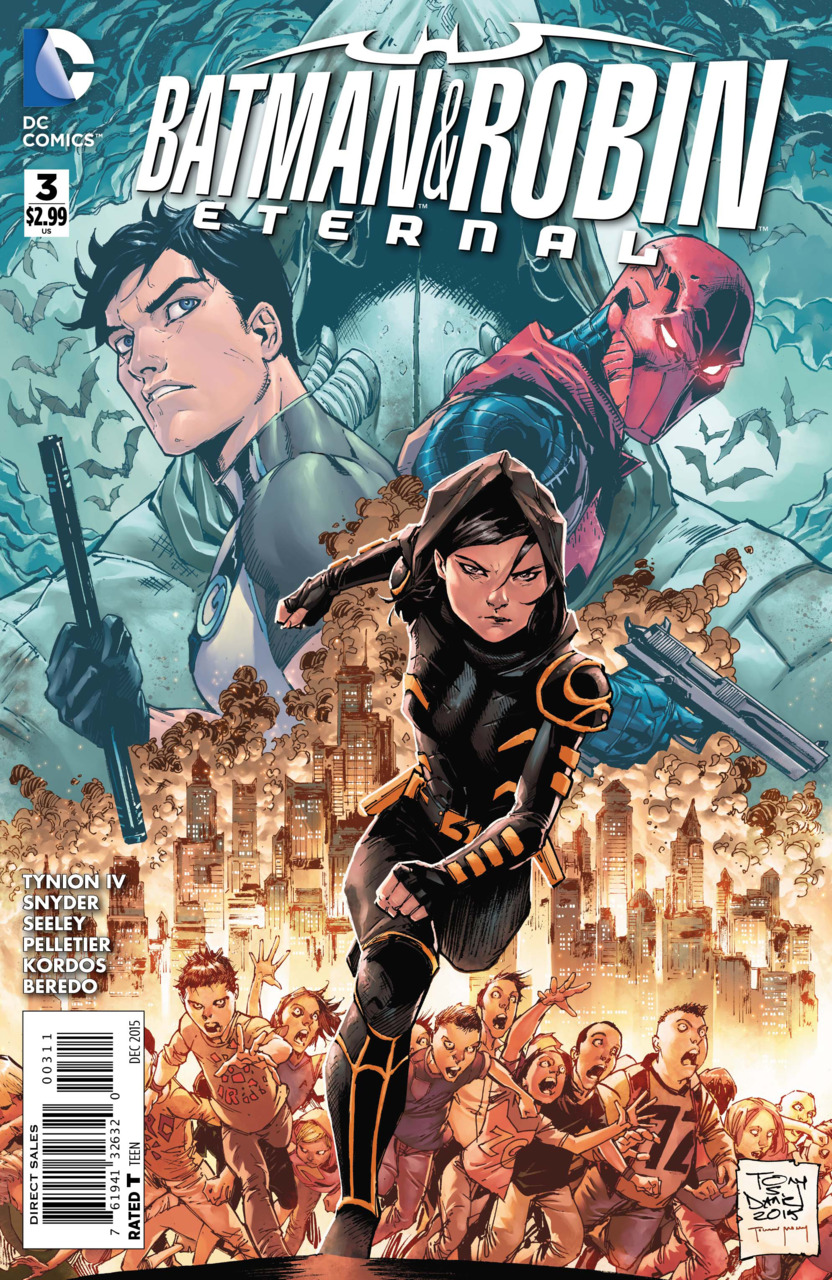 Dick Grayson, Jason Todd, and Tim Drake collaborate with Cassandra Cain and Helena Bertinelli to dig into the mystery of Mother, only to discover that her plan threatens a memory-wiped Bruce Wayne’s life.

Last issue, we ended with a full page splash of Jason Todd, the Red Hood, holding a gun to a kneeling Cassandra Cain’s head. This time, we pick up with a flashback to that panel, just as Cassandra kicks Jason into the jukebox of the sleazy bar setting. Jason responds with massive Japanese cyber armor forearm blade attacks, and apparently has Cassandra on the ropes when Dick Grayson stops the fight. Tim Drake (Red Robin), Harper Row (Bluebird), and Stephanie Brown (Spoiler) accompany Dick.

Intercut into the action at the bar is a page showing Poppy, Dick’s partner from the first issue, cleaning herself of the miniature spider robots Spyral places on all of their operatives, humming to herself about the plan that led her to join Spyral. She is pleased that she can now ditch her pretended allegiance to Spyral and work unhindered for Mother, and we see a few of the robots hide in her cell phone as she eats the others.

As Jason and Dick discuss Cass’s enemy or ally status (Jason downing a tankard of beer as they chat), Harper keels over from the injuries the Orphan inflicted, and Jason suggests they reconvene in the Batcave for medical and detective purposes. Harper is placed on a Bat-medical-gurney which begins stitching her back together as Stephanie watches over her. Dick plays the recording that Cassandra gave him in the first issue for them all, and then the three men attempt to talk to Cassandra. Dick realizes she doesn’t use verbal language, Jason wants to pummel her for information, and Tim attempts to give her candy, when she stands, and touches each of them in turn – Jason on the hand, Tim on the forehead, and Dick on his chest. She then walks to Harper and Stephanie’s side, as Helena Bertinelli, current operational head of Spyral, contacts Dick through his miniature robots.

Helena’s found information about Mother from 25 years ago – a record says that she’s a human trafficker who could possibly create a special-order human being. Jason implies that Batman might have similar goals as Mother, leading Dick to remember just after his first experience with Scarecrow’s fear gas. Batman rushed him to the cave and demands that Dick tell him what the gas did to him. Dick related his drug experience, concluding with his fear that he’s not good enough for Batman, then asks Bruce what he saw. Batman responds, “nothing,” and continues seeking a way to defeat Scarecrow.

In the present, Helena gives them more information on Poppy from the robots in her cell phone. They indicate that Poppy had several contacts with Beacon Tower, where Bruce Wayne is being thrown a “Welcome Back” party. Dick dashes off to save Bruce on his bike, as Cassandra mysteriously beckons Harper to explore the cave with her.

Meanwhile, at the party, the amnesiac Bruce is speaking with the chef as several women receive calls from Mother around him. The chef takes Bruce into the kitchen, where a huge number of party guests greet him with axes drawn.

This issue is much less of the feeling of an arc concluding as a piece of a continuing story, which matches what Tim Seeley has said in interviews about the writing process for this volume of Eternal. Unfortunately, that leads to a feeling of a bit of lost momentum. The fight at the beginning between Cass and Jason contains both humor and sharp action, but doesn’t contain the peril of the first two issues, where Dick had to run for his life from two sets of unexpected danger (the children and then Poppy), and Harper was beaten nearly to death by the Orphan. We know that Cass and Jason will eventually be allies (at least of a sort), so this meet-fight scene seems more like a filler action scene. Especially since the only really new information presented in this issue is what Helena delivers about Mother.

There are some very nice character interactions. Standout among these is Cassandra’s touching Jason, Tim, and Dick in turn:

Though Paul Pelletier’s art hasn’t had the energy or excitement of Tony Daniel’s opening art for the series, it’s been solid enough. This sequence is fun and touching in the way it highlights the strengths of each character and demonstrates Cass’s current methods of communication, but also a tad heavy handed and reductionistic. Pelletier’s draftsmanship is mostly strong, if sometimes showing the effects of haste in a weekly series, such as last issue’s blank-eyed Stephanie in the penultimate panel and this issue’s somewhat less memorable poses and facial expressions, in addition to the necessity of a fill-in artist for the last three pages (with noticeable character model changes).

Other moments of enjoyment this week were Stephanie’s meditations on Alfred’s role as “Bat butler. Batler,” and Jason’s mid-fight commentary on popular music and Japanese cyber-armor.  One of Seeley’s strengths as a writer, both in Grayson and this series, has clearly been the integration of humor into dialogue and situation. It will be very interesting to see writers who tend to take a more serious tone such as Genevieve Valentine handle the same characters and plot lines in a few weeks.

The issue has some solid interaction between Dick, Jason, Tim, and Cass, and provides intriguing setup, but doesn’t provide as many vital character moments or action beats as previously.