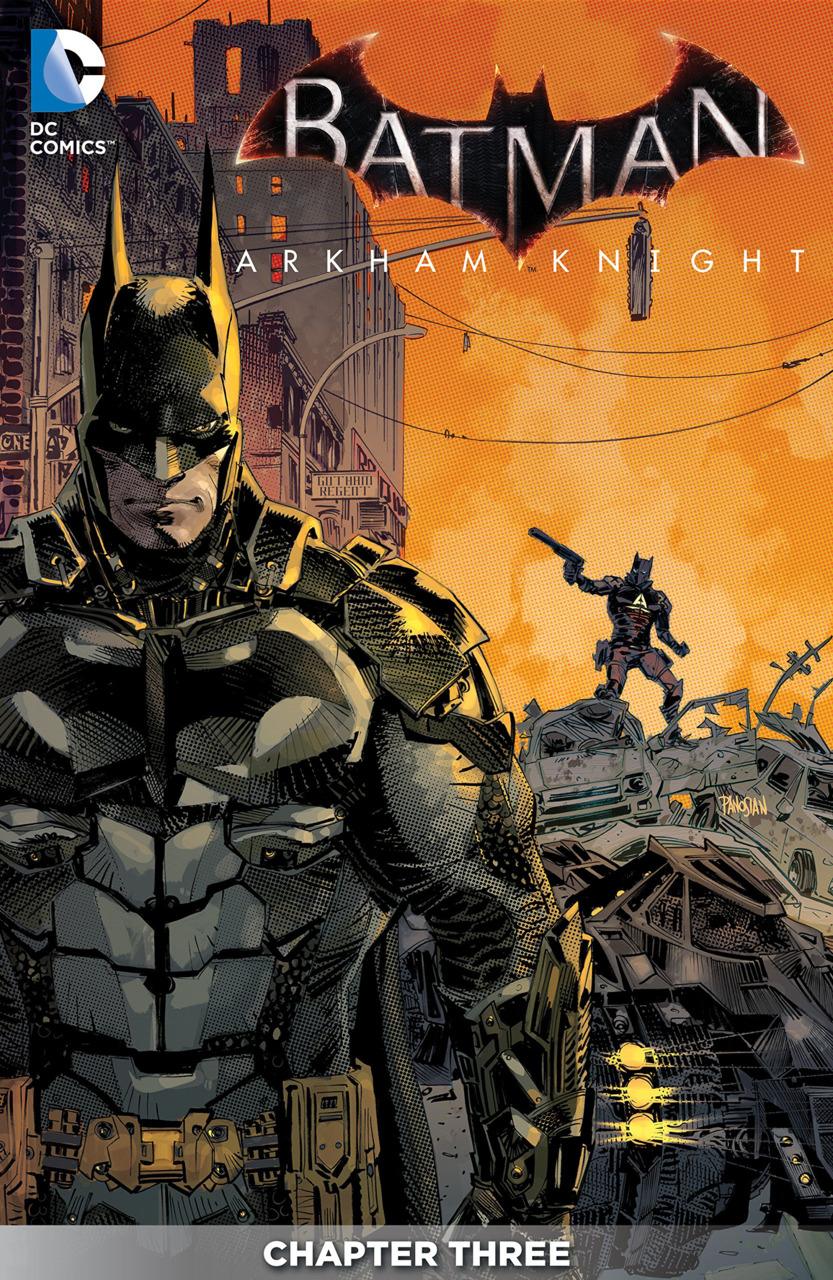 I was pretty down on chapter #2 of Arkham Knight last week. But fortunately the creators correct the course somewhat to create an issue that is uneven but ultimately a really enjoyable conclusion to the books first arc.

My biggest problem with chapter two was that it seemed to be lingering on the Joker instead of moving on and exploring new territory. Chapter three resolves this for the most part and it is done so in a way that feels hasty but appropriate to the tone of the Arkham games. In the last issue Batman had been lured by the Joker to Arkham Asylum to avoid the detonation of a series of bombs that the Joker claimed had been placed around Gotham. In classic Joker fashion this was a misdirect. Joker had actually had all of the bombs placed inside of Arkham Asylum because it would be the “perfect place for Batman to die.” Batman is unaware of this and he along with the rest of Arkham Asylum are blown up.

It’s actually pretty shocking to see the most iconic building in the game’s history destroyed so quickly. Does it seem anti-climactic? Sure. It seems like Peter Tomasi used this as a device to destroy the old Batmobile and get Batman in his new Batman: Arkham Knight suit. But for the most part I’m okay with it. The destruction of Arkham Asylum leads to the Arkham Knight, who has been stalking Batman, finding the Joker’s “Diary” in the ruins of the Arkham Asylum which will undoubtedly will be used against Batman.

We are also finally reintroduced to the Scarecrow, who has apparently been living underground. Nothing really shocking happens in this scene. We get a lot of Scarecrow talking to himself in a very cliche villainy way. Long story short, he’s going to kill Batman and make Gotham pay. The character model of the Scarecrow looks great, sure it looks scarier in the game trailers and screens that we have seen but Viktor Bogdonavic does a good job of pacing the Scarecrow’s reveal.

The highlight of the issue though is the final scene between Batman and Jim Gordon. It puts a period at the end of the Joker’s missing corpse storyline and it pretty satisfying. Bogdonavic again paces this scene in a way that makes sure that every dramatic beat is hit perfectly.

Arkham Knight chapter #3 is a considerable step up in quality from the last issue and while I still can’t recommend that you pick up the comic on a weekly basis digitally I can recommend that you consider picking it up when it’s first three issues are collected in one print issue this Wednesday. It’s uneven but for fans of the Arkham series it is definitely worth a look.