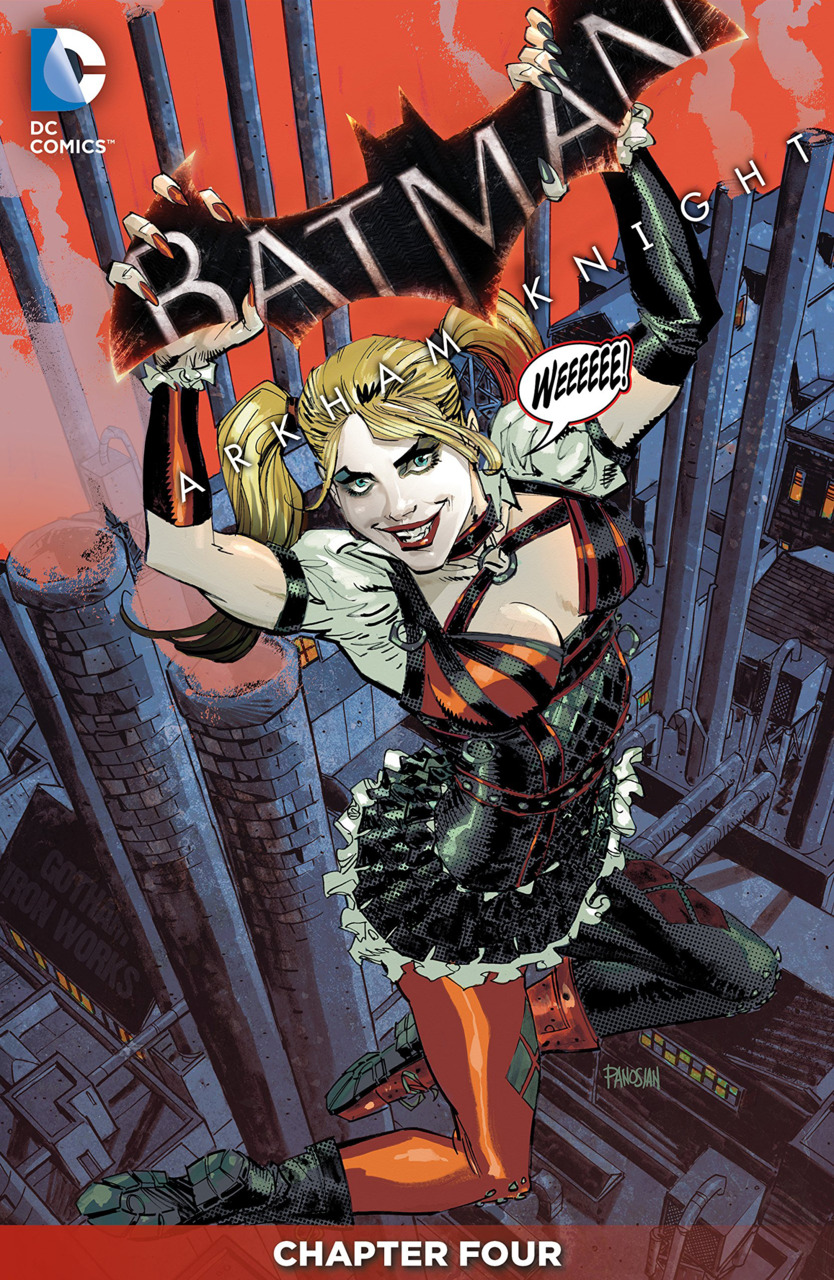 Oh Arkham Knight just when I think that you’re ready to move forward you fool me and take a step back.Chapter four doesn’t move the plot forward in any significant way until the very end but instead you get another issue completely dedicated to the Joker.

Chapter four deals almost exclusively with the “Last Will and Testament of the Joker” recording found on the Joker’s body in the last issue. The Joker tells his “Secret Origin” which is really just a bunch of nods and while I am disappointed that we have another chapter focussing on the Joker instead of moving on to the Arkham Knight, or Scarecrow, or even Harley Quinn (who graces the cover of this issue) it is still largely an ok issue even if it’s just more of the same.

What Tomasi has done a good job of connecting the plots of the three previous games together while also acknowledging the several tie-in comics that came between them, including the unreadable Arkham Unhinged, which convoluted the Arkham storyline so much I completely ousted it from my mind. Also, fans of the Arkham games who have been largely dismissive of 2013’s Batman Arkham Origins because the game was not developed by Rocksteady Games, are forced to accept the events that game as canon and proves this series is better for it. The best moments in this issue are the direct nods to the events of Arkham Origins and it retells that story in a way that hits the some major plot points of that game without being overly spoilery.

What doesn’t necessarily work  is Tomasi’s lazy use of pop culture references in this issue. In the Arkham City game the Joker makes a broad reference to the series finale of the television show Lost. Tomasi has taken that one line and has turned the Joker into some sort of pop culture junkie. In this issue he comments on reality shows and Malcolm Gladwell’s book Outliers. I think this supposed to be funny but all of it just comes off as really ridiculous.

Oh and the ending of the book. This would be pretty pretty shocking if you’ve never read a Batman comic before but if you’re reading Scott Snyder’s Batman you saw something almost exactly the same a couple of months ago. It’s a bit of a bummer to watch a gifted writer like Tomasi miss such a serious dramatic beat like this.

At this point in the story I don’t want to see the Joker anymore. Like the Joker says in this issue he isn’t in Gotham, or the Big G as he calls it early on (eye roll), in mind or body but he is there in spirit. That’s how this book should be. Aftermath of the Joker’s death and how it affects the characters is more interesting to me. How will the Joker’s death motivate Harley? How has the Joker’s death affected Batman? We haven’t really even started answering any of these questions and I can’t help but think that this is where Tomasi’s writing would shine the most. He excels at character work. Hopefully we can see more of it in the coming issues.