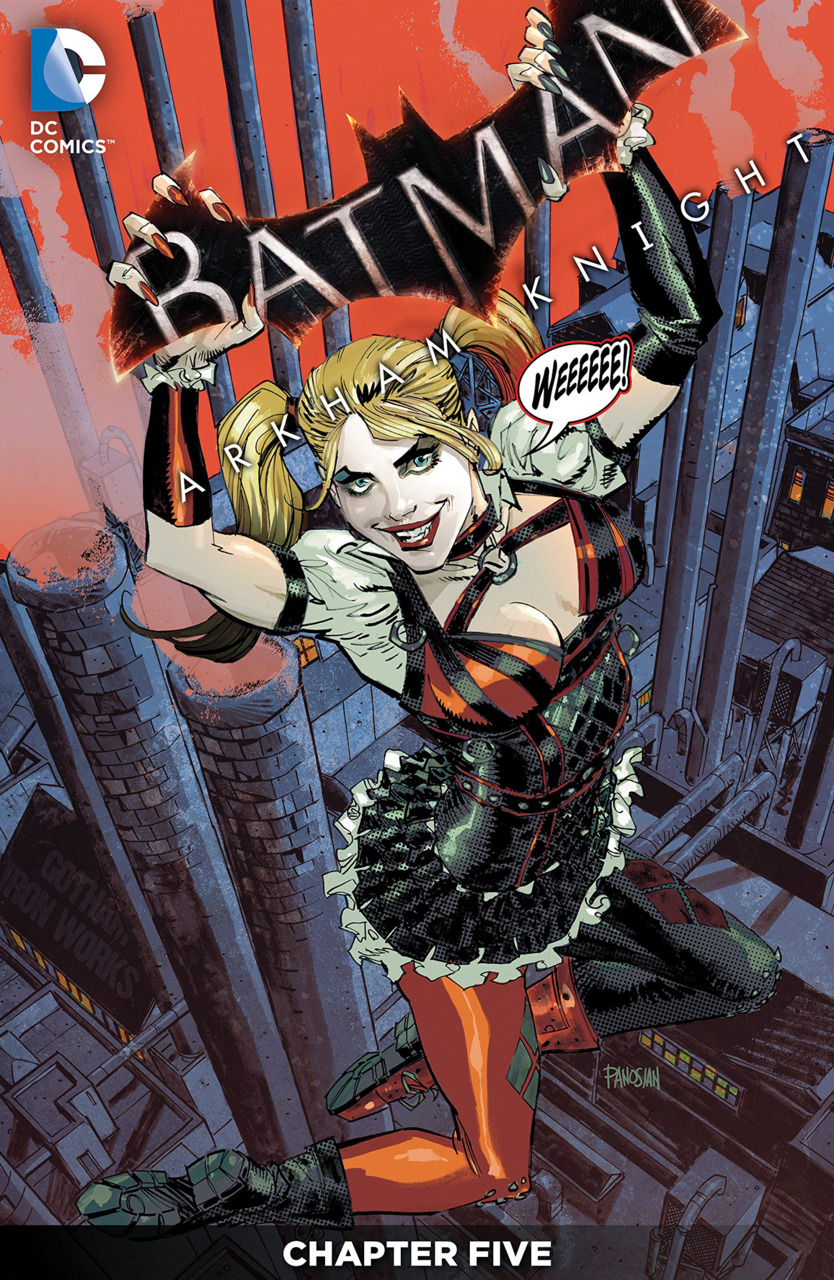 It can be argued, pretty convincingly, that the third most important character in the Arkham video game series is Harley Quinn (after Batman and the Joker obviously) and while she has been a major figure in all of those games her characterization in the series has left something to be desired. In the latest chapter of Batman: Arkham Knight writer Peter Tomasi takes the first steps in fleshing out the Arkham series Harley Quinn in the midst of a cliched Batman story.

The previous chapter of Batman: Arkham Knight left us hanging on the very familiar thread of Jim Gordon being infected with Joker toxin. We pick up in chapter five with Batman racing to find a cure for Gordon. This leads him to breaking the Joker’s closest ally and main squeeze Harley out of Blackgate Prison. You read that right. Batman breaks Harley Quinn out of jail.  I understand that time is crucial in the Arkham universe but Batman literally blows a hole in Harley’s jail cell.  It’s one of the lazy details that has plagued the series’s first four chapters and it continues to be disappointing because this is a book coming from Peter Tomasi who other than Scott Snyder has had the most consistent run with Batman, in terms of quality, since the launch of the New 52.

Batman then takes Harley to the Industrial District of Gotham City, where the Joker set up shop in Arkham City. Batman trying to appeal to Harley’s humanity and attempts to get her reveal where the Joker kept the cure to his toxin. Harley agrees to assist and reveals to Batman that the cure is in the sub-basement. Batman leaves Harley Quinn tied up and descends into the basement of the Joker’s Arkham City lair where he finds the antidote as well as another unforeseen obstacle that Harley conveniently and purposely left out.

The most successful aspect of this issue is the interaction between Batman and Harley. Tomasi takes a page out of “Harlequinade” and explores the complex relationship of these two characters. Batman, a character not known for his nuanced takes on rehabilitation in the criminal justice system, sees a lot of good in Harley and for some reason against his better judgement believes in her and while we know that Harley really can’t be trusted and that Batman’s trust in her will ultimately lead to him being stabbed in the back all while we still kind of root for her.

Tomasi’s characterization of Harley seems to help bridge the gap between the character that became a runaway success in Batman: The Animated Series and the version of Harley that Rocksteady has given us. And now that the Joker is dead and Harley is on her own, Tomasi has been given a very unique opportunity to explore aspects of the character that we haven’t really been able to see in any medium. If Tomasi can deliver it can be a game changer. Here’s hoping.