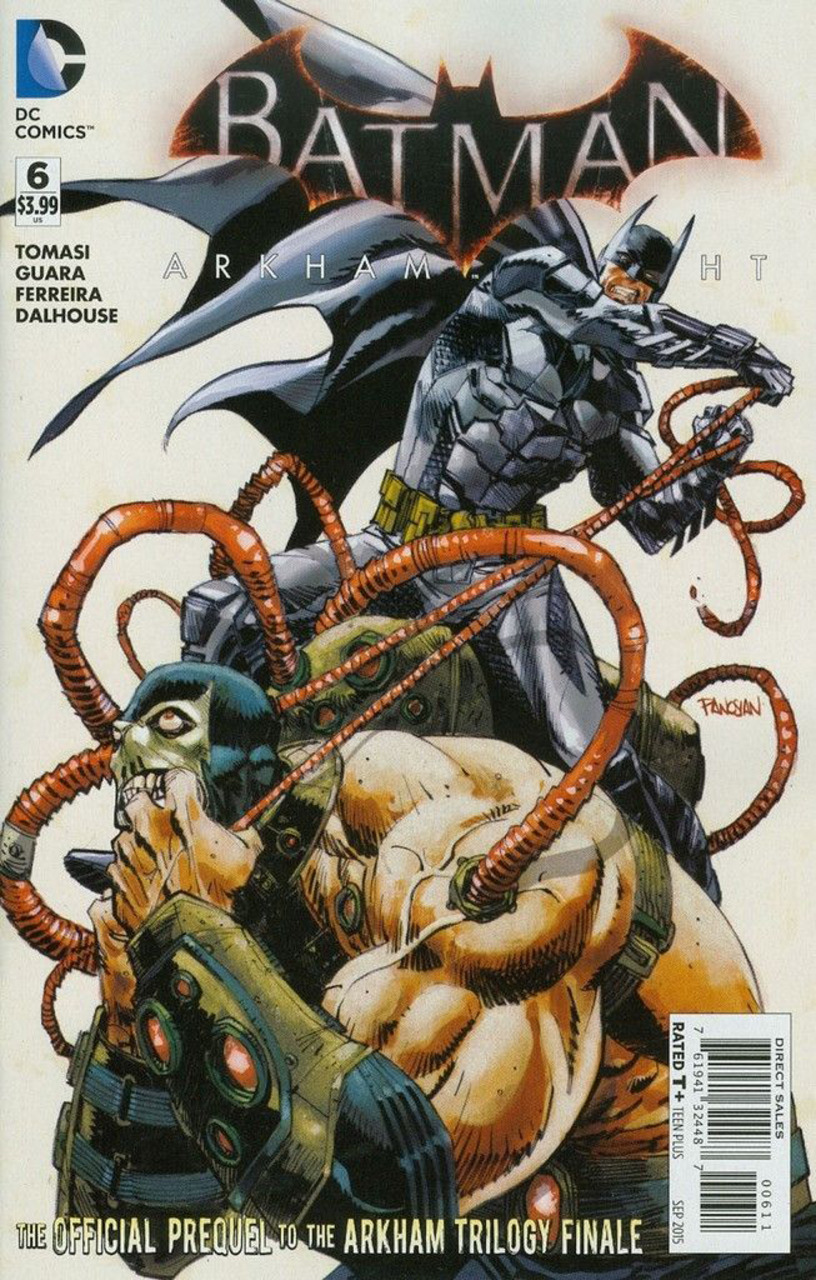 As our issue opens, we flashback to the times of a young Bane growing up in the prison environment of Santa Prisca. Twenty-five years before the present, we see a priest telling Bane that he will be serving out his father’s sentence; he leaves as the guards begin to beat the young boy. Five years later, Bane has grow a bit and managed to beat the guards…he talks to the priest about a recurring dream that involves Gotham City. The priest tells him that Gotham was founded by their ancestors and is rightfully theirs. As young Bane kills one of the guards, he tells the priest that he believes it is his destiny to reclaim Gotham.

Back in the present, we are back in mid battle between Batman and Bane. However, Bane is quickly restrained by many plants that are being controlled by Poison Ivy. Bane demands to know why Ivy is saving Batman and she responds that it isn’t his place to kill the Bat. As Ivy knocks out Batman with her toxins, she wonders who she can sell Batman to for a profit. With her back turned, Bane suddenly breaks free and attacks Ivy who fights back with her plants…unknown to them both, the Arkham Knight arrives and cuts Batman free of Ivy’s vines and drags him away. As the Knight talks to the unconscious Batman about taking his revenge on him, Bane and Ivy continue to fight. The Knight then downloads some information onto Batman’s cryptographic sequencer in order to give him a push in the right direction. Tossing Batman back into the battle, Bane turns his attention back on the Dark Knight who regains consciousness.

With a mighty explosion set off by the Arkham Knight, Bane, Batman and Poison Ivy tumble below ground. The fight continues as Bane attacks Batman with an extreme fury. As Ivy begins to recover, she awakens her plants that again launch themselves at Bane and spray him with a toxin. Batman quickly capitalizes on Bane’s distraction and knocks him down. As Ivy flees, Batman wonders why she would save him…twice no less. Bringing his attention back to his fallen foe, Batman realizes that Bane is gone.

We then cut across the city to GCPD headquarters where Gordon is busy handing out orders regarding the explosions at Arkham Asylum and the fire at Blackgate. We then see that Harley Quinn has a mole within the GCPD that is reporting on the Commissioner’s movements.

Back in the sewers, Batman continues following Bane’s trail…which leads him into an ambush. Held at gunpoint, Batman uses an electrifying gadget to gain the upper hand on his captors. The Dark Knight works his way around the room and takes out the henchmen before focusing in on Bane. The battle grows extremely violent with Bane sacrificing several of his henchmen in order to attack Batman…it eventually ends when Bane launches an ally strapped with several grenades and fires on him. As Batman flies from the site, a massive explosion engulfs the entire area. The issue closes with the Arkham Knight arriving at the wreckage and finding Bane…still alive.

What an issue! Although basically one gigantic fight, I have to give major credit to the artist…this was truly an amazing story to look at. The fights were visually amazing and the layouts kept the flow going throughout the entire story.

I really enjoyed seeing the Bane back story in this issue, although it’s something that I have seen before, it’s always interesting to see a different viewpoint or different take on a story…and the Arkham series does an excellent job with twisting known stories in a different, and yet interesting, way.

With the release of “Batman: Arkham Knight” the knowledge of who the Knight is definitely adds some depth to the role that he plays within the comic. I won’t spoil it here (for those who haven’t played) but I can definitely understand the Knight’s hatred towards Batman and his choice for killing off the villains that Batman has taken down. I’m still a little concerned for Bane however…his absence in the game does lead me to believe that the Knight might end up taking him out as well.

If you’re a fan of the Arkham series in general, this comics helps to expand that universe and is a must read.