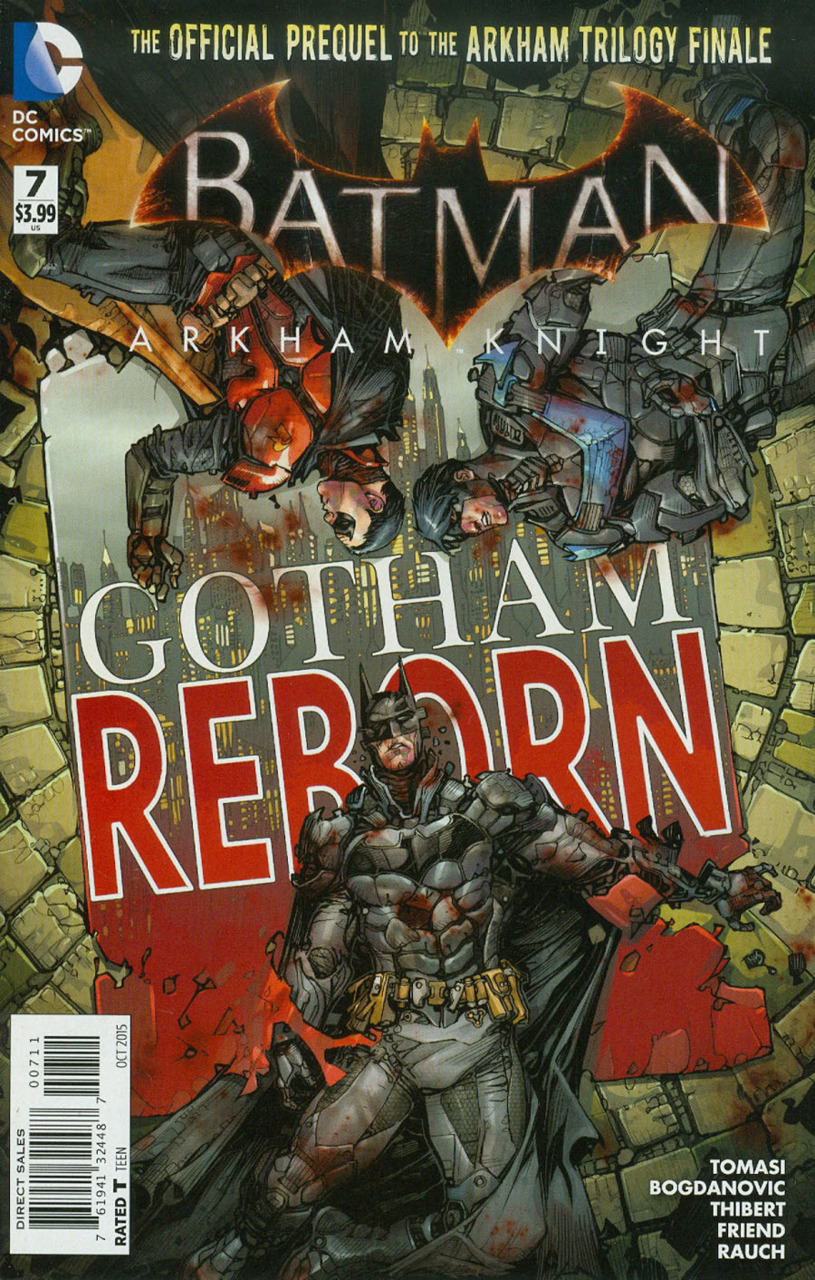 As our issue opens, a man is looking for food in some garbage cans inside the former Arkham City. Upon opening a dumpster, the man uncovers the unconscious and bloody form of Batman…somehow having survived the explosion at the end of the previous issue. Hauling the Dark Knight out of the dumpster, the man drags Batman back to his home. Sometime later, Batman is now awake and being spoon fed soup by his rescuer. The man identifies himself as Archie Freedman and Batman thanks him for his hospitality. Wondering what had happened to Bane, Archie states that he only found Batman in the dumpster and no one else. Picking up a photo, Batman asks who the woman in the picture is, and Archie talks about how his wife and he had taken that outside the Monarch Theatre…flashing back to his parents death, Batman comments that he knows the place.

On the verge of leaving, a sudden rapping noise catches Batman’s attention. Stating that some thugs have come to collect his “taxes,” Batman is put beneath the floorboards in order to not start a fight. As the door is kicked in, two large men enter the room and begin intimidating Archie. Crashing up through the boards, Batman attacks the two and threatens them to never return. Toasting his wife, Archie and Batman share a cup of coffee before he leaves.

Opening up on the first part of “Who Wants to Kill a Billionaire?” an armored truck makes its way down Infantino Parkway under police escort. As a boomerang flies out into the night, the accompanying helicopter explodes into a ball of fire. Crashing onto the road, the truck comes to a stop and a pair of wrist mounted guns blow the lock off the doors. Revealing the shackled form of Killer Croc, Captain Boomerang and Deadshot welcome Croc to the “All-New Suicide Squad.”

Over at the Gordon Residence, Bruce is meeting with the Commissioner and discussing his potential prospects as a mayoral candidate. Being quizzed by his daughter, Tim Drake and Bruce, Gordon is preparing for an upcoming debate. As they leave, Bruce and Tim meet up with Alfred and quickly change into costume as Batman and Robin in the backseat. Grappling off into the night, Alfred wishes his masters a good night as he speeds off home. In the distance, a hooded Arkham Knight can be seen watching the Dynamic Duo.

As we cut across Gotham again, Boomerang, Croc and Deadshot meet up with Harley Quinn and they dive into the sewers in order to meet their new employer. Arriving inside Wonder City, the crew is met by the pudgy Penguin.

The next morning, Alfred enters the master bedroom with a trolley laid with food…only to find the bed empty. Looking up, it is discovered that Bruce is busy doing upside-down push-ups (or pull-ups) with a weight tide to his back. Noting how ridiculous Bruce looks, he quickly flips to the ground and grabs a bite to eat.

As Bruce departs for the day, he bids goodbye to his gardner. Turning around, the man goes to a storage unit and opens the door find the Arkham Knight inside. Passing over his keys, the man runs off down the drive.

Back in Gotham, the New Suicide Squad appears to be watching their new target – none other than billionaire Bruce Wayne. The Squad continues to watch as Alfred arrives to bring Bruce home from a construction site, and the villains spring into action. Dropping down onto the road, the Squad attacks Wayne’s car forcing it to stop. The issue closes as the window rolls down to reveal Batman, and he exits the vehicle and knocks Harley to the ground.

Well, I continue to enjoy this series…the world of the Arkham games is probably my favorite and I love to see how characters and locations are pulled from the comics into the video game universe.

First up we have a short aftermath story that sees Batman helping out an ordinary, down on his luck, citizen of Gotham City. After fending off some truly bad people, we get to see how the actions during the games have affected Gotham’s citizens.

Next up, we bring a facet that has been hinted at and talked about slightly in the Arkham-verse…the Suicide Squad, or as Boomerang puts “The New Suicide Squad.” I think that may be a little on the nose in reference to the current series of the same name…but I’ll forgive it. Not only do we see the classic members like Boomerang and Deadshot, but we also pull in a new staple in Harley Quinn and tie in a constant Arkham character in Killer Croc…maybe we’ll get to see what Croc is up to during the events of the “Arkham Knight” game as he did not appear at all?

As the title suggests, we get to a bit of the Arkham Knight himself, slowly watching events and crafting his scheme…in this issue, he sets up surveillance on Wayne Manor in order to monitor Bruce/Batman’s every movement.

Although not as strong as previous issues, I did like this story because it introduced some new characters into the Arkham story, however I do have to question how Batman is going to explain his sudden appearance in the back of Bruce Wayne’s car.