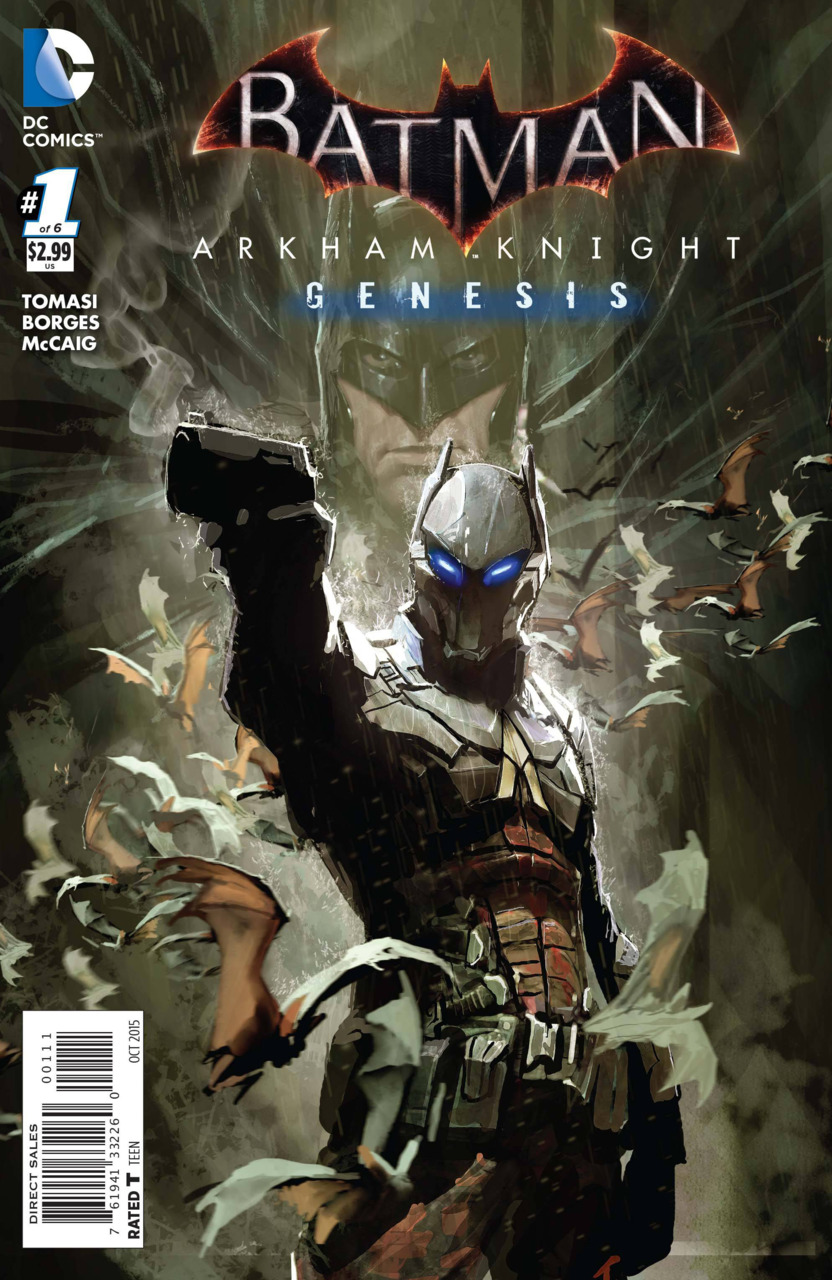 As the issue opens, a torrent of rats are attacking what looks to be a bandaged Bruce Wayne…however, it is soon revealed to be none other than the skilled surgeon Thomas Elliott aka Hush. Having killed several people during the course of “Batman: Arkham City,” Elliott was known as the Identity Thief having cut off his victims faces and used their parts to fashion himself a face that resembled billionaire Bruce Wayne.

Attacked by the Ratcatcher, who believes him to be Wayne, Hush is eventually rescued by the Arkham Knight who attacks Ratcatcher and electrocutes him to death. Hush thanks the Knight for rescuing him, but the Knight accosts him for being overconfident with his new face…something he needs to keep under wraps until his plan is enacted. As the villains depart, Batman arrives on the scene to find the charred corpse of the Ratcatcher surrounded by his former minions.

Arriving on a rooftop, the Arkham Knight and Hush enter a secret hideout and Elliott begins to re-bandage his face. Removing his helmet to speak, the Knight reveals himself to be…Jason Todd. We then cut to a series of flashbacks where we see Jason’s background…more specifically his birth and upbringing. Born to Willis and Catherine Todd, Jason was originally conceived in an attempt by Willis to pay off a major debt to Carmine Falcone, one which was not appreciated. Sent back with a newborn baby that he neither wanted or cared about, Jason eventually grew up and took to the streets…eventually making a deal with Sal Maroni for a section of Gotham known as Hapling Hills, in exchange Todd handed over his parents who were killed. Becoming a thief and somewhat protector of his area, Todd eventually ran across a battle between Joker and Batman. Using a mech suit loaded with machine guns, Joker attempts to kill the Dark Knight…however, Jason uses his agility and a borrowed grapple gun from Batman to take down the Clown Prince of Crime. Pulling a gun, Jason goes to kill the Joker but Batman quickly knocks the pistol with a well placed batarang. Handing over the Joker and Jason to Commissioner Gordon, Todd is placed within a Wayne Industries program for wayward children. Choosing to start fresh, Jason excels in his studies and athletics and even gets to meet his benefactor – Bruce Wayne.

Studying one night, Batman startles Jason in his dorm room and presents him with a Robin costume and states that this will be a one night try out. Swinging through the rooftops alongside Batman, a new Robin debuts within the streets of Gotham City. Cutting back to the present, Jason finishes fixing up Hush as he tells him that he has used a special compound that he created from Clayface’s remains…something that will heal the scars on his face incredibly fast. The issue ends with the Arkham Knight donning his helmet and thinking how Batman severely underestimated him.

As a first issue this one seemed to flow pretty well. Although the “big reveal” of Jason Todd is now second nature to me (having played Arkham Knight twice through now), this was basically a story that focused on Jason Todd’s origins within the Arkham Universe.

Starting our story off, we get to see the Ratcatcher return to the Arkham-verse even though he was believed killed by the Penguin…something Ratcatcher even mentions during the story. Ratcatcher has previously only been seen within the comics, specifically in the Arkham Origins digital comic and as a part of an Arkham City story in the second game. I liked Ratcatcher’s design here, really flowed with the other villains in the series. Finally we get to see his fate…another gruesome death attributed to the Arkham Knight.

The main course of this issue focuses on Jason Todd’s origin which has been altered to suit this universe. Born to Willis and Catherine Todd, Jason was originally born to pay a debt to Carmine Falcone…what a way to enter the world. Eventually, Todd grows up on the streets and becomes an agile thief and turns over his parents to Maroni. Originally caught stealing the tires off the batmobile (at least in the Post Crisis origin), Jason’s origin has changed by leaps and bounds here…turning from an orphan who was forced to improvise to a cold blooded thief who hands over his own parents to be executed. I did like how Jason legitimately used his new start at the boarding school. In the comics, Jason continued to try to return to the streets but I liked that we saw a good side to the morally grey Jason Todd.

Overall this was a rather simple story that filled in some minor plot points – specifically how Hush’s scars were virtually non-existent in the game and how Jason got his start on being Robin. I am looking forward to seeing how Jason’s career continued and how his capture and torture by Joker lead him into becoming the Arkham Knight.