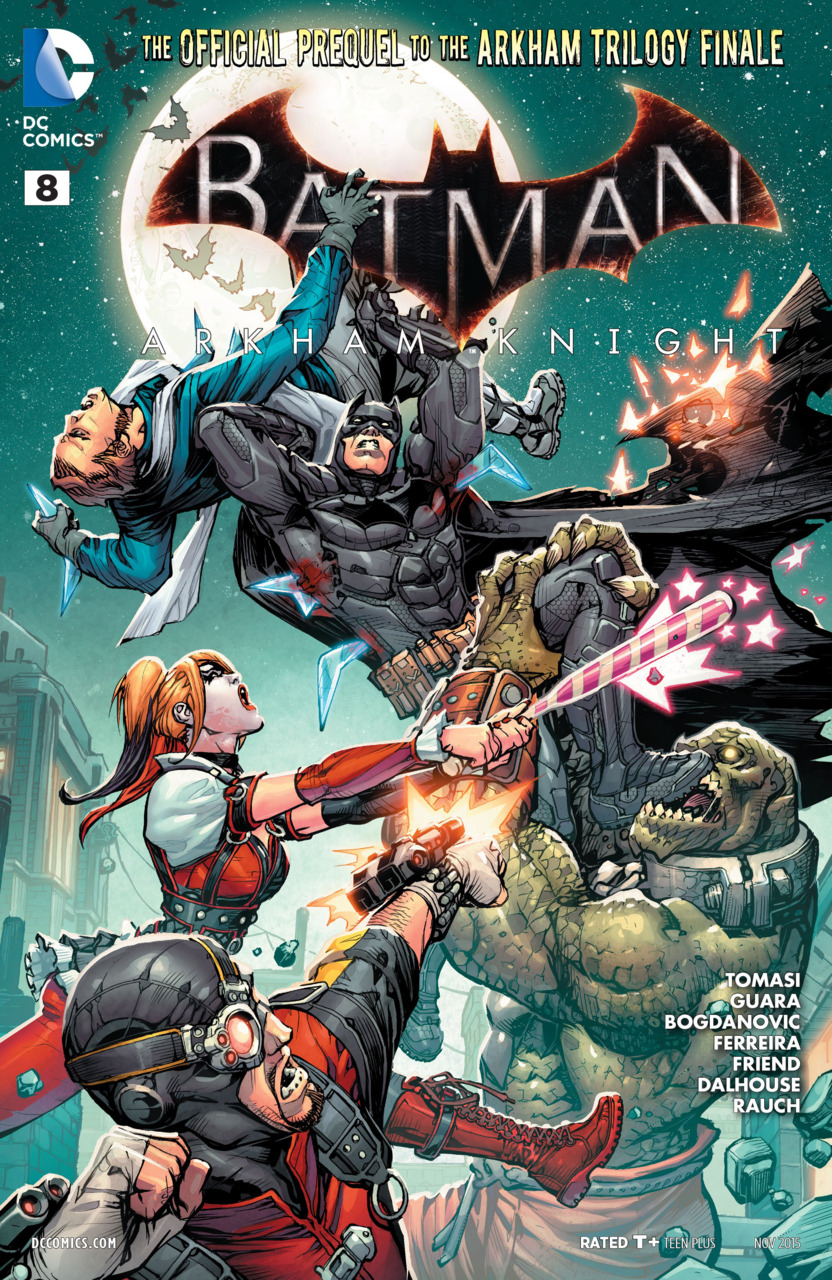 Picking up where our previous issue left off, Batman is busy battling against the New Suicide Squad as Deadshot, Harley Quinn and Captain Boomerang attempt to kidnap Bruce Wayne. As Deadshot rushes to the car and opens the door, he finds a panicked and tied up Alfred who yells about how Batman tied him up and threw Bruce Wayne from the car, stating how he was being watched and Alfred was the bait. Batman then swoops in and smashes Deadshot’s head through the car windshield. Praising his friend on the masterful acting and improvisation, Batman then turns his attentions on Harley and Boomerang. Pulling a gun and shooting him in the chest, Harley succeeds in dropping Batman…coming up to deliver a finishing blow, Batman grabs Quinn as she realizes the Kevlar protecting his suit.

As Deadshot regains consciousness, the Dark Knight continues to battle, tossing batarangs into Boomerang and hurling Quinn straight at Deadshot. Realizing their loss, Harley takes to the air and escapes, informing Penguin that they will have to initiate “Plan B.” As the Captain unfurls several explosive boomerangs, Batman is knocked off his feet…only to see Boomerang take a bullet through the forehead. As Batman rises, Deadshot explains that he is secretly working with Amanda Waller in order to figure out what the Penguin has been planning since the closure of Arkham City…however he suddenly knocked flying as the manhole at his feet opens suddenly – Killer Croc has arrived.

Back at Taskforce X HQ, Waller is cursing Deadshot for bringing the Batman into their situation. She begins yelling at Deadshot for screwing up the mission. Back in Gotham, Killer Croc launches himself at Batman who is sent flying when Croc hurls Deadshot at him. Cutting across the city to the Gotham Public Library, Commissioner Gordon is seen greeting several high profile citizens of Gotham as he receives the call in regards to the battle. Immediately jumping into police mode, he apologizes to Barbara and asks her to deliver his speech. Jumping into a car, Gordon begins barking out orders and races off to the scene.

Back in an alley, Alfred is busy trying to contact Nightwing in order to gain assistance for Bruce…stating that he would rather have Alfred rescued first, the butler comments that he spends more time with Batman’s toys than the Dark Knight. Grabbing a ladder, Alfred ascends into a waiting Batwing above him. Back at the battle, Croc is shot several times by Deadshot…none of which seems to do anything. We also see Harley Quinn returning to the Iceberg Lounge and informing Penguin of their failure in capturing Wayne. Penguin however states that he’s already released Croc and hopefully he will do what Harley failed to. Penguin also states that kidnapping Wayne was only a test for what he needed the Squad for…his other goal is gaining some valuable from Stagg Industries.

The battle rages between Killer Croc, Deadshot and the Batman…beating Croc with a massive pole, Deadshot tells the Dark Knight to lead Croc to the open manhole cover. Racing after his prey, Deadshot hurls an explosive boomerang at Croc, knocking him into the sewers below. As Batman attempts to arrest Lawton, Deadshot communicates with Waller and decides to continue with part two of the plan. As the two agree to work together to uncover Penguin’s goal, Deadshot welcomes Batman to the Suicide Squad…and he responds by punching Lawton in the face.

Cutting to a secret location, the Arkham Knight is busy watching Wayne Manor and comments how Alfred is getting sloppy…calling out to Nightwing from a landline within the manor. We then reunite with Deadshot and Batman as they arrive at Stagg Industries. Alfred contacts Bruce and informs him that Nightwing is on his way to back them up. Taking out the security staff, Deadshot and Batman manage to enter the facility. The two eventually uncover a massive container labelled Project Meta – Class: Morph-0X. A gunshot erupts near their heads as they find a scientist aiming a gun at them…stating that he will protect his work, the man begins to unload on the two intruders. As bullets rupture the containment unit, a massive, smoky creature begins to rise behind the scientist. Engulfing the man, Deadshot wonders what Waller has sent him into. Batman however swings to the rescue and pulls the scientist to safety. Turning, they realize that the creature has escaped below ground…Batman then interrogates the man who reveals that they were experimenting with Clayface mud, which they were eventually able to cause it change through several base elements and chemical states. Leaping down the hole, Deadshot and Batman go in pursuit of the Metamorph.

Back across the city, Nightwing informs Alfred that he is close to Bruce’s location and something suddenly strikes his bike, sending him flying. The issue ends with Lawton and Batman in the sewers as the Metamorph descends and attacks the Dark Knight.

Well I rather enjoyed the stories from this week…lots of action and characters for Batman to battle against. First up we saw some excellent fighting against Boomerang, Deadshot and Harley Quinn…and I loved how they worked in an explanation for Batman being in Bruce Wayne’s car, Alfred’s dry sense of humor is always entertaining.

Although this issue was a rather quick read, I was quite entertaining and the art was very well done. I liked how Batman eventually is forced to team up with Deadshot…especially that he punches him in the face before doing so, showing just how much he doesn’t like the idea. We also get to see a brief appearance and fight sequence with Killer Croc. Although Croc did not appear within the Arkham Knight game, it was good to see him appear in the comics…although it doesn’t seem to line up with the Gotham City story that reference Croc’s escape from the government. Maybe that will get clarified later.

We also see some brief appearances by the Knight himself, watching over Wayne Manor and outright attacking Nightwing. He clearly has something up his sleeve and I hope that we will get to see how this unfurls in the coming issues.

Lastly, Metamorpho…although not explicitly stated, the creature that Batman and Deadshot are after is clearly the Outsider we know to be Metamorpho. Although I don’t believe him to be Rex Mason, the power base and character design are strikingly similar…Batman even refers to him as the metamorph.

Overall this was a good battle issue, and is clearly leading to something big between Batman and Metamorpho.