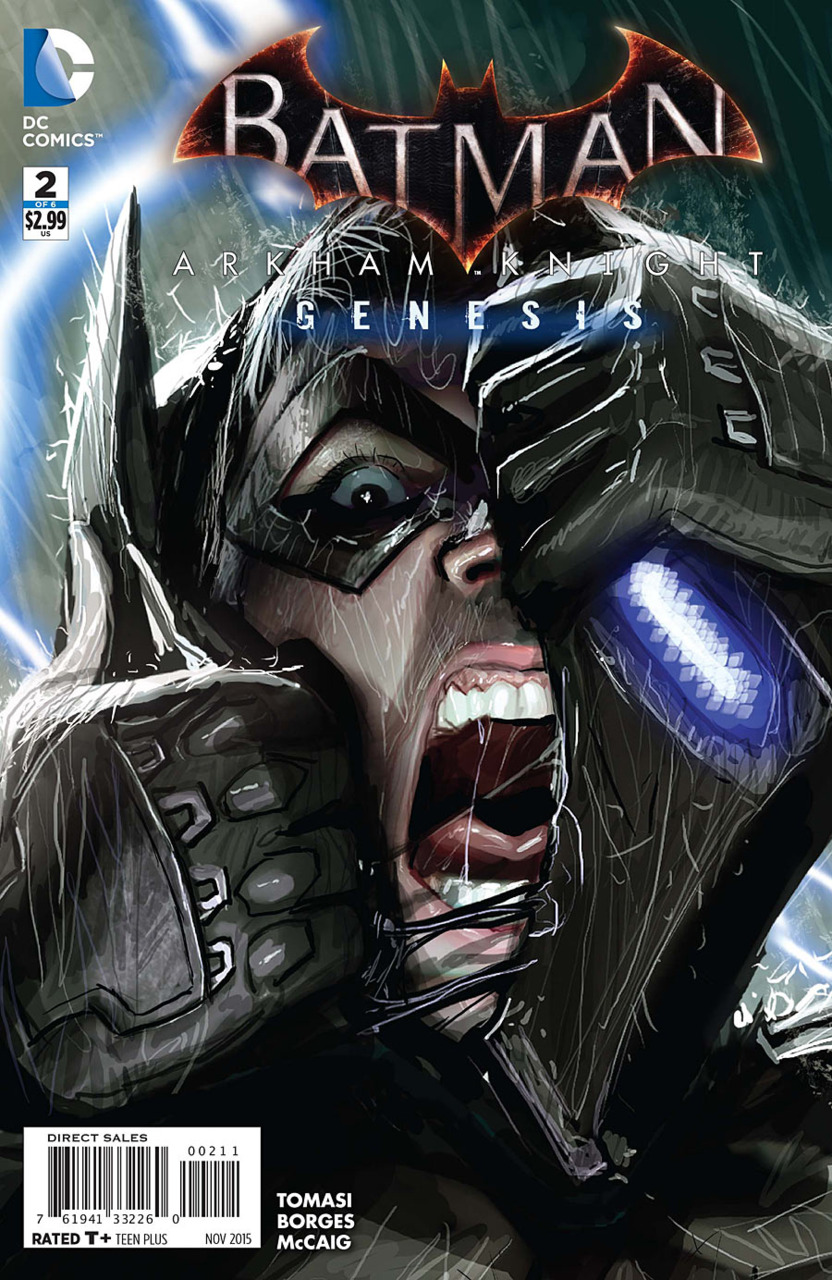 Opening in mid battle, Deathstroke is shown battling against Batman’s current partner – the Teen Wonder Robin. As Tim extends his collapsible bo staff, Robin engages the Terminator who quickly gets the upper hand…however a quick intervention by Nightwing stops Deathstroke from skewering Robin. As the two battle against the villain, the Arkham Knight can be seen watching the battle from a nearby rooftop.

As the Knight remembers his own career as Robin, we flashback to a time where Jason is shown battling against the Scarecrow and knocking him to the ground. As Batman crashes through a skylight, he lands next to Robin and tells him to get in the car. Driving back to the Batcave, Batman berates the young teen because he talks too much during his fights and gives away too much information…although he isn’t Dick Grayson, Gotham’s criminals don’t need to know that Jason and Dick aren’t the same Robin. Dropping him off at the Manor, Batman speeds back off into the night. The next morning, Jason is shown being formally adopted by Bruce Wayne and the two return home where Bruce shows him his own private entrance into the Batcave for a bookcase within his room.

Back in the present, Nightwing and Robin (Tim Drake) continue to battle against Deathstroke…flashing back yet again, Robin (Jason Todd) is shown taking down a fleeing Deathstroke as Todd believes him to have succeeded in killing the Dark Knight. However, a quick grapple line pulls Robin from the fight as Batman is shown to be alive. Quickly incapacitating his foe, Batman explains that he had faked his demise in order to have Deathstroke lead him back to his employer…having ordered Robin to let Deathstroke escape “no matter what,” Batman is disappointed in Robin. In the following months, Robin is shown to being stuck in the shadows, helping the innocent civilians escape while Batman battles against the main bad guy. However, it eventually culminates in a battle against Joker where Robin (hidden within the batmobile) smashes the car into the Clown Prince of Crime in order to save his mentor. Rushing after the clown into a building, Batman attempts to warn Jason of the trap…but the building soon explodes leaving the fate of Robin unknown.

Cutting back to the present, the Knight orders Deathstroke out of the battle having completed his mission…ultimately Jason wanted to examine Dick and Tim’s fighting styles. The issue ends with Jason stating that he will be returning to the “scene of the crime.”

Continuing to tell how Jason Todd became the Arkham Knight, I continue to be thoroughly entertained by the Arkham universe. While we get to see Jason’s career as Robin, I enjoyed seeing the “good” times before everything turned sour. I always lament the fact that Jason’s Robin career is more known for his death than what he actually did as the Boy Wonder…so it was nice to see the Dynamic Duo in action. However, I do like the change in how Jason screwed up…this of course leads to a rift forming between the two heroes that causes Robin to almost resent his mentor.

With the exploding building in the flashback, we are led to believe that this is the Arkham-verse version of “A Death in the Family” so I am curious to see how Robin’s story will unfold and lead him down the path to being captured and tortured by the Joker.

Overall this issue was pretty decent, but didn’t reveal anything too significant. I am interested to see how Tomasi will modify Jason’s “death” and where the Arkham Knight is venturing off to…what “scene of the crime” is he referring to? The building that exploded in the flashback? Or maybe the abandoned wing at Arkham Asylum where he was being tortured?

Definitely looking forward to the conclusion of this series as the legend of the Arkham Knight unfolds.