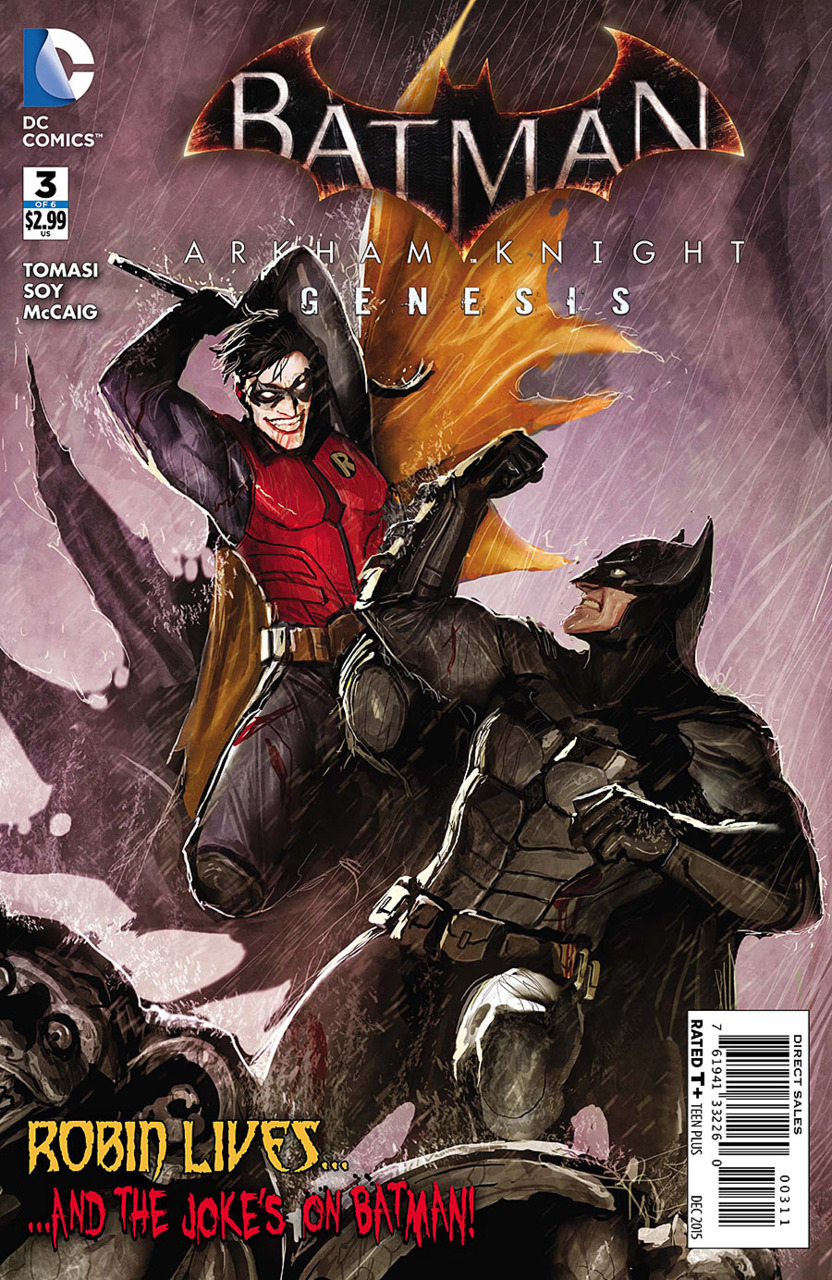 As the Arkham Knight races towards his destination, he recalls the events that led to his creation. Arriving at the abandoned Arkham Asylum, Jason enters the building and begins wondering its halls remember how the Asylum used to be. Arriving at the cell that formerly was home to the Joker, Jason blows open its floor to reveal a hidden stairwell below. Descending into the dark, Jason arrives at the room where Joker had kept him captive and tortured him.

As we flashback to the events of last issue, we see Robin (Jason Todd) pursuing the Joker into a building. As an explosion engulfs the building, Joker and Robin fall through a shaft to escape. Landing on the ground below, Joker quickly grabs a hold of the young sidekick and takes him to Arkham. Inside the hidden room, Joker is shown torturing Robin…eventually, an Arkham guard named Frank Boles arrives to return Joker to his cell.

A series of images show that, over time, Jason was tortured and beaten by, not only the Joker, but Killer Croc, Penguin, Two-Face, Bane, Victor Zsasz, Scarecrow and Calendar Man…we also see the event where Joker reveals to Jason that he has been replaced by Tim Drake. We then cut to a scene that we had scene within the “Arkham Knight” videogame, in which Joker videotapes a tied up Jason and almost gets him to reveal Batman’s identity…before subsequently shooting him.

Cutting back to the present, the issue closes with Jason thinking about how Batman never rescued him and left him “here” to rot. However, the room he was tortured in did break him…but it also remade him, as the Arkham Knight. The Issue closes with Jason spraying explosive gel in the room, leaving the building and watching it explode as he rides off into the night.

Wow. Wow, wow, wow. This series keeps getting better each month, and I have to admit that this particular issue take the cake. Dare I say that it might be better than the main “Batman: Arkham Knight” series…yes, I think I will say that.

Although it seems like much doesn’t happen in the story…a lot happens. We are introduced to a brand new origin for how Jason Todd was “killed” by the Joker, and it is awesome…and completely plausible. In the last issue, Batman witnesses an explosion that he believes claims the life of Robin…and we know from the videogame that he later received a tape showing Jason being tortured and eventually shot and killed. This issue gives us all the details of what lead to those events.

Not only do we see the gruesome torture inflicted by the Joker (electrical shocks, gross food and a crowbar), but we see that Joker allowed several of Batman’s rogues to take out their hatred/frustration/angry on the Boy Wonder. We also get an answer to question I was asking myself while playing – if Joker was keeping Todd hidden within Arkham, how was he leaving his cell to torture him? Well, the answer was obvious and completely perfect – Frank Boles. For those who don’t recall, Frank Boles first appeared in the original “Batman: Arkham Asylum” game as a corrupt and arrogant guard at Arkham Asylum. During the game, Frank is shown to have been working with the Joker and helped spring his plan, eventually kidnapping Commissioner Gordon before being killed by Harley Quinn…so it makes perfect sense that Boles has been colluding with the Clown Prince of Crime for a long time previous, maybe going so far as to being the reason the Joker escapes over and over again? As we see here, Frank lets the Joker out during his shifts to torture Jason before returning him to his cell during a shift change.

Although Peter Tomasi twists the “death” of Jason, I rather enjoyed this modern re-interpretation of these events and think they melded smoothly with the world created for the “Batman: Arkham” games.

I am still wondering how Robin manages to survive a seemingly fatal gunshot wound…guess we will need to wait till next month to figure it out.