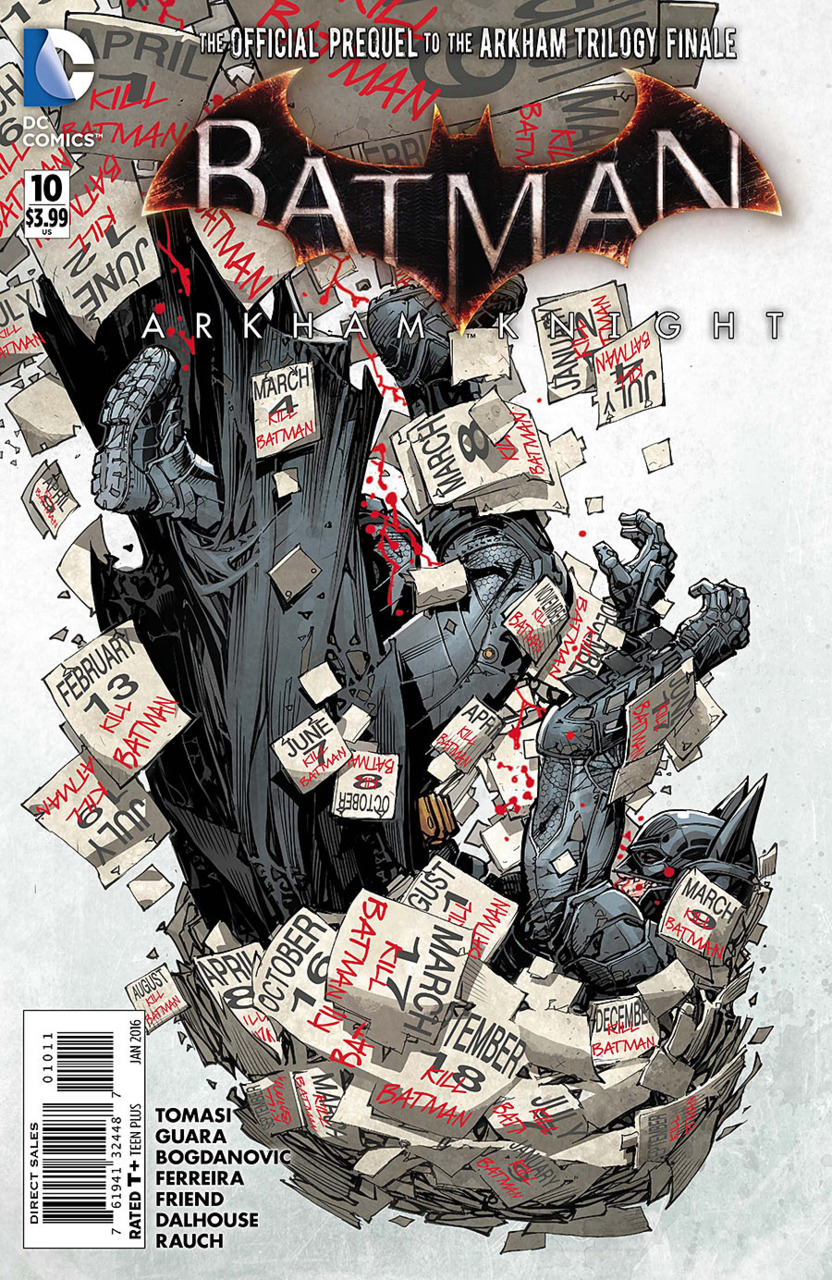 (Writer’s Note – Unknown originally, the two-part story “The Apprentice” featured in digital chapters #27-28 has not been collected in the printed version of this title. Therefore, this review will contain the ending to that story and the complete four-part story of “Burning the Days.” Part One was originally collected in the printed version of Issue #9)

Opening up where the previous chapter finished, Tim Drake is busy avoiding gunfire from the masked men. As “Bane,” “Killer Croc” and “Clayface” seemingly knock Tim out; Tim quickly unfurls a bag containing his Robin costume. As “Clayface” leads a guard into the basement looking for his prize, Robin suddenly appears on a cycle and knocks the villains flying.

Meanwhile, “Killer Croc” and “Bane” continue unloading their guns on the trapped school tour as one of the kids suggest handing over the Titan. Coming up from the basement, Robin begins getting all of the kids to safety…and jumps into battle. With his bo staff, Robin manages to quickly subdue both “Bane” and “Killer Croc.” Returning to where Tim Drake was knocked out, Robin changes back into his clothing and awaits his “rescue” by the GCPD.

Later on, as the police arrive, the Arkham Knight can be seen watching from the rooftops, commenting that this test only proves how well trained Batman’s allies are. The story ends with Robin back in the Batcave fighting more simulations of Bane, Killer Croc and Clayface. Coming up victorious, Tim turns to Alfred and tells him to run the simulation again.

As a new story begins, Tim and Barbara are shown preparing to spend a Friday evening together…meanwhile; across the city Batman (as always) is battling against a group of thugs. Demanding to know where the Calendar Man is, Batman grabs one of thugs and pulls him into the hair with his grapple gun. Landing on top of the elevated train tracks, Batman interrogates the thug as a train speeds towards them. The thug bellows that he hasn’t seen, or worked for Calendar Man since the events in Arkham City. As Batman continues to threaten the thug, he finally pulls them both to safety at the last second. Contacting Commissioner Gordon, Batman reports that all his leads have come up as dead ends…Calendar Man’s whereabouts are unknown. As the two converse and recount the Arkham City events, Batman finally heads off to Solomon Wayne Courthouse – the last place Calendar Man was sighted.

Contacting Oracle (who is in a movie theater with Tim), Batman asks Barbara if anything unusual has happened at the courthouse within the last few weeks. With the building set for demolition, Batman descends into the building to investigate. Discovering several marked calendar pages on the wall, Batman turns and comes face to face with Calendar Man himself. Grabbing the Dark Knight on the head, Julian shocks Batman and comments that the gloves were a “gift” from someone seeking to take down Batman. Grabbed from behind, the chapter closes with Batman coming up against the dreaded Solomon Grundy.

Over the course of several days, Batman is forced into battle against Grundy…who continues to regenerate and come back for more. Across Gotham City, Alfred coordinates the troops to search for the missing Dark Knight. Robin, Nightwing and Jim Gordon all search desperately for Batman’s trail which has gone cold since the courthouse.

Cutting to Central America, the Arkham Knight communicates briefly with Deathstroke and arrives at his base to make some final tests on his troops. Reporting that the vehicles and weapons upgrades have been completed, the Knight suddenly asks two of his men to attack him…if they succeed they will take command of the operation. Launching himself into battle, the Knight comments that Batman is unrelenting and he will destroy everything he touches… “being the best is not nearly good enough.” The Knight reveals that Deathstroke will be arriving soon and to remember that Batman is “only human.”

Back in Gotham, Batman continues to fight the unending supply of Solomon Grundys…it is eventually revealed that Julian has kidnapped a baby and is holding it hostage.

The next chapter begins with Vicki Vale reporting on the sudden reappearance of Batman…having crashed through the windshield of a car. Vale also tells of a list of people that has arrived with the Dark Knight…a list of targets who have been threatened to die by Calendar Man. Rushing into action, Jim Gordon arrives on site just as Robin descends in the batwing to take Batman back to safety.

Back in the Clock Tower, Oracle is busy tracking down the list of victims. Across the city, the GCPD are shown rounding up the victims and giving them an antidote for the poison…even Catwoman seems to be helping out. Delivering the antidote, and then helping herself to the contents of the intended victim’s safe. At the hospital, Azrael arrives with more victims for treatment and then disappears into the night.

As Alfred to continues to care for Bruce, Scarecrow is shown visiting Calendar Man…the chapter ends with Batman getting back into action and noting that he needs to stop Calendar Man.

As the final part begins, Calendar Man is shown descending into a dreaded nightmare at the hands of the Scarecrow. Meanwhile, Jim Gordon and Aaron Cash discuss raising their families in Gotham. Back with the villains, Julian and Scarecrow get into an argument as the latter villain demands Julian to cancel his plans for Gotham City and Batman.

Arriving at the abandoned Holiday Hotel in the batmobile, Batman witnesses Calendar Man giving back the newborn baby without so much as a fight. The issue then closes with a furious Calendar Man demanding why he simply gave up, to which Scarecrow responds “you let him go so you could guarantee that you will be there at his end. And trust me, that end is very, very close. Come, Calendar Man. All Hallows’ Eve is right around the corner.”

A bit of an oversized review since the printed editions of this series are slightly different. But overall Tomasi seems to be delivering top notch stories and tying them nicely into the continuity of the games.

At first, we have the conclusion to the two-part “The Apprentice” story that showcases a bit more of Tim Drake’s character within the Arkham universe. I enjoyed his latter half more than the first and liked how Robin managed to sneak around Wayne Labs to take down the three crooks.

We are then brought into the four-part “Burning the Days” story that revolves around the Calendar Man – Julian Day. Managing to kidnap the Batman is no simple feat, but CM seems to have the upper hand throughout most of this story. However, I was slightly disappointed that Julian never got to continue with his plan and was forced to submit to Scarecrow’s superior plan. On the plus side, this ties into the continuity of the games where you find a hidden Easter Egg that details a plan by Calendar Man that was spoiled by Scarecrow’s…however, I would have liked to have seen a nice climactic battle rather than the simple giving up that occurred.

Overall this series continues to deliver some excellent stories that bring the Arkham-verse closer and closer to its conclusion within the “Arkham Knight” game itself…as Scarecrow states, All Hallows’ Eve is getting close. I wonder how long this series will run and how many more stories that we will be getting out of this fantastic creative team.