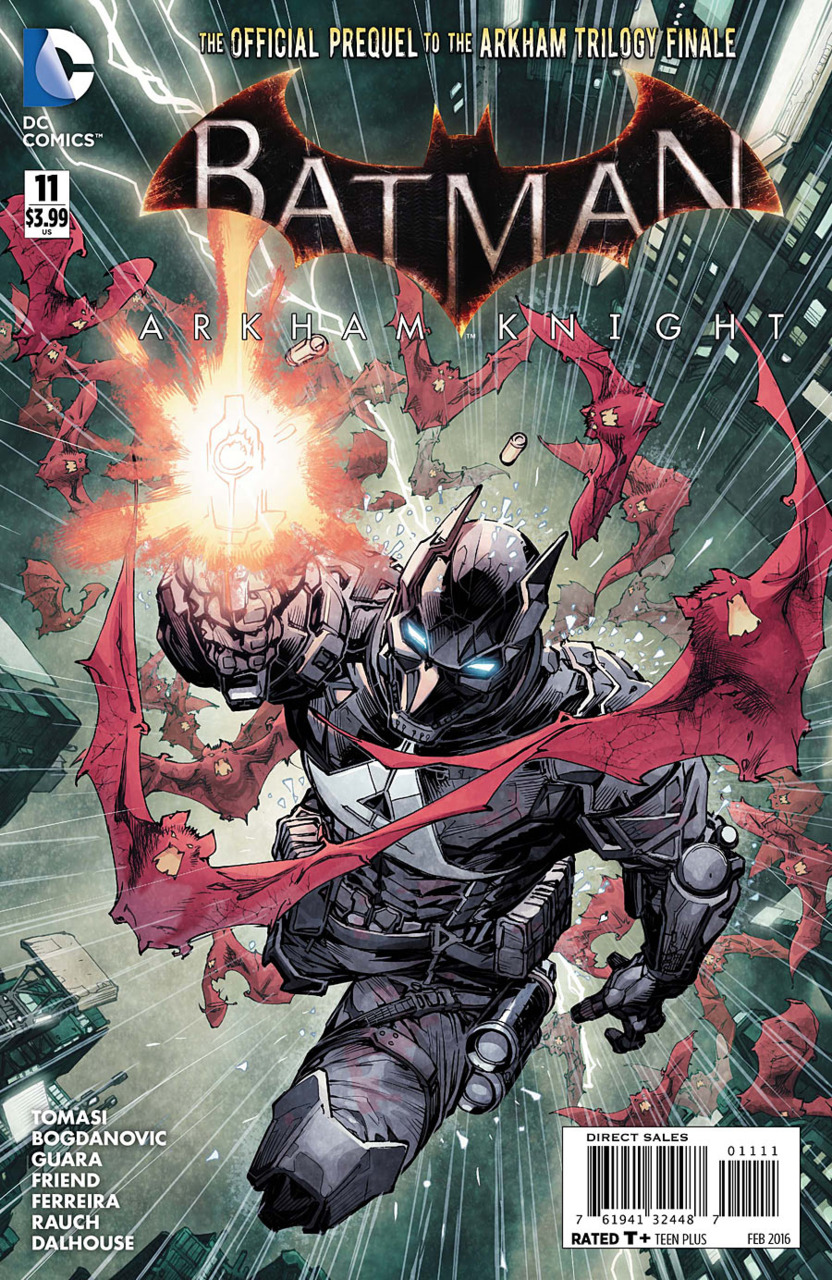 Following the rescue of the kidnapped baby from Calendar Man, the Arkham Knight can be seen monitoring communications between Oracle and Robin. The two discuss how Calendar Man’s plan seemed to change, as if he was being forced to alter his plans by an unknown force. As the Knight swings away, he drops down into the sewers and enters one of his vehicles. As he speeds away, the Riddler can be seen watching from the shadows. Returning to his work, Nygma tells his henchmen to continue their work as they return to setting up one of several Riddler challenges.

Across the city, the batmobile comes to a stop in front of GCPD as Batman hands over the baby to his thankful parents. Batman briefly talks with Commissioner Gordon and Aaron Cash about how Calendar Man simply gave up the baby without a fight…something that all three men find completely puzzling.

Coming to a stop outside the Holiday Hotel, the Arkham Knight grapples to the top of the building and finds a piece of straw on the roof – indicating to him that Scarecrow had something to do with Calendar Man’s change of plans. We then cut to Chinatown where the master of fear is seen returning to his hideout. Inside a captured man can be seen strapped to a table with fear toxin pumping through his system.

Back in the batcave, Bruce arrives home and is greeted by Alfred and the two briefly discuss what should happen after Batman is “finished.” Back in Chinatown, the Arkham Knight suddenly turns up at Scarecrow’s hideout and attacks the villain. As Scarecrow defends himself, he believes the Knight to be another of Batman’s allies. The two continue to throw each other around the room as the Knight taunts Scarecrow and hints that the two have met previously.

Cutting back to the batcave, Robin arrives and asks how Batman is recovering from his ordeal with Calendar Man. Nightwing is also present and the two discuss with Alfred how Batman seems to be feeling his mortality as of late and how he considers Dick and Tim to be his legacy…they also talk about how Bruce still feels the loss of Jason Todd.

Once again with Scarecrow and the Knight, the two villains eventually come to a standstill and seem to reach an agreement that they both want the same thing – to defeat the Batman. Touring him around his base, Scarecrow shows the Knight his experiments with his advanced fear toxin. Stating he needs a new test subject, the Arkham Knight mentions that he has the perfect man for the job.

As we open on the final chapter of the issue, Bruce can be seen working out as Alfred prepares him for a meeting with Simon Stagg. Across the city, Scarecrow and the Arkham Knight have captured Bane and subjected him to the advanced toxin. Reeling in fear, Bane has gone mad and seems utterly terrified of a giant bat-like creature. We then see the Knight briefing Scarecrow on his master plan and the two discuss how they will need to bring all of the Gotham villains into the plan in order to weaken the Dark Knight. Stating that it will take time to convince the other foes, the Knight offers up the perfect distraction.

Aboard on of Simon Stagg’s airships, Bruce meets with Stagg where he informs him that he is pulling funding from Stagg’s research. As Bruce leaves, Stagg can be seen telling his assistant to inform Crane that he wants to meet with him.

Returning to Wayne Enterprises, Alfred informs Bruce that the Knightfall Protocol has been updated and is ready if needed. Donning his cape and cowl, Batman departs and is immediately attacked from behind. Lifted into the air, the issue closes with Bane holding Batman off of a gargoyle and saying hello to “Mister Wayne.”

As we move closer and closer towards the events of the game, I can definitely feel the series winding down to a close. We get a lot of references to the events of the game in this issue…we saw a shot of the Cloudburst device in Stagg’s airship, Batman and Alfred discuss the Knightfall Protocols and Scarecrow is seen going off to meet with the other Gotham villains.

I do have to say that it has been a bit confusing in regards to Scarecrow and the Knight’s relationship. For some reason I had believed that they were already allies prior to this issue…but I guess that was wrong. Now we see how Scarecrow and the Knight came together and forged their deadly alliance in order to take down the Batman.

Another point that comes up is the fact that Bane calls Batman by his real name. Now, in the events of “Batman: Arkham Origins,” Bane had in fact deduced the true identity of Batman…however an overdose of the TN1 serum erased that data from his brain (convenient). Now we see that Bane has this information yet again…I wonder if he managed (again) to find this out, or if the Arkham Knight simply chose to give that info to him.

All in all this was a pretty decent issue that sees the events of the game slowly creeping into the events of the comic. We have once more issue remaining and I’m looking forward to see what happens between Bane and the Batman…can’t be good if Bane is strung out on Scarecrow’s fear toxin.