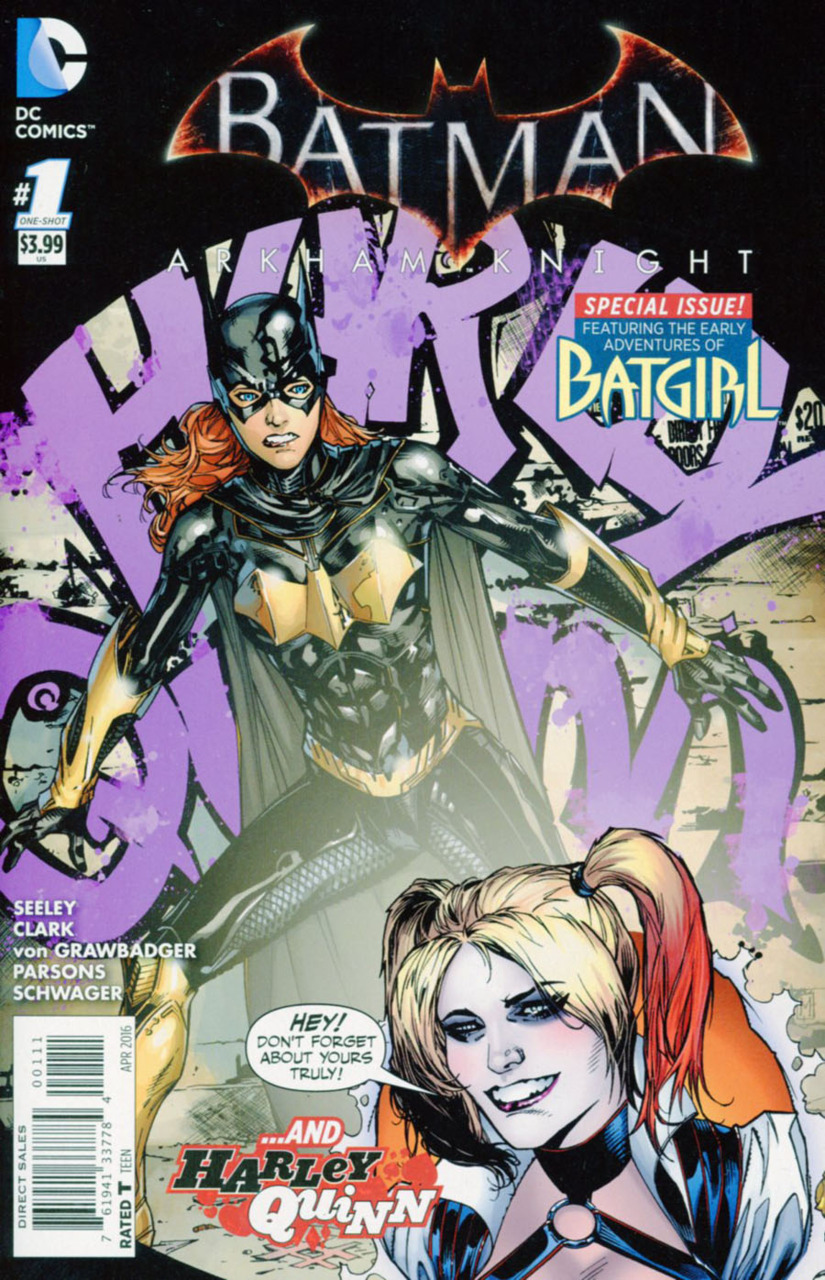 A special one-shot telling an untold story of Batgirl and Harley Quinn’s past, the issue opens at Miller Harbor as we see Killer Croc emerging from a large pipe towards Batgirl. As an explosion erupts in Croc’s face, Batman drops down and kicks his foe to the ground. Blinded by the flash grenade, Batgirl finally regains her sight to see Batman standing over an unconscious Waylon Jones. Grappling off into the night, Batman warns Batgirl to hang up the cape…despite having inspired the new heroine.

Cutting to Arkham Asylum, Dr. Harleen Quinzell stands before a review board being led by Warden Quincy Sharp as she attempts to persuade the warden to release the Joker. Ultimately denied her request, Harleen departs and visits the Clown Prince in his cell. Informing the Joker that she is being transferred out of his care, Harleen informs Mistah J that she wants to continue his battle against Batman and Joker gives her the name Harley Quinn.

Back in Gotham Square, Barbara Gordon is on a lunch break from the Gotham Public Library as a Charlie Chaplin monkey drops a note in her lap. The note is in fact a flyer advertising a free preview for Liquid Black Circus and Carnivale. Going off to see the performance, an explosion soon rocks the Square as Harley Quinn makes her debut.

Freeing a tiger from its cage, Harley begins her assault on the Square as Barbara runs a young boy to safety. Distracted by a pair of laughing hyenas, Harley misses the quick change of Barbara to Batgirl as the Dazzling Daredoll leaps onto the scene. Knocking Harley to the ground, Batgirl takes on the rogue tiger. Grappling to the top of the Circus’ train, Batgirl releases an oil slick that stops the feline in its tracks. With the tiger incapacitated, Harley Quinn attacks Batgirl with her giant mallet and the two battle across several pages. Knocked down, Harley is nearly eaten by a hippopotamus but Batgirl throws a flash grenade to save the harlequin.

Some time later, Batman has arrived at the scene and is speaking to Batgirl. Informing Batgirl that he wanted her to quit, Batgirl counters that she isn’t a copycat and is proud to wear the symbol of the bat. She does what she does for Gotham City.

Back in Arkham Asylum, Dr. Quinzell informs Joker of her failure and begins to argue with the clown. During the fight, Batgirl had informed Harley that Joker was using her, but Mistah J quickly reels his victim back in with a paper-white rose. Opening a book of schemes, Joker tells Harley that they have a lot of work to accomplish.

An interesting one-shot that shows Harley Quinn’s origin as well as showcases the early distrust of Batman on Batgirl. In tune with the SDCC “Batgirl Begins” story, this tale fits nicely in the early career of Barbara Gordon as she starts her career as Batgirl. Likewise, it’s interesting to see how the Arkham-verse has made the choice to have Harley Quinn operating in secret out of Arkham while no one else knows her identity but Joker.

I really enjoyed this issue as we got to see some expansion on some the “Batman: Arkham” universe characters and showed Babs’ reasoning for fighting in Batman’s crusade…not because she was a copycat, but because Batman couldn’t be everywhere. She was being Batgirl for Gotham itself. I always find it inspiring that Barbara is one of the few Bat-Family characters with little tragedy in her life – Bruce, Dick, Jason and Tim have all had tragedies that have pushed them into the vigilante life. Barbara however was always the shining light in the darkness, and I like that the Arkham series has decided to keep that trait.

It was also interesting to see that Harley Quinn’s origin was altered slightly. I find it really cool that instead of Harleen losing her mind and breaking out the Joker, Harley Quinn is born to carry out the Joker’s work while he is still incarcerated within Arkham Asylum. I also liked the nod to Harley’s hyenas as she makes a note in the circus battle that they would make the perfect sidekicks.

Overall that was a great single issue that helps expand the Arkham-verse and I hope that DC continues to expand the universe and focuses on the other characters.