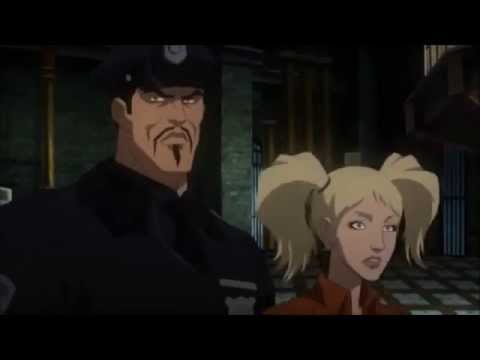 The wonderful creative team that helms the DC Animated Universe has released a trailer for the upcoming Batman: Assault on Arkham. It is about a minute and a half to tease us on the next adventure in Gotham this fall. It is being billed as taking part within the “Arkham Asylum” video game universe and be presumably used as a tie-in for the final chapter of that game series ‘Batman: Arkham Knight.” I wanted to get my thoughts on the trailer out to you as we gear up for the release of the upcoming “Son of Batman” direct-to-video movie.

The trailer is about as ‘assembly-line’ as trailers get. It blends voice over to set up our dilemma, it has text cut-ins that gives us a hook, and it ends with several seconds of blow out action. It reminds me of old action movie trailers with the hard metal score and clipped together lines. But, just because it is a very basic and formulaic trailer, doesn’t mean it isn’t good and that it doesn’t do its purpose.

The Voices – These voice clips are exactly what the trailer needs. We first hear CCH Pounder lending her voice to two great lines of set-up. “We have another suicide mission,” and “Joker stole a dirty bomb and hid it somewhere in Gotham.” We then get Harley Quinn voiced by Hynden Walch with the same laugh Arleen Sorkin gave us on Batman: The Animated Series which leads into Batman. Kevin Conroy, the voice of Batman I hear every time I read a comic, think about Batman, dream about Batman, and watch other Batman media. He is vengeance. He is the Knight. He is Batman. The other two voices I wanted to touch on quickly are Troy Baker as The Joker and Neal McDonough as Deadshot. After “Arkham Origins” and this trailer we can all agree he’s just doing Hamill right? He’s got Hamill lines, Hamill’s delivery, and Hamill’s intonation. At this point it feels clear that while J.J. Abrams has Mark on the treadmill to fit back into the Jedi tunic, we will be getting facsimiles of his voice performance as The Joker. I’m not sure how I feel about it now, but I feel like after this movie I will have something more definitive. Neal McDonough I mostly know from film work (Captain America, 88 Minutes) and his run on the TV show Justified. I looked up his credits and he is a relative newcomer to DCAU and this will be his first role in a feature animated role for DCAU.

Story Teases – The Suicide Squad seems like the focal point of this trailer. I am not very familiar with them as a team, but I do know Harley Quinn and Deadshot. I kind of like the concept of a Batman story not centered on Batman, but through the perspective of these other characters. With the casting of McDonough and the lines in this trailer, it seems Deadshot will be given an integral role in the proceedings. It’s a classic and rote set up to be sure, but Neal sums up the team’s plight of being sent on an actual suicide mission with “We’ve been played.” I am interested to see exactly how Batman figures into this story, if we will be sent in to rescue the squad, or if he will be relegated to finding the bomb and the squad will be left to escape the trap on their own.

Animation – I am a fan of two types of animation for Batman. One is the Bruce Timm Batman: The Animated Series style and the other is this anime inspired style that we saw a lot of in “Gotham Knights” The action looks like it will be kinetic, with special excitement for how Deadshot and King Shark are shown to fight.

Final Thoughts – The trailer is a good tease. It sets up the newer and lesser known characters right up front and lets the viewer get a peek at how they factor into this Batman adventure. As I said, the trailer itself is uninspired in its construction, but it works and it executes on getting me primed for the upcoming movie.