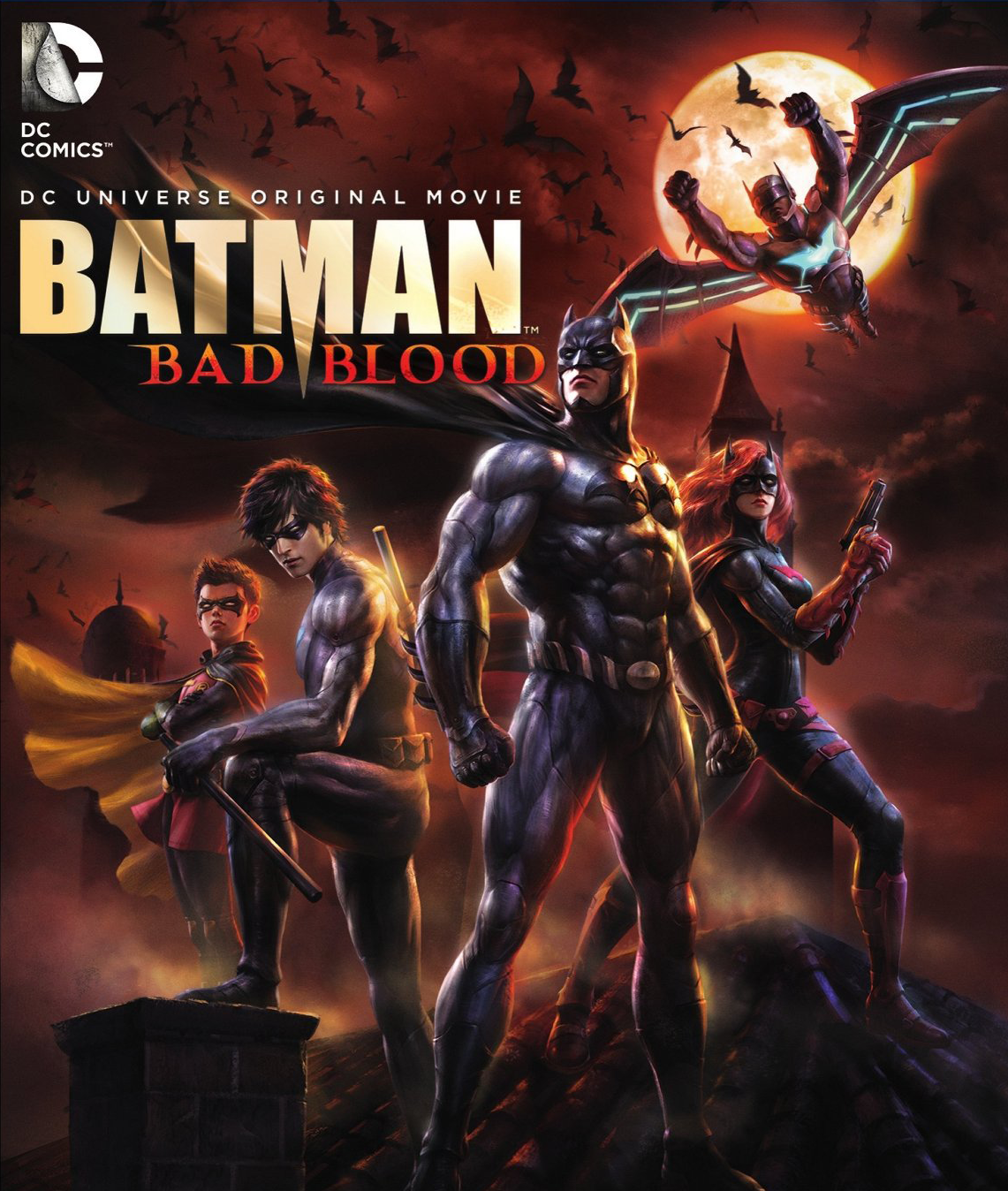 Editor’s Note: Batman: Bad Blood released digitally two weeks ago and is now available at all fine retailers including Amazon.

During a fight against the mysterious Heretic, where Batman is assisting Batwoman, a gun totting, karate kicking vigilante fresh on the Gotham scene, an explosion rips through the facility, leaving Batman missing presumed dead. With Batman’s body unable to be found, Batwoman aka Kate Kane narrowly escapes with her life.

In Batman’s absence, Nightwing is recalled by Alfred from Bludhaven, and Damian Wayne, the son of Batman, returns from a remote monastery in Tibet. Alongside Batwoman, and the rather nimble Alfred, (who executes a dazzling karate kick in one end sequence) the Bat-Family must step in to maintain order and protect a nervous Gotham City. The city’s anxiety is highlighted when Commissioner Jim Gordon appears on TV to advise the citizens the GCPD has the situation under control, but he appears both unconvinced and unconvincing, as Damian is quick to point out, en route to the city in crisis.

Meanwhile, Talia Al Ghul, Damian’s mother, the lethal daughter of Ra’s Al Ghul, and once the lover of Batman, is behind Heretic and his eclectic gathering of cohorts. Talia has also enlisted the Mad Hatter in a nefarious plot to take control of the world via a technological brainwashing interface which will re-program the minds of the globe’s movers and shakers, essentially refitting them with her personal “Talia Al Ghul”-style program of world domination. It definitely feels like Mad Hatter got a “villain power” upgrade for this movie, and the role is written and performed with some relish, minus some of the atrocious over-acting I have felt marred that character’s impact previously.

On that note, the voice work in Bad Blood is distinguished throughout – I felt the strength of Damian and Dick’s performances immediately, and this is coupled with the excellent modelling of both characters. Dick Grayson in particular is well served by the animation. We are treated early on to a montage of Nightwing fighting in Bludhaven, and scattered throughout the movie are shots of Dick Grayson sans Bat uniform, rocking a gold chain and wearing the longish almost 1970’s era haircut which the animators obviously feel is his best look.

The actual batsuit picked for this movie is a rather sleek number with anime leanings – it’s effective although not personally my favorite. However, it suits Dick Grayson better than Bruce, and Dick does indeed wear the cape and cowl for the majority of the movie. Overall the animation was fantastic. We are treated to some lovely fully lit scenes in Kate’s residence, as a counterpoint to the darker settings of Gotham City. The action and fight scenes are dynamic and fluid throughout.

When Dick and Damian meet in Gotham and go out on patrol as the new Batman and Robin, I found myself hoping for a little more of the brilliance and camaraderie that distinguished their relationship and growing friendship in Grant Morrison’s run on the books. The chemistry and performances are there, and we do get a glimpse of this in a joke or two, but the demands of story and the simple weight of characters in Batman: Bad Blood mean that this relationship is given less time to shine than perhaps many Bat-fans would hope. Still, beggars can’t be choosers, and I greatly enjoyed all the moments each character had onscreen, both solo and together.

I was reminded watching Batman: Bad Blood what a great character Damian Wayne is, filled with nuance and room for growth – he works so well in an ensemble cast against different characters such as Dick Grayson. I hope that Warner Bros. continues down this road and produce more animated movies showcasing both these characters. After taking a heavy role in the last couple of animated adventures, Damian has a nice side role in this movie which should please his fans but leave them craving more stories focused on his character arc.

The storyline of Kate Kane (aka Batwoman) is front and center in this movie and I feel it was an excellent (if slightly over efficient) introduction. We hit the basic character beats of her backstory and motivation straight away, her strength of character, her military background and the strong yet complex relationship with her father. The movie thankfully doesn’t shy away from her sexuality. There is in fact a delightfully offbeat bar scene with a certain female detective from the Gotham MCU, which I found both pleasing and fun, and was one of the best character beats in the whole movie. Fans of the character will hopefully find Kate is well-served throughout, her visuals and voice acting are also top notch. Kate is an important part of the movie’s set up and resolution – the movie ties her backstory slightly to Dick Grayson and as a viewer and supporter of the character, I felt she was a very natural inclusion to the Bat-Family within these movies.

There definitely seems to be a lot of room and potential for Kate Kane to take a leading role in a future animated movie – there’s mention of her reckless behavior after coming back from serving in the military, even some talk of her drug use. She’s not watered down and any story compression is the byproduct of some judicious script writing and direction within time constraints, as there is a lot going on in this movie plot wise.

Although I’m sure he has his fans, the character of Luke Fox aka Batwing, is probably given the least to do – after an astonishingly simple transition scene into what appears to be the greatest robotic flying combat suit ever constructed by an individual outside of Marvel’s Tony Stark, (for a horrible moment I thought Luke was going to go “full automatic” Cyborg style) Batwing unfortunately seems to then spend much of his onscreen time fighting a tricked-out Killer Moth and Firefly mid-air in what feels like extended scenes from a glossy Transformers animated pic. It would be unfair to be critical of the character or these scenes, as they are effectively rendered and visually quite cool. They do however seem to add little to the momentum of the movie other than for Batwing to suddenly become quite helpful in the climactic battle scenes – literally in picking people up. He’s also the unfortunate recipient mid-movie of one of Bruce Wayne’s most abrupt and bitchy lines ever delivered onscreen, and frankly many in Batwing’s position might have flown away and never come back!

Nonetheless, Batwing does return for the wrap and I’m pleased for his inclusion. I think to do some justice to that character’s arc (we do get the basics of his character path as he is the son of an aging Lucius Fox, and also an Afghanistan vet) it would be an idea to perhaps team Batwing with another hero such as Nightwing or Robin for another movie set in Gotham in which we could more fully explore his personal worldview and still have him connected to the wider Bat franchise.

At times I’ve had some minor quibbles with the voicing of Batman in various iterations of the animated movies but in this instance when Batman speaks, it’s delivered in a dependable trademark growl of appropriate depth that adds to the gravity of that performance. It really should not be that hard to get the Batman voice acting done correctly and WB Direct Animation to their credit get it right far more often than not.

Often times when we discuss the figure of Batman in an animated movie he can typically tend to dominate the action and tone of the piece, but in Batman: Bad Blood he is mostly a side character due to his disappeared/injured status for much the time – the movie only benefits from this as it builds up the aspect of the “Bat-Family” into a genuine fighting unit. Curiously we see his origin replayed in a flabby, predictable dream scene which for mine was one of the few unnecessary moments in the movie. This was immediately followed by scenes of Bruce at the mercy of Talia and the Mad Hatter on a type of brainwashing torture device – I found these images original and powerful. The sight of Bruce strung up to the machine at the mercy of his captors was perhaps one of the most physically vulnerable images Bruce/Batman that I could recall in recent times.

Some joyless pundits may question just how many vigilantes are required to patrol Gotham, given the amount of firepower on hand by movie’s end, but this is all part of the fun, and the inevitable Penguin cameo at the end, tommy gun blazing from his getaway car, only reinforces the notion that crime is a cancer and Batman and company are perhaps the only cure – and a temporary one at that!

In summary this is very entertaining movie with a lot of vibrant and colorful pieces in play. Batman: Bad Blood is a fantastic addition to the animated DCU and also an excellent advertisement for Gotham City and the various Bat denizens scattered throughout. The movie contains a strong directorial vision and an efficient, compressed style of storytelling which got through some complex backstories and storytelling dynamics fast and effectively. When I saw the legendary writer J. M. DeMatteis was on scripting duties I smiled. A master of the craft.

Batman: Bad Blood is in the upper tier of the animated movies WB have produced in the last 3-5 years, with a modern tone and a keen and respectful eye toward the comic properties they are adapting and building upon. I would place it alongside Son of Batman, Batman vs Robin and Assault on Arkham as extremely worthy additions to any Bat-fans library of titles. For my money, they are all excellent animated features. There is some mild cursing in the movie and around the normal amount of blood free cartoon violence. 10+ I would think.

As a side-note, if like me, you may have held a slight, misguided soft spot for Talia al Ghul through the years, this might be the movie where that ill-fated romance hits the skids. She really is a terrible mother.

And keep watching till that final scene, kids! It will put a smile on your face.

Over and out, Bat Fans.

A lover of Batman since picking up “Dark Knight Returns” off the shelf at age 13 in a dimly lit comic shop, there has been no turning back for David ever since, just the never-ending fight for Justice!

David is the writer of The Asanti Series, an urban fantasy/action adventure series of novels. DEMORN: BLADE OF EXILE is Book One in the Asanti Series. Book Two, DEMORN: CITY OF INNOCENTS followed in January 2016. Both are out now on Amazon.

He is currently working on Book 3 in the Asanti series, DEMORN: SOUL FIGHTER to be released later in 2016.