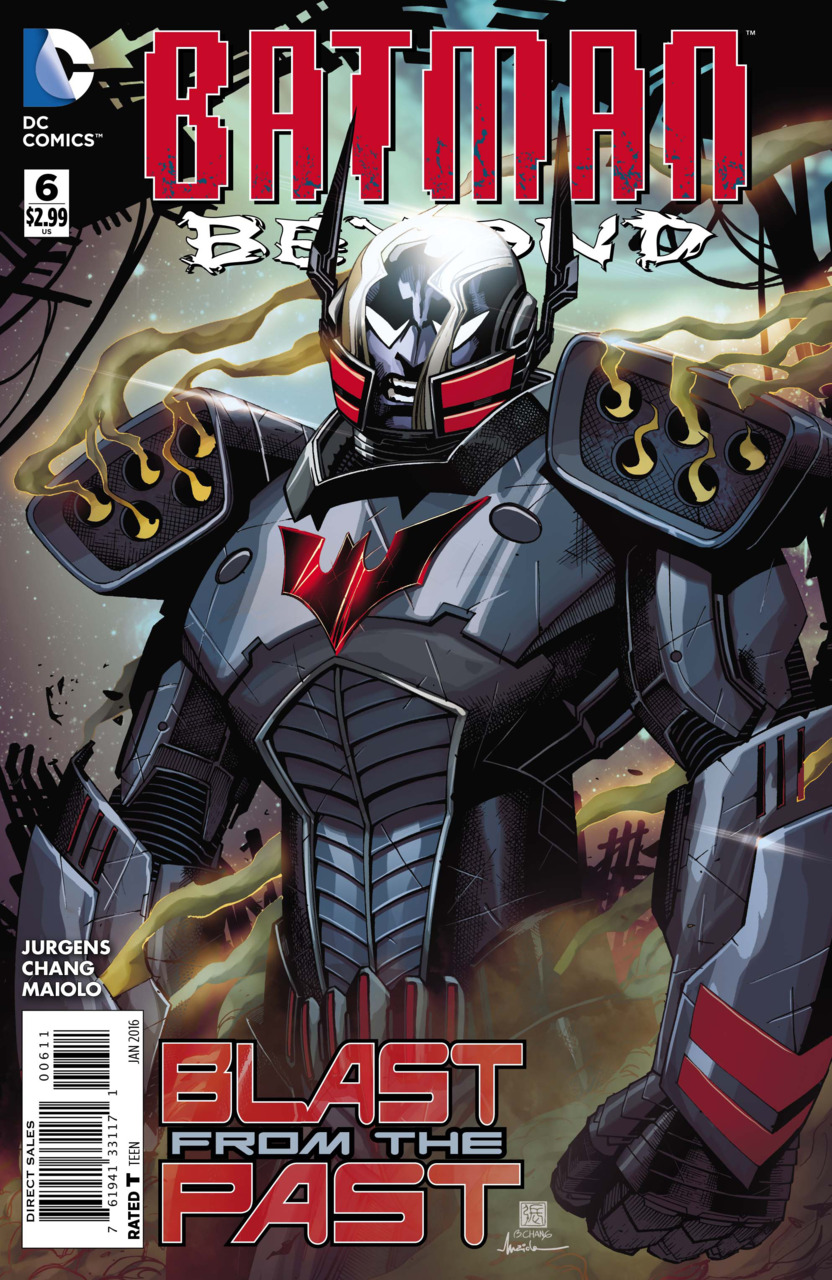 “Brave New Worlds Part 6” opens on the Justice League satellite on the moon. Brother Eye is questioning Deanna Clay, Inque’s daughter he is keeping captive. His issue is why Tim Drake would go to the building owned by the Court of Owls. To find out he has ordered his borgs to confront Batman at the building.

Batman still in the armor is fighting with the borgs waiting for backup to arrive. That backup is Inque and Micron. The fight at the door while Drake goes inside to check on Barbara’s progress with the device they came for.

The device Barbara is working on is an old JLA teleporter, Bruce stashed in the building. Barbara gets the teleporter functional and Tim steps onto the platform. Both wish each other good luck and Tim vanishes.

Tim rematerializes in the satellite and immediately triggers the intruder alert. Eye knows that Tim is on board. The fight between the humanoid form of Brother Eye and Batman begins. Tim did not expect to face off with a physical body, he expected a computer as before. Tim fires his rockets and momentarily thinks he destroyed Eye but he was mistaken. Eye comes back with force shattering Tim’s face plate. It is revealed that Tim is not alone. Inque teleported to the satellite with Tim and moves to infect Eye to keep him off balance. Inque tells Tim to get Deanna to the teleporter pad to escape the satellite while she distracts Eye. Tim does not want to leave Inque behind. The plan was to destroy the Eye network from within and since Eye is humanoid now the circumstances have changed but not the plan. She plans on sacrificing herself to destroy the net.

Back on earth, Barbara joined the fight outside and the defenders are about to be overwhelmed. Suddenly the borgs stop. Back on the satellite, Inque continues her infection of Eye. The satellite starts to break apart forcing Tim to evacuate with Deanna. In front of Deanna and Tim, Inque is able to destroy the humanoid body of Brother Eye. The satellite continues to fall apart forcing Tim to evacuate with Deanna leaving the presumed dead body of Inque. Just after they escape, the satellite explodes.

On earth all the precincts are reporting that the borgs have stopped dead. Tim succeeded. Tim rematerializes in the Court of Owls building reporting that Inque did not make it. Tim hugs Deanna and Barbara welcomes him home. Tim muses that he is not sure he will ever feel at home in this time but in time you may never know.

This issue was difficult to synopsisize because it was a fight issue. After five issues we finally see Tim square off with Brother Eye. I liked this fight. Tim never gave up despite all the losses he has experienced from the direct loss of his team the Titans to the loss of the Justice League to Brother Eye, Tim continued to fight on. He was brave and smart enough to know that in order to end this fight, he had to take on Brother Eye himself and even when surprised by the humanoid Brother Eye, Tim continued the fight.

I liked Inque in this issue as well. It showed a different side of her than the villain we have seen before. She truly loved her daughter enough to sacrifice herself for her. She knew that the plan had to succeed and her one goal was the safety of her daughter. Now that Brother Eye is seemingly destroyed I am interested in seeing where this story will go from here. Will we see more members of the Justice League beyond? This issue was a fun ride.