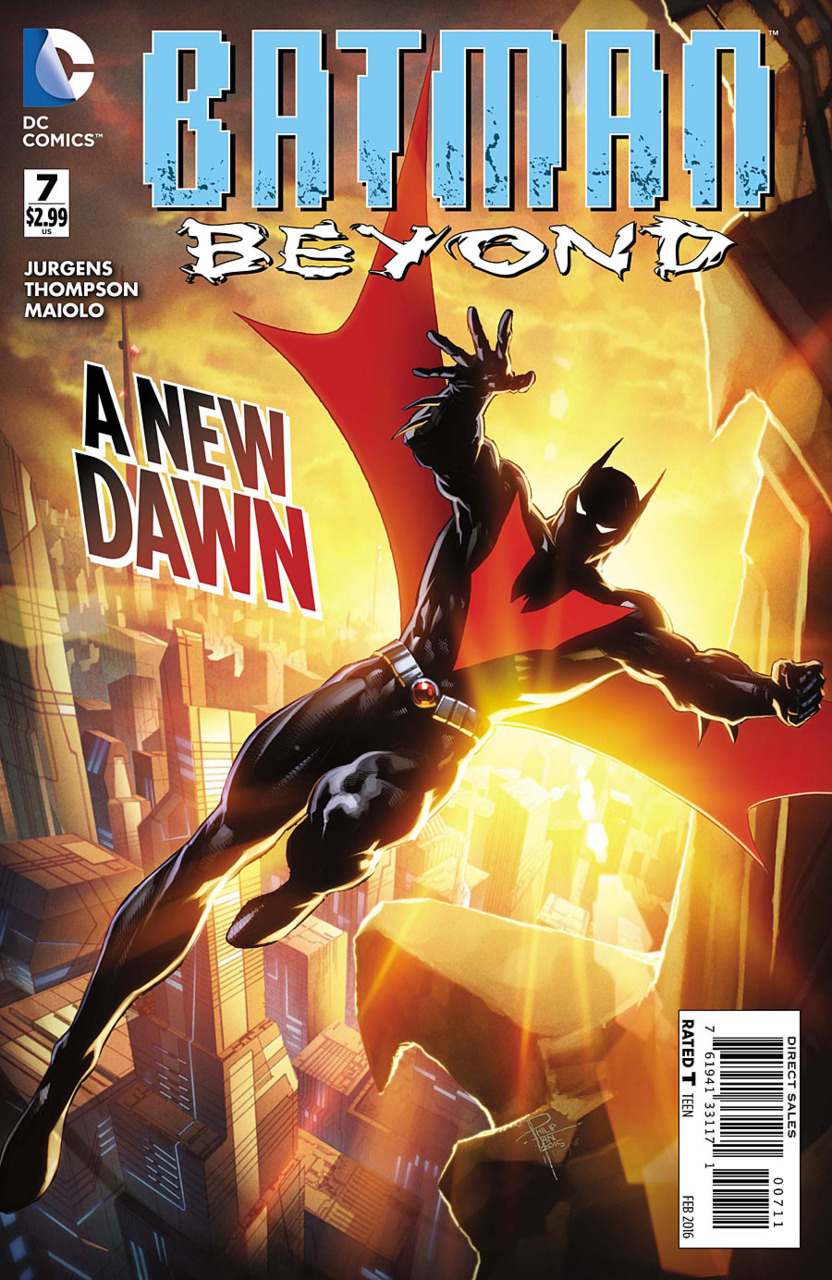 “City of Yesterday Prologue” begins in the Batcave. Tim is working to get the batsuit back on line and he has not been successful. Barbara comes in to check on him. After some banter about age and music, Barbara tries to convince him to get something to eat. Tim resists and continues to work relying on his brains to match Bruce’s as Bruce never wrote down the plans for the suit. Tim changes the subject to the armor that Jim Gordon wore as Batman. He asks if it was developed by Powers Technology. Barbara says yes and that it was the first step in the merger with Wayne Enterprises. Bruce however did not trust Derek Powers and feared that his work would be found by Powers. Tim finds some notes on power conduits and reasons that Bruce used his usual code of skipping words throughout the sentences to uncover the specs to the suit.

On the streets of Neo-Gotham, it is a rainy night. Matt is out late and enters Krinsky Tailoring. Matt is not interested in clothes, he has the arm of one of Brother Eye’s cyborgs. Matt is looking for the source of the technology. Krinsky resists telling Matt that it is illegal for him to have the part. In fact only the Global Peace Agency is allowed to have the part. We get no other information about this organization in this issue. Matt “shames” Krinsky in helping him and finds that the part originated in Metropolis. Just then the door is kicked in by Rewire. A battery Krinsky sold him was junk and he came back to get payment, either a new battery or his money back. Krinsky has neither and Rewire presumably kills Krinsky as Matt leaves.

Back at the McGinnis apartment, Nora is chastising Matt as he enters after all it is late and it is a school night. Matt apologizes and goes to his room where instead of sleeping starts a research project on Metropolis.

We switch scenes this time to the rooftops. Tim dressed in the suit is ready to test his repairs with Barbara back in the cave. Barbara shares that she feels she should be out there which prompts a comment from Tim that he has no problem with Batgirl being out there. Barbara says she needs to stay in the cave as the A.L.F.R.E.D. AI is still down and until it is repaired, someone needs to make sure that Tim’s fixes do not get him killed. Tim starts flying and he and Barbara talk about Neo-Gotham and despite its visible improvements, it is still full of greed corruption and apathy. Tim’s jets stall and he starts to fall to the streets below. Tim is able to reactivate the thrusters and soars back into the skies.

We come across a Jokerz robbery. Two of the gang are stealing jewels just for the fun of it. Batman continues his test by taking down the two thugs and declaring that Batman is back which Barbara agrees.

Barbara invites Tim to stay with her until he can find his own place. Tim is reluctant and Barbara begins to express some discomfort in the set up. Barbara has been living alone for a while and Tim had been gone for a while from her point of view. She sees Tim as when he first disappeared and she and everyone else has changed since then. Tim suggests he leave. Barbara insists that he stay and that she will adjust. Tim lets the matter drop and says that he is going to Nora’s to see Matt. He still feels that Matt holds resentment for him having Terry’s suit and he wants to be good to him. Barbara understands as Terry was special and she believes that Matt is also.

At Nora’s apartment, Nora finds that Matt has gone. He leaves a note saying that he went to school early but the school says that he never showed up. Tim shows up at the window and discovers that Nora has noticed some changes in Matt. He has become secretive to her. Interspersed we see that Matt has snuck out and presumably on his way to Metropolis.

This issue is labeled as a prologue to the next arc and in a way that is true. This sets up the journey to Metropolis but I believe that this is also an epilogue to the first arc of this series. We see the repairs to the suit and continue with the character exploration of Barbara and Tim.

I noticed that Matt during his research of Metropolis is playing with a Green Lantern ring. The arm that Matt has is also green, I wonder if this is the arm of John Stewart who we saw fight Batman in the final battle of Neo-Gotham. I am not sure if this is important or just an Easter egg. It is interesting to note that the Justice League was also referenced in Matt’s research, Metropolis was the headquarters of the League. I wonder if we will see more League activity in this arc. Only time will tell.

Interesting read but it did not wow me as much as the other issues did.