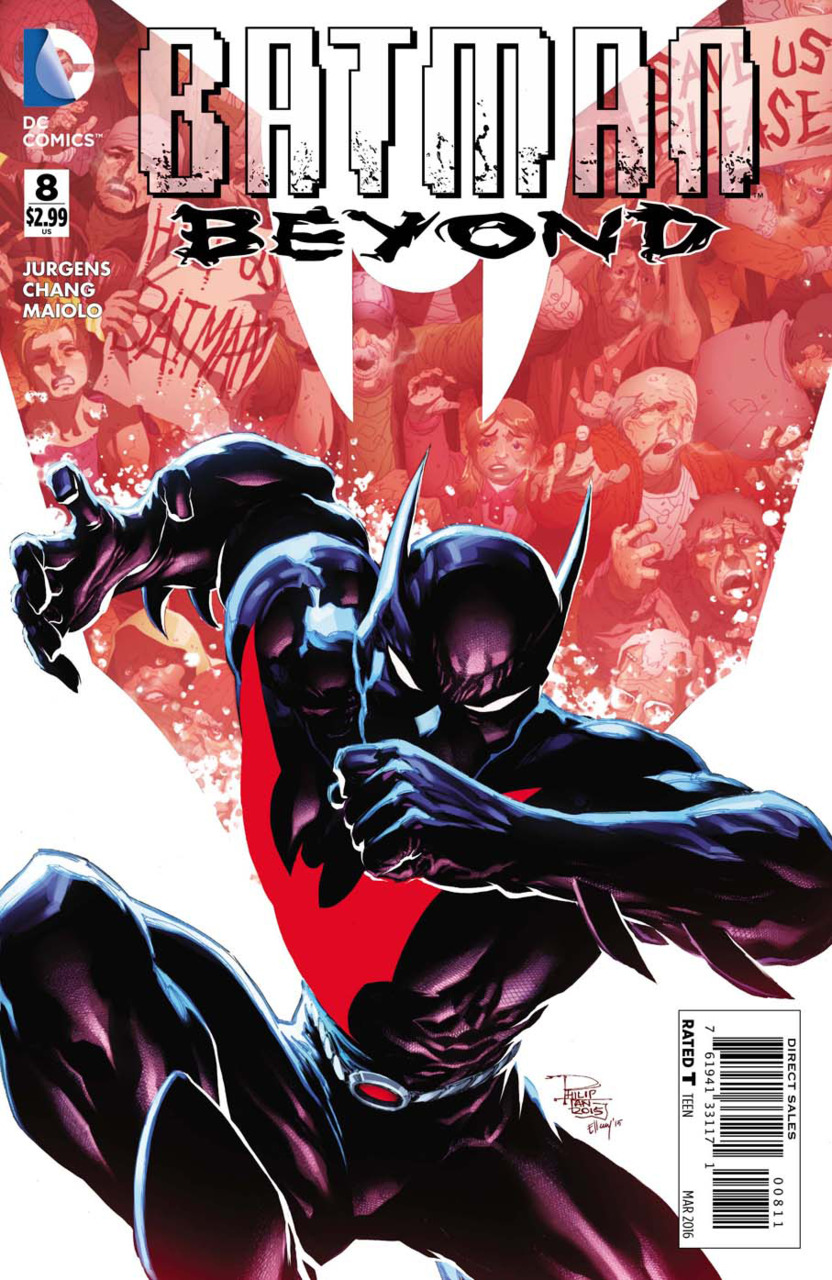 “City of Yesterday Part 1” opens with Batman in the skies of Gotham looking for Matt. Barbara is in the cave giving Tim information from a security drone that took a picture of Matt at a tailor’s shop in Burnside. Batman enters the shop and is attacked by Rewire who is surprised that Batman does not recognize him. He muses that this might not be Batman. In the fight Batman questions rewire about Matt. Rewire was only at the shop to settle up a debt but he does remember a kid the day before. Batman pushes Rewire for more information but the only info Rewire gives is that the kid was there for the scanalyzer. Rewire runs out saying that there is only ten seconds before the shop explodes. Batman starts working on the scanalyzer. What Batman sees is an image of Green Lantern’s cyborg hand. Batman is able to escape before the shop completely explodes.

Elsewhere we catch up with Matt. He is walking through the wasteland that used to be Metropolis. He stumbles across some locals who are setting up a place to hold up for the night. The locals after convincing Matt to show himself offer to take him in and take him back to Gotham. Matt declines saying that he is looking for something big in Metropolis and walks off.

We now see a flashback story from the design of the caption box is a story from Micron. He talks about a battle he, Big Barda, and Warhawk were having with Brother Eye in Europe. Superman and Kai Ro, this time’s Green Lantern were fighting in Munich. The battle goes poorly for Warhawk and Barda as both are converted to cyborgs. The two attack Micron and in order to survive, he became subatomic. When he woke up he learned that he was the sole survivor as the rest of the League was converted. Micron is telling this story to Tim as both work on rebuilding Neo-Gotham. Batman tells Micron that Matt McGinnis might have a Green Lantern ring. The two are interrupted by a disturbance outside the walls of Gotham. Two thousand survivors from Metropolis are trying to get into Gotham because they heard that there was food inside the city. The police are preventing the civilians from entering. Batman arrives at the disturbance and starts to insist that the cops let the people in. During the argument, we meet the mayor of Gotham, Luke Fox. Fox knows that this Batman is Tim Drake. Barbara briefed Fox on the identity of this Batman. Fox does not want to allow the people in for fear that if they enter the entire system of Gotham will collapse. During this conversation, one of the cops snickers. He saw a kid leave Gotham on a garbage truck and Batman knows that it was Matt.

In Metropolis, Matt is listening to his recorded history lesson of Metropolis. Matt is looking for the Watchtower, the headquarters of the Justice League and it is revealed that Matt has the ring. Matt starts to approach the structure but he is not alone. Three creatures are watching Matt. They want to find out why Matt is in Metropolis and they say that the boss will want to know. Next issue, The Last Bat on Earth.

This was not an exciting issue. There was very little action and I really did not get into the character beats of this issue. We do learn that Luke Fox, the former Batwing is the mayor of Neo-Gotham and Barbara is feeding him information. Unfortunately, we learn the fate of the League and that Micron is the only survivor. I was hoping to see some of the other characters.

The big question of this issue is what is Matt looking for and why does he need a Green Lantern ring? Who are these creatures that are spying on Matt and who is their boss?

Overall, this was an average issue that just did not hold my attention. I am hoping that this arc gets better but only time will tell.