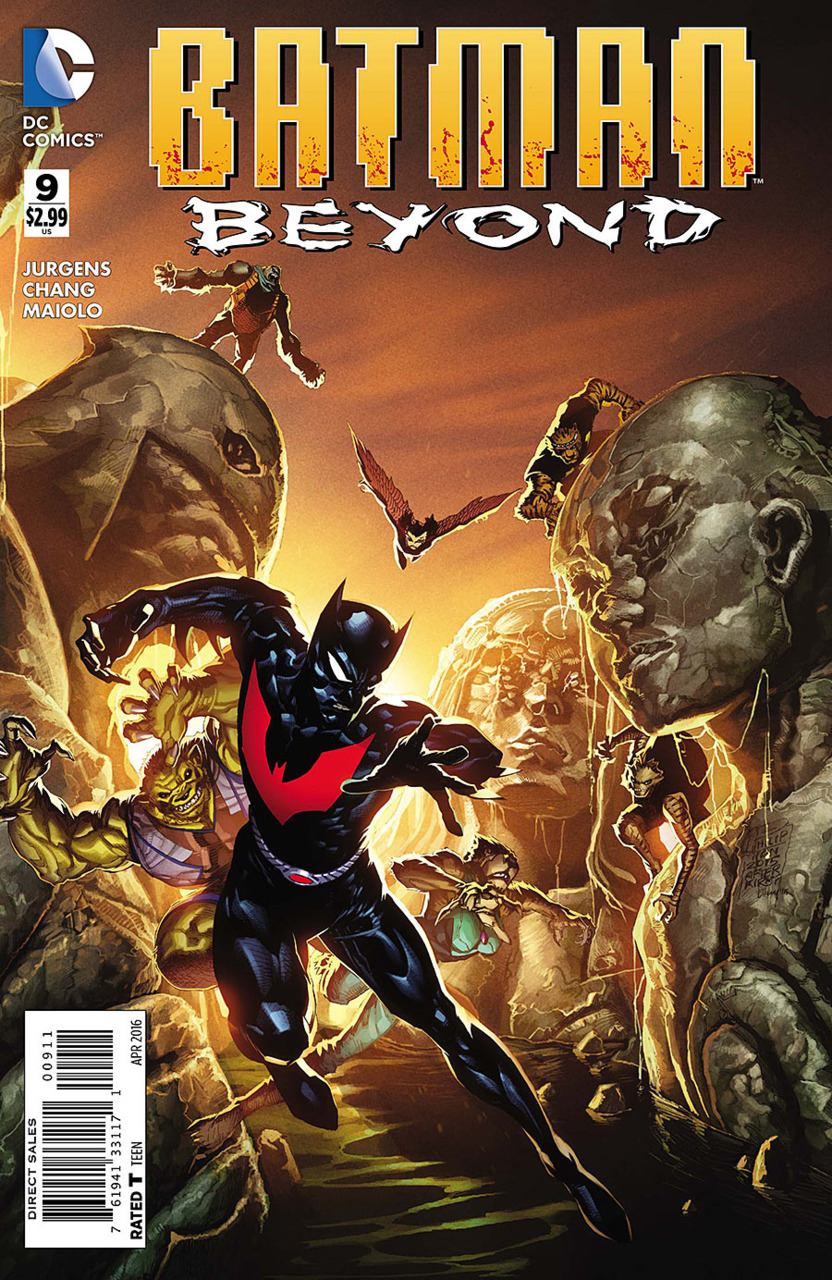 “City of Yesterday” opens with Batman heading to Metropolis to search for Matt McGinnis. He is in communication with Barbara in the cave. We get a recap from the conversation at the wall in the end of the last issue where Batman learned that Matt was headed to Metropolis. Tim marvels at how far the city of Metropolis has fallen since his time of origin. Tim asks Barbara to take care of the refugees trying to enter Gotham because Gotham is all the world has left, the city has to take point in the rebuilding of the earth.

Back at the wall the refugees are still trying to pile in to the city.   The people are in search of medicine and food they believe the Gothamites have. We learn that Gotham does not have an unlimited supply. One of the refugees attempts to push his way in and is attacked by one of the Gotham officers. Micron steps in to try to calm the situation and the discussion continues when Barbara arrives at the gate. Fox and the security guard move off to get reinforcements, he fears that the situation will erupt when the refugees realize that Gotham also has limited resources.

We return to the Batmobile, Batman is flying over the ruins that used to be Metropolis. He lands on a building and sees a billboard advertising a Doctor who can “make you a millionaire”.

We now find Matt. He is in the city feeling thirsty and hungry. He looks up and sees Batman in the air. Matt tells himself that Drake does not trust him to take care of himself and he runs off. We see the animal creatures from the previous issue are still spying on Matt.

Batman lands in a bazaar and shuts off the bat suit in order to go incognito as Tim Drake. Tim meets an old woman who is selling cigarettes. Tim asks the woman what the Doctor would advise about smoking. The woman asks Tim why he would bring him in to the conversation. She asks Tim if he has someone to sell. Soon others enter the conversation and they learn that Tim is from Gotham, “the garden of Eden”. Tim tries to change the conversation to his search for Matt. After the conversation, Tim believes that The Doctor may be the key to finding Matt. His only lead is that the doctor is in the area of Metropolis that still has power.

Matt meanwhile has found the Justice League Watchtower. As he is about to enter he is grabbed by the ape man. They discover that Matt is carrying the cybernetic arm of Green Lantern when Batman swoops in and grabs Matt. He reaches the earth and is pursued by the tiger creature. Suddenly the Green Lantern ring Matt is carrying leaves his pocket and enters the Watchtower. Matt chases the ring while Batman engages the creatures. Batman puts up a valiant fight but he is still overpowered by the creatures and soon blacks out.

Matt in the Watchtower is still following the ring. The ring leads him to what looks like life support tubes holding the bodies of Aquagirl, Warhawk, Barda, Green Lantern and Superman in his Beyond uniform. Matt declares that the Justice League is alive.

Meanwhile the creatures bring the unconscious Batman to the Doctor who is Dr. Cuvier. Next issue Justice Lost.

This issue was better than some of the prior issues. We get some characterization of Matt here. He is jealous of Tim and I think he wants to prove to Tim that he is not helpless.

We get a good fight with the animal men and Batman does put up a good fight, even impressing the creatures but I do find it convenient that he went down too easily. The reveal at the end of the issue that the Doctor is Dr. Cuvier looks like it is supposed to mean something but it is over my head and I did watch many episodes of the Batman Beyond TV series.

The better reveal for me is the apparent survival of the Justice League. In the last issue Micron recounts, the fall of the League to Brother Eye and we even see a flashback of Barda and War Hawk becoming the Eyes cyborgs. We also saw a corrupted Superman in his traditional blue and red suit fight Tim in prior issues. What we see here is that Barda and War Hawk are not cyborgs and the Superman we see in in his black and white suit he wars in the Justice League Beyond comic series that takes place in the time of the original Batman Beyond series. I am not sure what this means but I am looking forward to the next issue to find out what really happened to the Justice League and is this really the Justice League. Only time will tell.

The issue had good action beats and I was happy to see the League but the final revelation of Dr. Cuvier left me confused. Who is this man and why should I care?