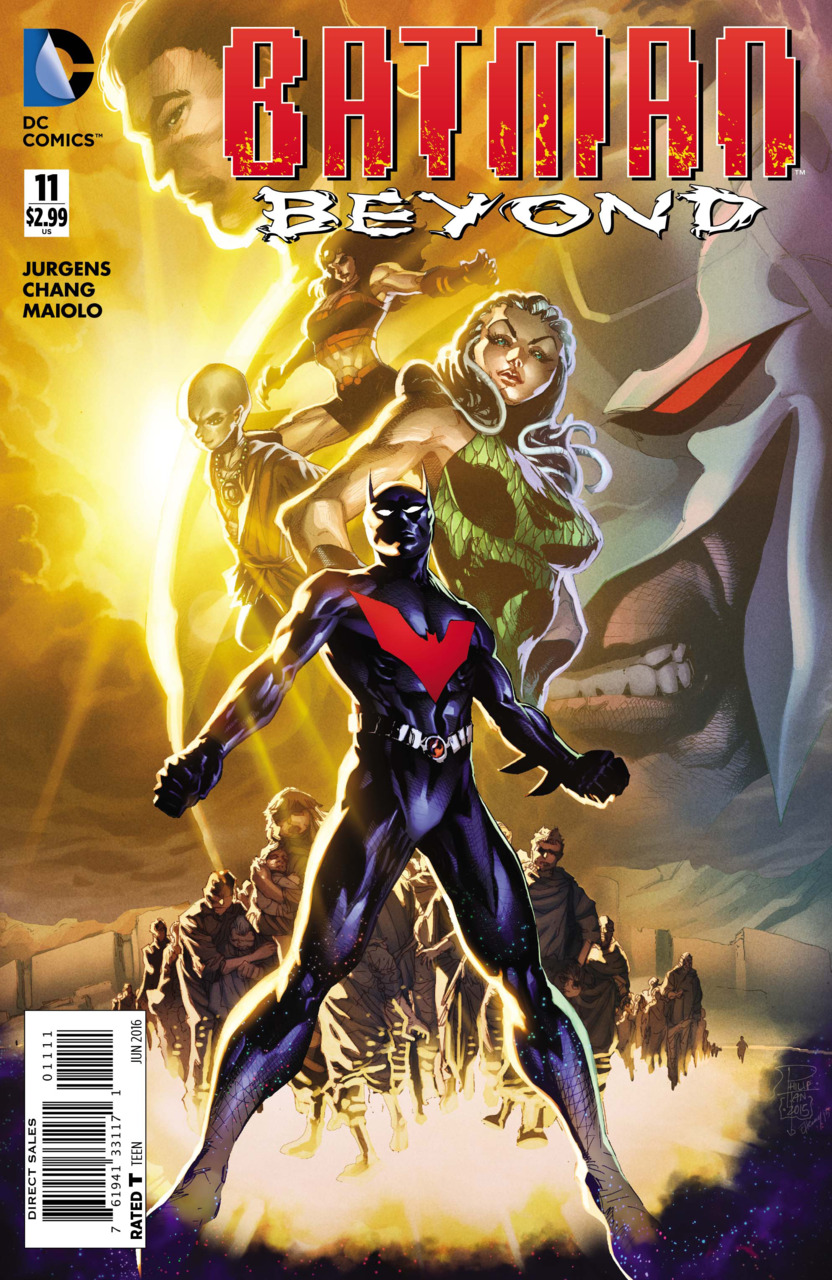 “City Of yesterday” begins with the Justice League and Cuvier thinking that Batman is dead. We also get a glimpse of the invasion of Gotham and see that the police is more than willing to act as defending soldiers than cops. We learn that on the back of the heads of the League are implants which affects the bearers perception of reality. Cuvier is able to shape the reality of the League to whatever he wants. Cuvier says what we saw last issue that the League never saw Batman but instead saw a Brother Eye Borg. Tuftan questions why Cuvier allowed the League to live, after all Cuvier’s plan was to become just as Tuftan and the other man beasts. Cuvier says that he envisions the ultimate mixture of man and animal with power. Tuftan accuses Cuvier of wanting to be the lone king of the jungle. Cuvier just says that his plan has never changed, he just wants to turn the chosen ones into survivors.

Inside the Watchtower, Matt desperately searches for Tim Drake. Matt is hoping that Tim was smart enough to follow him. Tim becomes visible. He did not know that there was cloaking tech in his suit. Tim became invisible and dodged Barda’s blast, escaping death. Matt urges Tim to follow him, he has a plan to stop the Justice League. That plan is Superman. Matt starts to work at freeing him from his stasis cell. Batman is concerned that Superman could be like the others and if he is, it would be worse for Matt and Batman. Matt continues working on freeing Superman.

Suddenly an air raid siren blares. Batman on the monitors find that the Justice League is leveling what is left of Metropolis. Matt taps into the League’s implants and the two see that the League are seeing everyone as Brother Eye’s Borgs. The League thinks that the war with Brother Eye is continuing and they are attacking civilians with ferocity. Batman races off to stop the League and Cuvier enters the control room of the Watchtower. As Superman is freed, Cuvier activates his transmitter.

Batman engages the League in the city. He has his hands full. Back in the Tower, Superman is holding Matt by his shirt with Cuvier, Tuftan, and the other man beasts watching. Tuftan turns on Cuvier knocking the transmitter out of his hand and destroying it, freeing Superman from Cuvier’s control. Cuvier tries to run out and Superman rips off a piece of sheet metal and goes after him.

Back in the city, the battle does not go well for Batman. He is able to escape Aquagirl, but Kai-Ro forms a construct sword and is about to impale Batman when Superman jumps in the way and orders the League to stand down. The implants all fail and Superman destroys them freeing the Justice League. Superman never saw the devastation of Metropolis and Brother Eye took the League out of the battle before his full onslaught of Earth. Kai-Ro notices that Batman’s voice has changed. Batman identifies himself as Tim Drake. Superman shakes his hand and identifies himself as Jon. Batman admits that he has a lot to catch up on. Superman agrees but first there is some business to take care of.

The League opens discussions with Tuftan. Tuftan admits that he has no human past and he just wants to be left alone. The others that Cuvier changed are permanently changed and they need to learn how to live with their new non human form. Tuftan leaves and takes the man beasts with him. Mankind will only destroy the world and leave the man beasts the only dominant species. Matt chides Batman saying that he was right and now because of him the Justice League is alive.

Back at Gotham wee see Micron trying to reestablish order. Barbara is attempting to get the cops to stand down with no luck. The Justice League including Batman arrives to bring order to the chaos. The people need to stand together, not has tribes but as humans to rebuild the world together. The League will do everything it can do to make their lives better but they must stand up and help the process.

Micron is reunited with the other members of the Justice League leaving Batman and Superman to walk off. The devastation is disheartening but Gotham looks like it came off easier than the rest of the world. We learned that the Eye allowed the League to remain alive in order to use them as his ultimate soldiers but instead of the Eye gaining control, Cuvier did. Now that is over and the Justice League with Batman is back to get Earth back on its feet again.

We shift to Rewire. He is talking to an unseen boss by radio. He has concerns about the return of the Justice League but his boss figures the heroes will be too busy fixing the world that they will leave Gotham to them. Next issue: “Meltdown”.

This issue wraps up the Metropolis and Justice League story arcs. We finally have the Justice League together again. The action here was exciting. We see Batman in action and learn more about his suit, mainly the cloaking technology.

The villain of this arc Cuvier was so so. I still do not know if he had any significance to Batman Beyond continuity and nothing was revealed to give a new reader of this time and universe an idea of his history.

The idea of the heroes perception being controlled is not a new concept to me. I have seen this trope time and time again so I was not sure about the creativity of this plot point. I was not clear why the League’s implants did not fail as quickly as Superman’s did when the transmitter was destroyed. Instead it was not until Superman arrived that the implants spontaneously failed.

The animosity between Matt and Tim may be real but I am finding it getting old quickly. It seems that Matt is trying to prove himself possibly to the point that he believes he should be Batman. I do admit that Matt has a better handle on the time line than Tim but this competition that I see is getting tiresome.

Overall the issue was enjoyable but again no wow factor here.