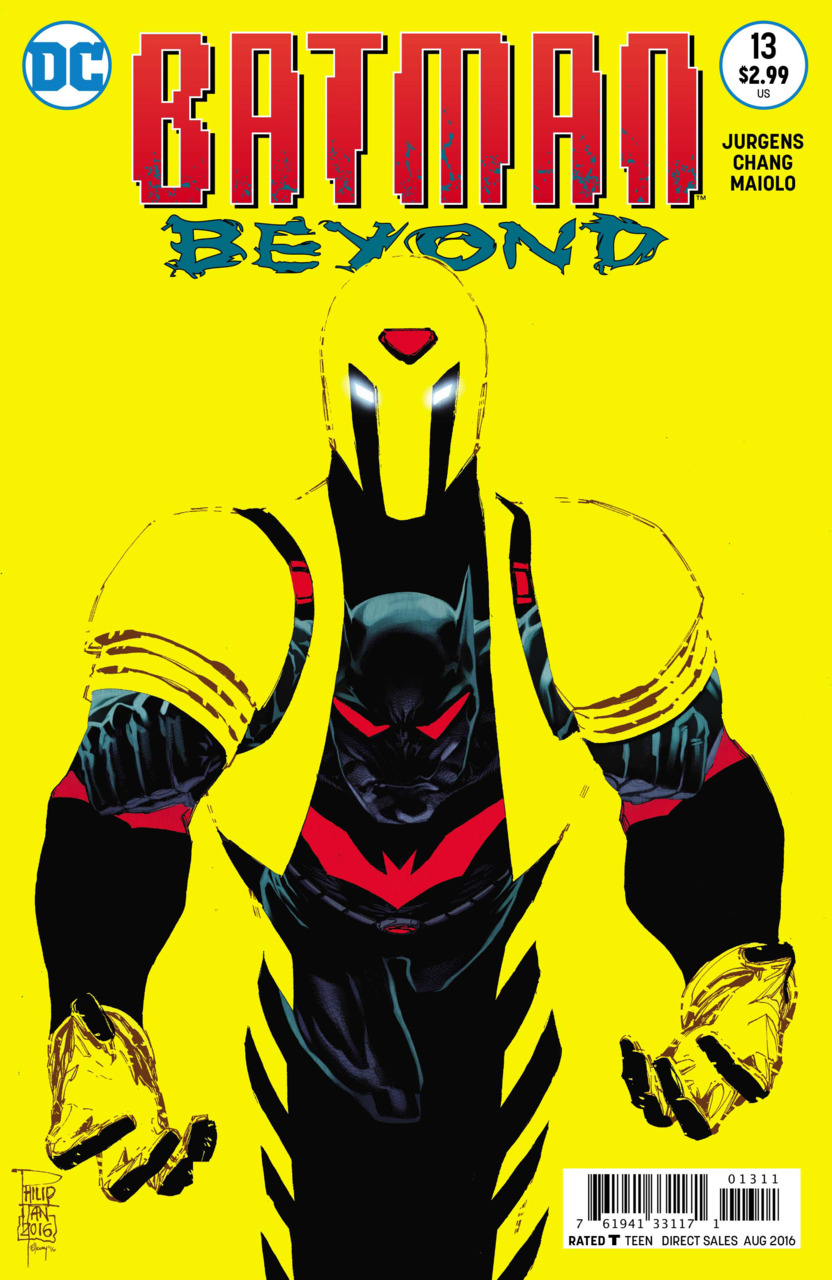 “Wired for Death Part 2 of 4” begins with Tim drowning in the Gotham River after his initial battle with Rewire. His life flashes before his eyes as Barbara is frantically tries to get him to wake up. Tim internally struggles with the desire to wake up. Back in the cave, Barbara discovers that the suit has an oxygen system that never activated. She also discovers that the suit went through a total system shutdown that should not have happened unless it received a mental command to shut down. In order to wake Tim up, she sets an electrical surge through the suit completely waking Tim up. Barbara finally gets through to Tim and he is able to activate his oxygen supply enabling him to swim to the surface. Barbara has Tim return to the cave for a full systems diagnostic.

Back at the cave, Barbara and Tim start to work on the suit. Barbara muses that she needs to return to her role as the police commissioner of Gotham City but her duties as commissioner are not needed just yet. She now has what she calls bureaucratic work collating a list of the dead after Brother Eye and the food riots from the previous issues. The verdict on the suit is in and the suit reads has fully functioning. Rewire stole a top secret very small and powerful battery that Barbara thinks he wants to use as a weapon.

Tim catches the Red Robin suit in the corner of his eye. He sees that it is displayed as a memorial. Tim says that he wanted the world to think he was dead, while he was in New York tending bar and living. Barbara says that is Tim’s personal history. From their historical perspective, Tim just disappeared. Tim lived through the Earth 2 invasion of Earth that to Barbara and the current timeline, never existed since Tim was able to stop the invasion from happening. In this timeline Tim Drake left and never returned. Bruce exhausted every lead to find Tim but failed.

Terry McGinnis, the new Batman thought he could earn Bruce’s respect by solving the mystery of the disappearance of Tim Drake. In his investigation, Terry found Terminal one of the leaders of the Jokerz gang. Terry asks about Red Robin and Terminal points him in the direction of the Joker. Terry checked on that lead despite the fact that the Joker was dead. Barbara says that this parallels Tim’s search for Rewire.

From here we get two stories going on simultaneously. Terry’s search for the Joker and Tim’s current search for Red Robin. To aid Terry, he had Bruce Wayne while Tim has Barbara Gordon. Both in their own times go to a funeral home. Terry finds what he believes to be the living Joker in one of the caskets, while Tim discovers that he too is not alone in the funeral home. The Joker attacks Terry while Tim finds Rewire. Barbara notices that Rewire looks bigger than she remembers him and his voice sounds different than Davis Dusk, the man who was Rewire. The parallel battles rage while Bruce questions that Terry is fighting the real Joker while Rewire just wants Tim to leave him alone. Terry moves in to get a good look at the Joker while Tim tries to get closer to Rewire to allow Barbara to properly identify him. Terry learns that he was fighting one of the Jokerz when his gang shows up while Tim tries to convince Rewire that he can help him stay alive. Terry takes out the gang while Rewire takes out Tim.

Barbara discovers that the suit got an overload command from Rewire but she asks how is that possible. Rewire escapes.

Both stories return to the cave. Terry laments his mistake and talks with Bruce about the operation. Tim on the other hand laments with Barbara. Barbara wanders how Rewire is able to control the suit without wearing it and she finds that Dusk’s body was discovered weeks ago. This Rewire is a complete unknown. Both Bruce and Barbara shut the doors leading to the Red Robin memorial and Tim wishes Terry was around to help him be Batman and help him navigate this new world he finds himself in.

The scene shifts to Rewire. He is reeling from Batman’s attack. He tears open his shirt and we see a battery embedded in his chest. An individual off panel is talking to Rewire about Batman, saying he has always persecuted him even killing Rewire’s predecessor. Rewire says that his suit is all that is keeping him alive provided he can find the batteries to power his suit and he removes his helmet. We do not see his face. A hand grasps Rewire’s shoulder and we see Spellbinder with his arm around the shoulder of Terry McGinnis who is Rewire. Next issue Terry, Rewired.

This was a good issue. I liked the the juxtaposition of Terry in the past and Tim in the future. The two stories mixed in very well as both characters are on similar missions and have the similar assistance in the cave. One complaint is that it sometimes was difficult for me to see which story I was reading in the panels as they both melded together so closely.

It is interesting to see that with Tim’s initial jump into the past of Future’s End, he may not have stopped Brother Eye as was his mission but instead prevented the Earth 2 invasion from happening, negated a lot of the future we saw in Future’s End. It was good to see the detail of Tim being really time displaced in this future. His experiences do not match with history and that creates turmoil in Tim.

The final reveal that Terry McGinnis is in fact Rewire surprised me. There were the clues that he had some control of Tim’s suit giving the thread that he may have worn it himself which pointed to Rewire being Terry. The final splash reveal was good. I really want to see where the next two issues lead and I hope to get some back story of Terry and what he was doing in this time and how did Tim get the suit in this new time line.

Overall, it was a solid, good issue, but some places would be a little hard to follow for the casual reader.