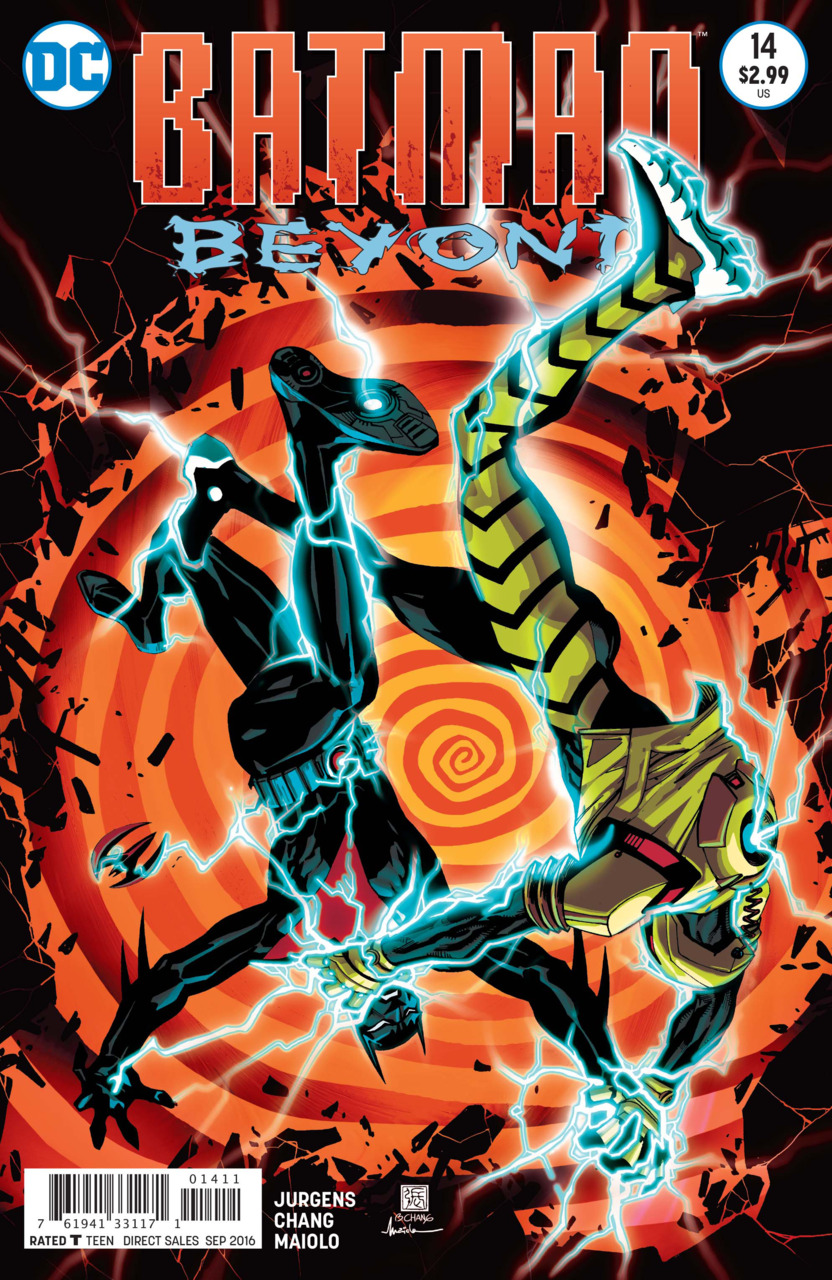 “Wired For Death Part 3 of 4” begins with Matt and Tim running through the he woods. This is a time of bonding for the two as they discuss Matt’s feelings about Batman and Terry and Tim taking up the mantle of Batman. Matt recounts to Terry the story of when he discovered that Terry McGinnis was Batman.

School had been let out due to a failure in the grid. All computers and communication systems were down. Matt and a couple of friends had to walk home because the school could not contact their parents to pick them up. As they were crossing a bridge they heard a fight. They looked down from the bridge and saw Batman battling Shriek. Bruce meanwhile was in the Batcave attempting to give Terry Intel as the battle raged but even his systems were barely operational. In the fight, Shriek decided to bring down the bridge that the boys were on to distract Batman so he could escape. Batman took off to catch the boys but was only able to catch two of the boys leaving Matt to fall. Batman realizes that he knows the boys and takes off looking for Matt. Batman finds Matt under a pile of rubble and picks him up telling Bruce that he is breathing but it was really bad.

Back in the present, Tim and Matt continue their conversation. Terry quickly recounts how he met Terry McGinnis and realized that he had a connection to Bruce Wayne based on his fighting style. Tim asks Matt to continue with his story as they approach the gates to Wayne Manor.

Matt woke up in the hospital. His injuries amounted to some broken bones and Terry is with him. At first Terry blames Batman for not clearing the area before engaging Shriek. He shifts the blame to himself which confused Matt who says that he was not even there. In the conversation Terry reveals to Matt that he is Batman. Brother Eye then attacked which drew Batman into the fight and Matt never saw Terry again.

Tim and Matt enter the Manor and Tim takes him to the grandfather clock that leads to the stairs leading to the Batcave. Barbara is there and Tim and her start to discuss how Rewire was able to control the Batsuit. Tim asks Barbara if she has any leads on who the new Rewire is.

We move elsewhere in Gotham. An older lady, Mrs. Shelby is coming home and announcing her return to Davis (the original Rewire). We see that she is actually talking to Terry McGinnis and is calling him Davis Dusk. Terry is not feeling well and Mrs. Shelby commiserates that he has been persecuted and that has lead to his illness. Terry admits that he is having difficulties remembering and Mrs. Shelby recounts to him how she met him.

Rewire was in a fight to the death with one of Brother Eye’s cyborgs. As a final gambit Rewire was able to summon every bit of power and destroy the cyborg but in the process Rewire was mortally wounded . Mrs. Shelby approached Rewire telling him that he needs to go to the hospital. Rewire declines saying that he thinks he did something wrong that will put him in prison. Mrs. Shelby calls Rewire a hero. Rewire does not remember who he is and Mrs. Shelby calls him Rewire and then tells him that his real name is Davis Dusk. Rewire removes his helmet which reveals him to be really Terry McGinnis. A thug runs up and knocks Mrs. Shelby over stealing her money. Terry tries to run after him, but he collapses saying that he can’t breathe and his heart is hurting. Terry finds that his costume is actually wired to his chest and Mrs. Shelby surmises that what Terry needs is a fresh battery. She gives him a battery and Terry decides to stay with Mrs. Shelby.

Back in the present Mrs. Shelby and Terry continue their conversation. The problem is that Terry needs more and more powerful batteries to keep him alive. Then she tells Terry that the real problem is Batman. She says that since Batman keeps stopping him from stealing the batteries then he must want to kill Terry. She continues saying that Batman hates him. In the next panel we see that Mrs. Shelby is really Spellbinder and he convinces Terry that his only chance is to kill Batman. Next issue Confrontation.

This issue basically is a way to give us two back stories. One is definitely real and the second is more than likely false. We see Matt’s first and last meeting with Batman as well as Terry’s supposed first meeting with Spell Binder/Mrs. Shelby.

Overall this is a good issue, we get into the character of Terry. He shows that he is growing from being a thrill seeker to being a responsible crime fighter. I still want to know how Terry ended up here now as Rewire. I hope to find that out next issue since that will be the last issue of this arc. I hope this issue is the calm before the storm.